We had a full Crow Patrol outing with over 30 attendees. Prior to meeting up with the group, we made a scouting run by the airport, over one mile away, and observed 3,000 Crows staging in and around the NE end of Runway #23. After that,  we moved to the planned vantage point on south side of Merrimack River, close to the pump house at end of North Main St. 30 attendees joined us after word went out about a last minute Crow Patrol outing. 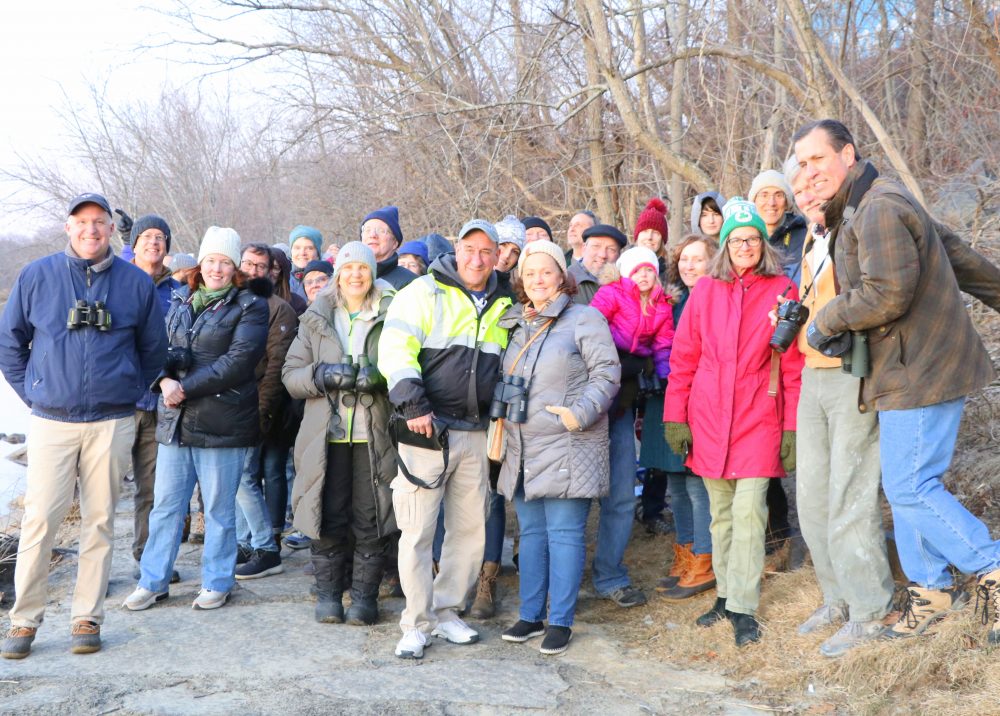 The Crows made final staging about 1/2 mile downriver. This is the regular final staging area along the river. The Crows gather here is growing numbers usually starting right after sunset. Often times, the Crows will burst into flight, circle around a few times and settle back in to perch locations in the nearby trees. Many nights, they start to make their move, almost like a whistle being blown, and they make the initial flight movements towards the overnight roost. The image below shows the initial flight liftoff taking place about 22 minutes after sunset time! 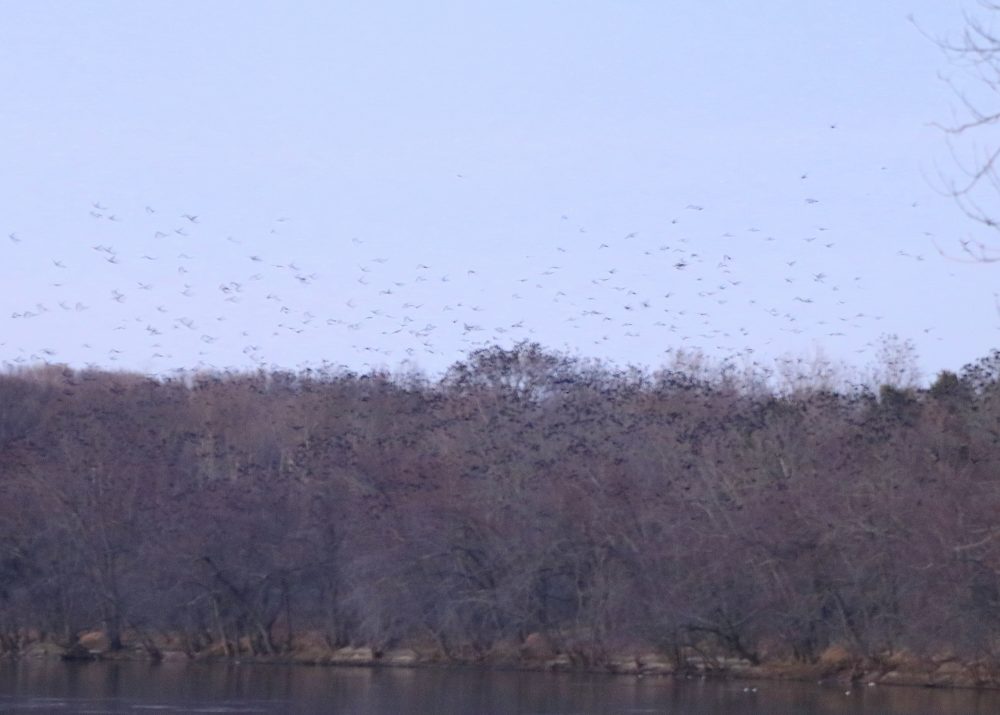 Over the next 10 minutes, we observed a massive and growing swarm of Crows moving in flight over the north side of the Merrimack River, one wave after another, and large numbers. Consistent with patterns over the past week, the Crows initially landed in the taller trees on the north side of the river.  From our vantage point, these initial landing trees are about 325 meters (2/10 mile) away and almost due north from our location. In the photos below, you can see the growing numbers in flight and the build-up of perched Crows in the landing trees. 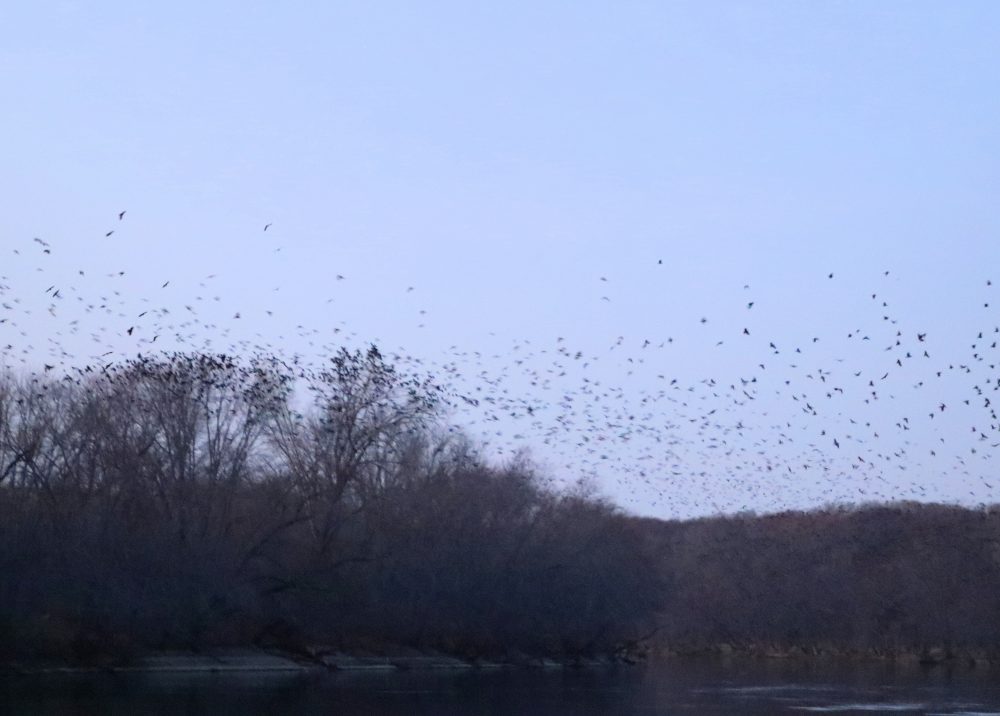 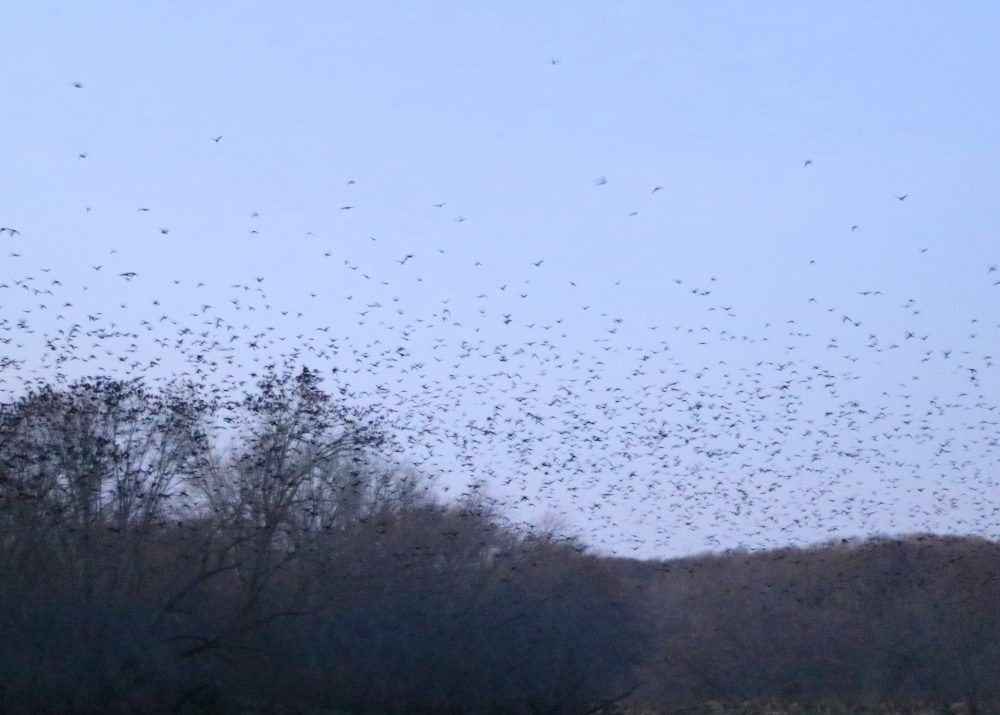 The number of incoming Crows surged in huge numbers and they kept coming one wave after another. From the landing trees above, the Crows then start to leapfrog from one set of trees to the next while moving towards the overnight roost. From these trees, the overnight roost is just over 350 meters away and upriver towards the Rt. 495 Bridge. The photo below shows the continuing flight movement about 28 minutes after sunset as the natural light of day starts to fade. 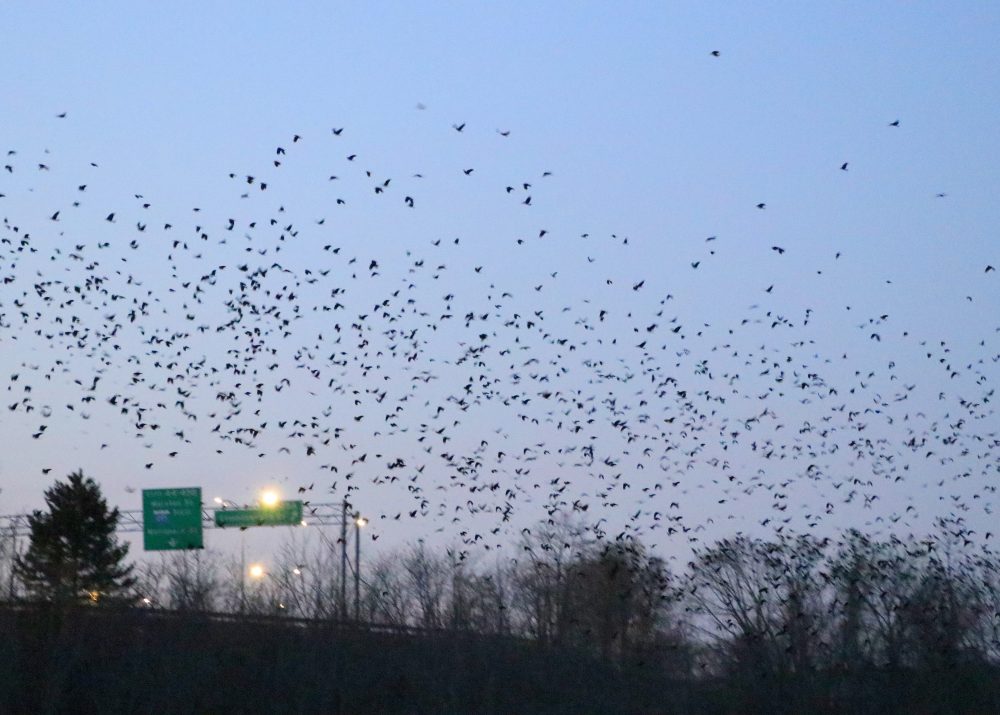 The photo below shows another massive flight swirl as the Crows converge into the final overnight roost area. Although there are a lot of flight gyrations and chaotic movements, the Crow do a fairly orderly job of getting into place and settling down when you consider all the numbers of birds involved in the process! 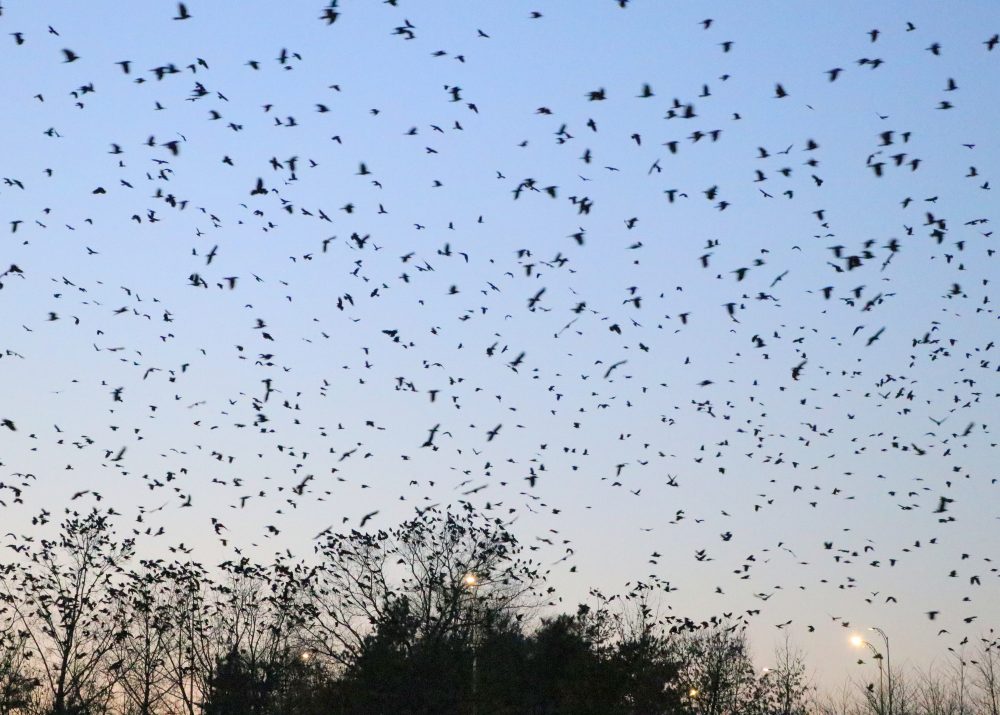 By 6PM, things had calmed down, the Crows were largely settled into the overnight roost, and vocalizations had fallen off as well. WOW, what a night all out there together being mesmerized by the Crows! This image below, utilizing a long exposure technique, taken almost 60 minutes after sunset time, shows the calm and tranquility once they all settle in for the night! 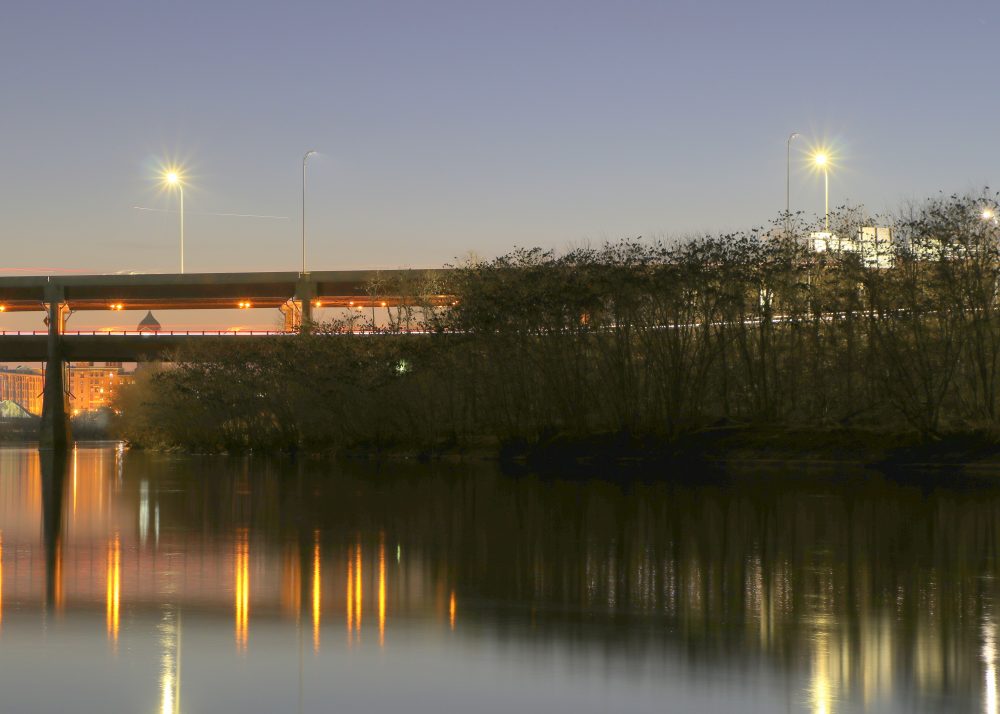 Finally, on my way home, while driving northbound over the Rt. 495 Bridge, had a chance to capture one last image of the overnight roost from an elevated vantage point, looking down over the roost tree tops. Again, the long exposure technique was utilized to capture a sharper image in low light conditions. It is always helpful to view the roost from as many angles as possible! 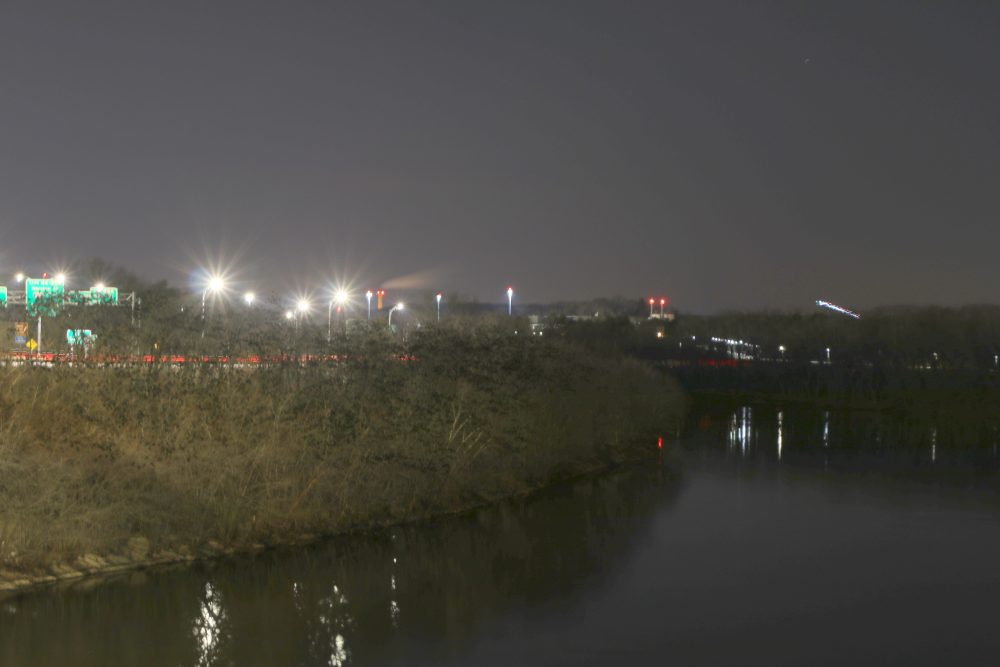