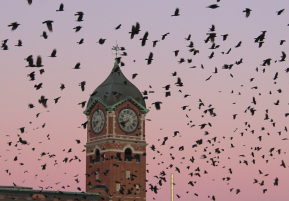 While by no means ubiquitous, winter crow roosts can be found in urban environments throughout the country. For decades, the city of Lawrence has been home to a winter roost that can grow to 25,000+ American and Fish crows from October to early April.

Just before sunset, these clever corvids stream in from daytime foraging grounds up to 20 miles away. They gather in groupings of hundreds or thousands, in locations referred to as staging areas. They then converge at a final roosting location to spend the night. The staging and roosting areas often change, making it a challenge to predict where the crows will be each night. However, The Crow Patrol is devotedly on the case.

Three birders, Dana Duxbury-Fox, Bob Fox, and Craig Gibson banded together a number of years ago. “At that point, we were just a group of birders doing what birders do, spending many nights observing and documenting the crows’ behavior,” says Craig Gibson. Their visibility quickly grew through regular posts on local states’ listservs, eBird, and their blog at wintercrowroost.com, which now clocks in with more than 7,000 visitors. This enthusiastic trio is now conducting informal guided tours and talks for academics, scientists, birding clubs and conservation groups, including Mass Audubon. Next season may involve a research project with Tufts Veterinary School and MassWildlife.

While many in the Lawrence community had, for years, witnessed the crows showing up in their neighborhoods by the thousands, most didn’t understand why. Thanks to The Crow Patrol’s outreach efforts, the winter crow roost has become a catalyst for artistic expression, community engagement, and citizen science in Lawrence.

If you would like to follow the adventures of The Crow Patrol, or experience the wonderment of the Lawrence crow roost for yourself, please visit
wintercrowroost.com and contact Dana Fox or Craig Gibson to inquire about joining them on a patrol.