2021 CBC Crow Count for the Andover Circle listed below!

As Geoff LeBaron, Director of the National Audubon Christmas Bird Count (CBC), commented on in a recent Massbird email…”Tis the season!” We were out this afternoon under gritty conditions for the 2021 local CBC on behalf of Donna Cooper and the extended Andover Circle team. For the local Crow count, we made initial scouting stops at the Incinerator Road baseball field area, along Prospect Street, and then onto the rear NE corner of the Lawrence General Hospital campus. We stopped and set up in the very rear employee parking lot and observed hundreds of Crows perched in trees, on the ground, and vocalizing loudly. The snow picked up quite a bit with heavy, wet, large flakes. This image below, captured about 23 minutes after sunset time, shows over 450 Crows starting to leapfrog from north to side, along the trees on the east hillside area along Prospect Street. 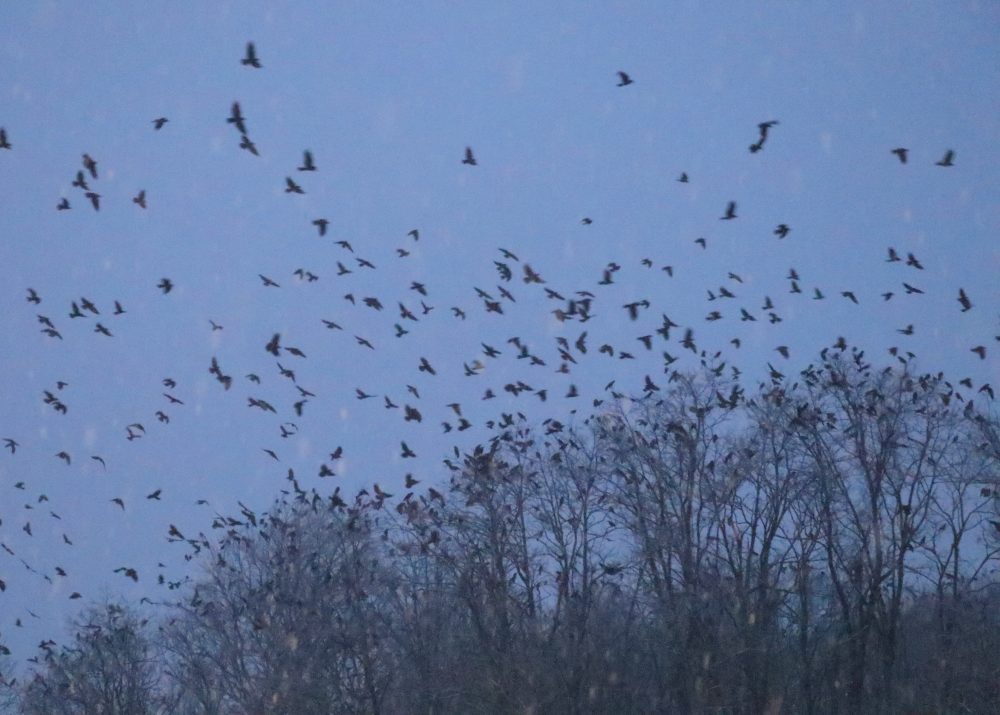 Flight streams just kept arriving from all directions and the numbers built up further. During this time the snow became heavier. This staging area built up and then the Crows very slowly leapfrogged down the line of trees on the east hillside area of Prospect Street around the hospital. During this leapfrog action, many more streams continued coming in from 20 to 40 minutes after sunset time. This image below, again about 23 minutes after sunset time, shows further the leapfrog flight pattern moving north to south along the tree line, with over 500 Crows, both perched and in flight. 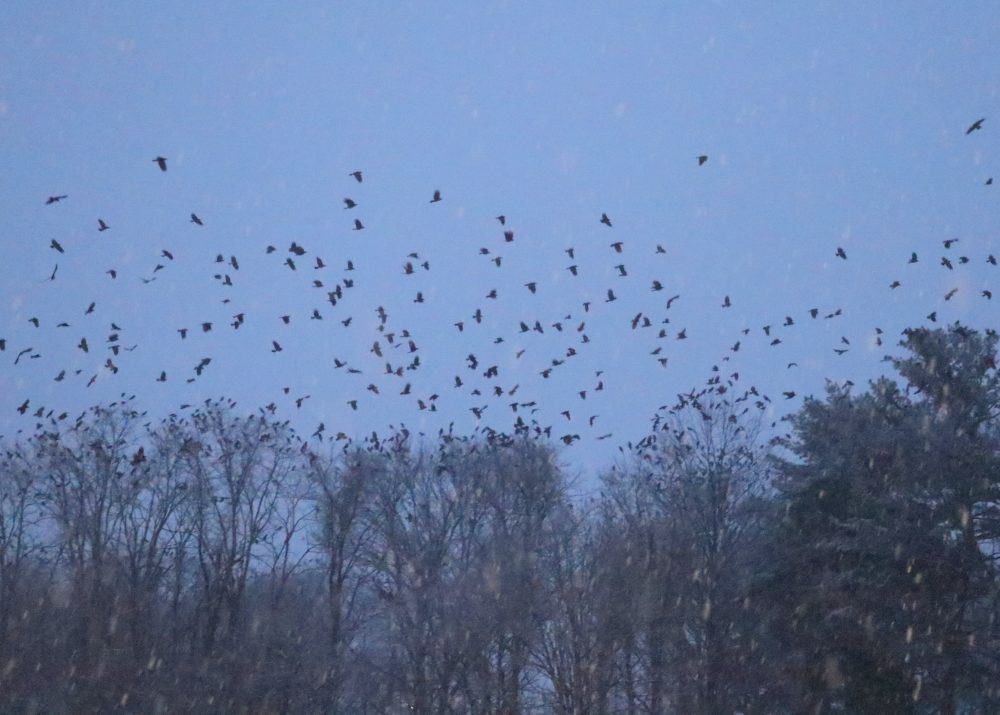 The center of the roost ended up being about 400 yards south of the initial staging area and just opposite a small brick hospital building at 38 Prospect Street. The snow continued to fall, and at first we had a big challenge setting up the infrared camera with the infrared illuminator. Will was determined to overcome the challenge of snow flakes being overly lit up in the foreground. So he moved the infrared illuminator away from the camera, but still directed it at the areas with increasingly dense groupings of Crows. This image, captured just over 60 minutes after sunset time, with the infrared camera, produced a fairly detailed and crisp look at a section of Crows, over 700 in numbers, perched in a tight formation, closer to the tops of these 60-70 foot trees. With long exposure settings, you are able to have a sense of the downward and slightly angled streaks created by the falling snow. 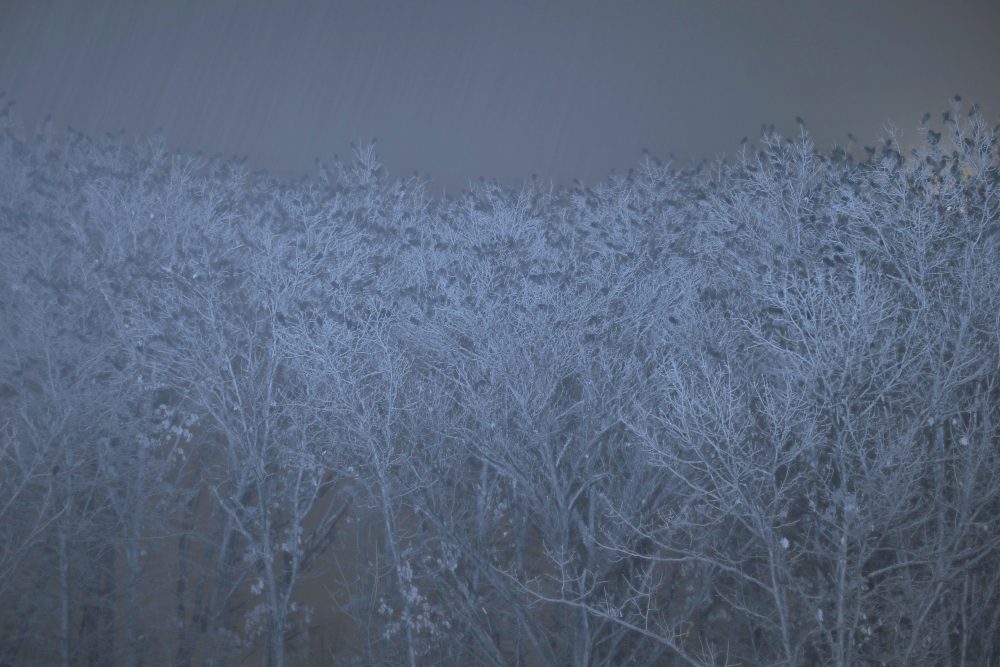 This next image of over 750 roosting Crows, captured about 90 minutes after sunset time shows the Crows filling in, not only around the tree top branches and twigs, but also more Crows moving in and perching at lower elevation levels. There was continued movement and jostling within the overall roost. This is, yet again, a new overnight roost location for this year. We have observed the Crows roosting in these trees before, but only for a few nights as they were moving around to many different locations, until they ended up just east of the Rt. 495 bridge. In this case, what is behind the change this year? We have had a lot of guesses, up until last night when we uncovered new time-lapse videos that clearly show the visit of a Great Horned Owl into a tree snag right in the middle of the roost Rt. 495 roost…..stay tuned for more!! It was another dazzling Crow show and a very successful 2021 CBC Andover Circle Crow count!! 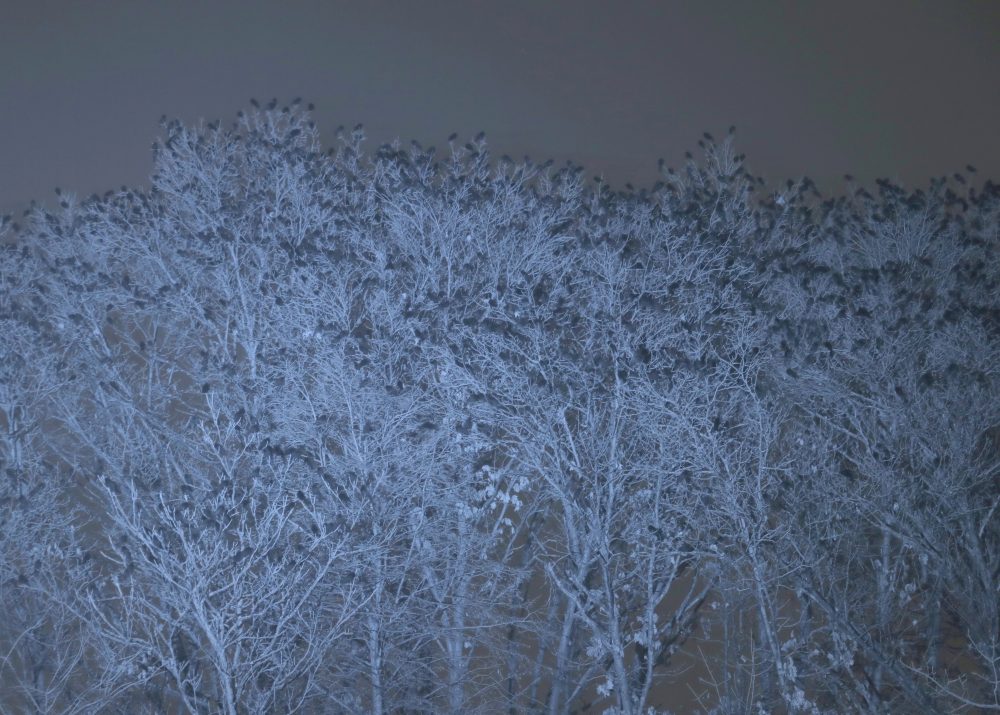 The preliminary estimate for the 2021 CBC in the Andover Circle for the special Crow Count is a total of 12,250 Crows. More details to follow in upcoming posts!