Out on Crow Patrol with John and Dugan starting just after 4:30PM. Steady light stream of Crows incoming from the SW and NW, moving in flight from upriver towards staging area in trees on the south side of the Merrimack River and in the trees along the railroad tracks, 4/10 of a mile downriver, past Charles St. This image shows the Crows starting to stream in from the NW over the Rt. 495 Bridge about 12 minutes after sunset time. 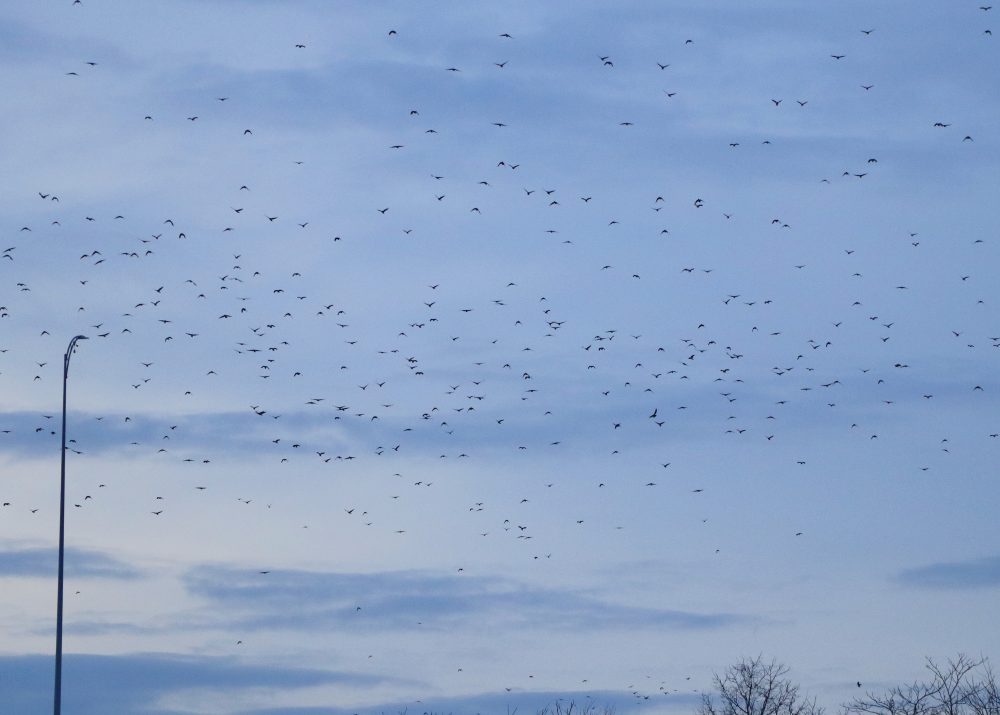 From our vantage point on the south side of the river, the initial incoming Crows all flew past our location, and continued moving downriver. What often times happens, is some of the Crows begin to move into the roost and others will do so and then burst up in flight back in the direction of where they had been staging. This image below shows a group of Crows moving past us almost 25 minutes after sunset. We were joined by Pam and Dick from Salem, MA., and then a bit later with Sydney from the local area. 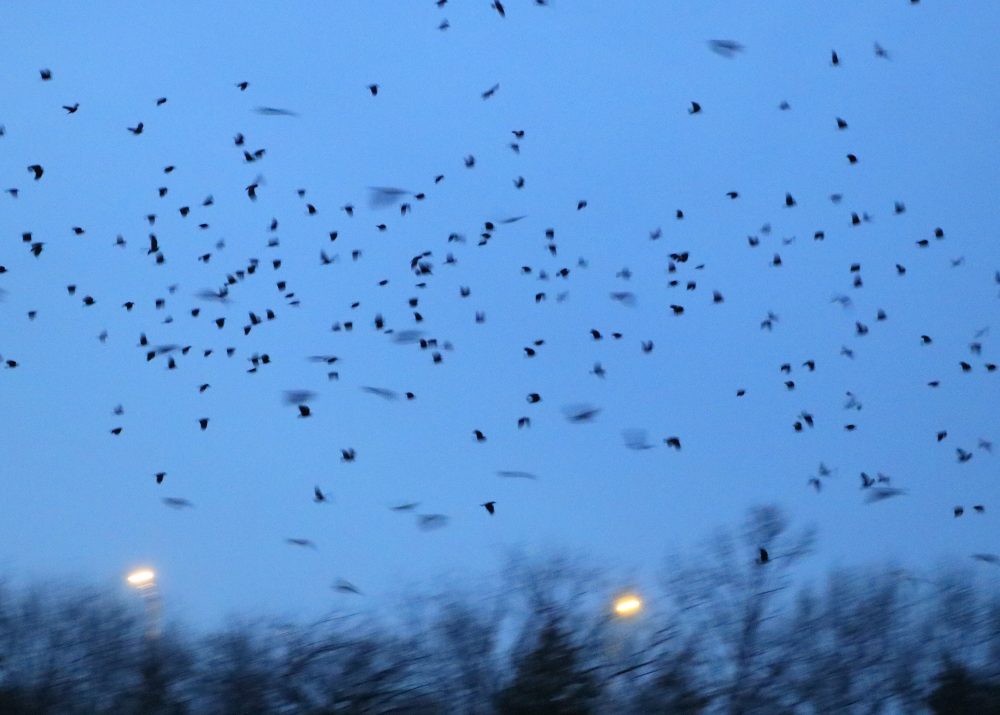 Overall tonight, we observed an initial wave of Crows progress towards the overnight roost. One of the leapfrog locations was in the trees about 300 meters NNE away and on the north side of the river. The grouping became very dense and then the Crows leapfrogged into adjacent trees along north side and closer to the Rt. 495 Bridge. Early on, the Crows began to roost on the south side of the river, and then larger numbers anchored in on the north side. The image below, taken about 27 minutes after sunset time, shows Crows perched in trees on the north side, and swirling in flight nearby. 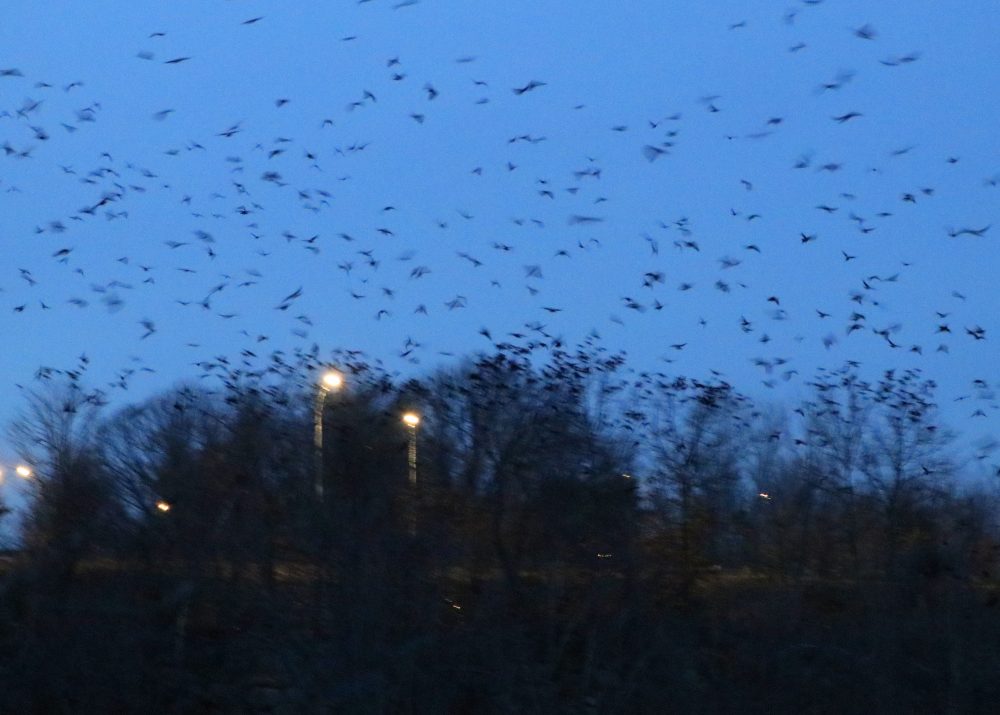 The Crows assembled in big numbers back into the main roost location, in the trees closest to the Rt. 495 Bridge. The convergence into this location became more pronounced between 25-35 minutes after sunset time. The vocalizations hit a peak about this time and we were yet again mesmerized by it all. For a while they were split, and then later all converged into north side roost! The image below, taken almost 55 minutes after sunset time, after the majority of the Crows had settled into the roost on the north side, shows the Rt. 495 Bridge with cars streaming by in commuter travel mode,  shimmering city lights reflected off the river, and the last rays of day light filling the western sky! Another WOW night out on Crow Patrol! 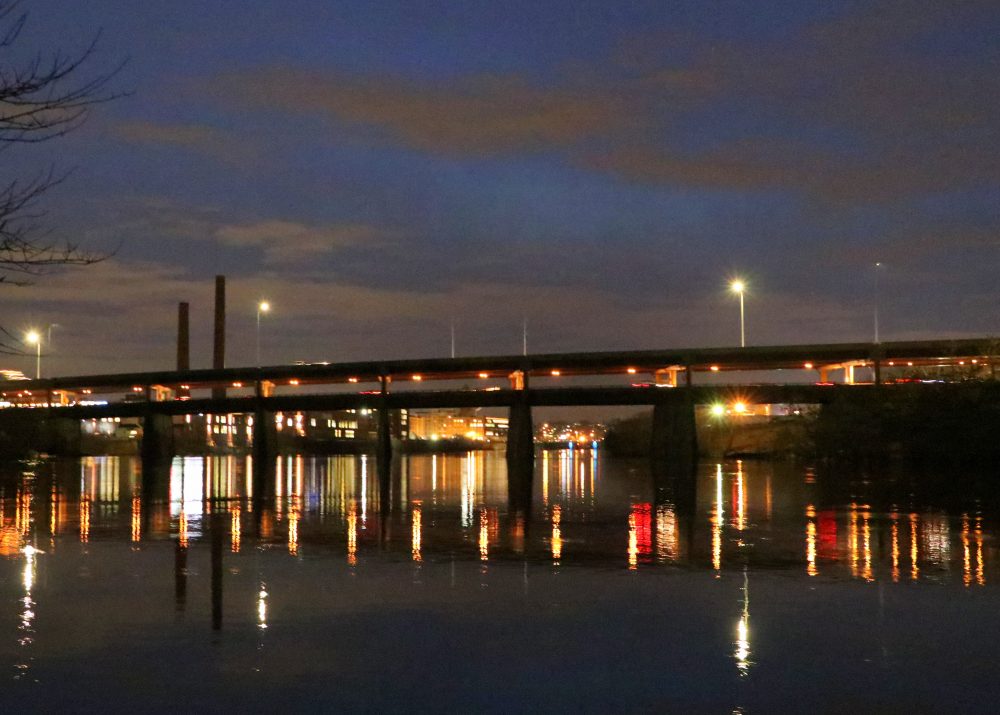