Settling into the overnight roost!

Out on Crow Patrol with first stop by the water tower and Storrow Park with Crows streaming and in and perching, but in light numbers; after observing flight streams that seemed to divert to the east, we moved over to the baseball field on Incinerator Road with great views against sunset skies. Large numbers of Crows were seen staging in the trees below the airport, and slowly leapfrogging in flight in the direction of the overnight roost. It always a blessing to take in, and observe the stunning sunset sky colors! The image below from the baseball field shows the Crows flying in from the south and heading towards Storrow Park minutes before sunset time. 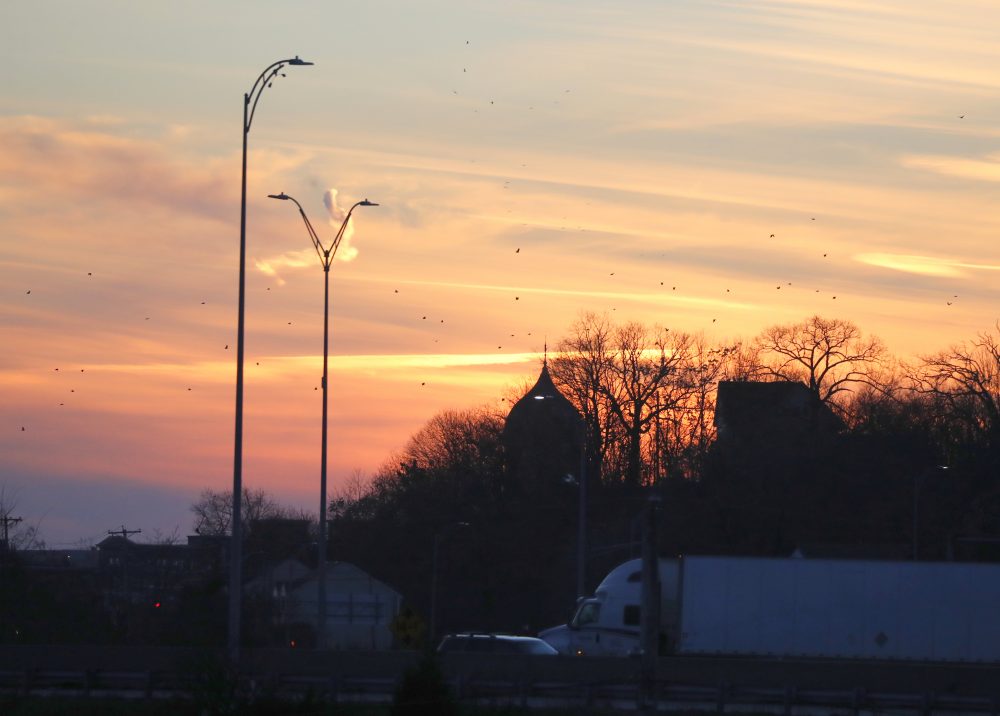 Two minutes later, while looking back towards the general airport area, and the hillside that slopes down to Charles Street and the railroad tracks, we were mesmerized by the flight action. The Crows kept surging up and down in dazzling flight patterns. This image below, captured minutes before sunset time, shows well over 800 Crows that were part of a string of dazzling flight bursts! 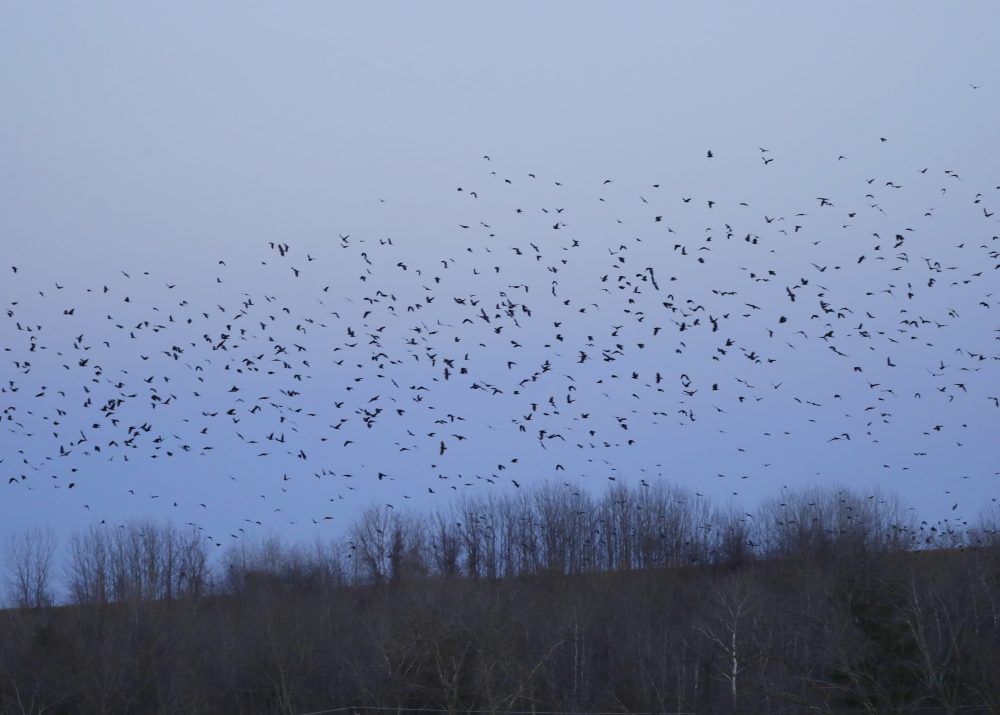 Just after sunset, we moved over to an area by Lawrence General Hospital and along Prospect Street. Crows were arriving in major flight streams from the S and NW, and landing in the trees on the east side of Prospect Street. This vantage point in the image below, in a parking lot on the north side of the brick building located at 38 Prospect Street, provided excellent views of Crows streaming in from the south. The image below, captured about 13 minutes after sunset time, shows over 450 Crows at a single moment, but as part of a larger and ongoing flight stream. 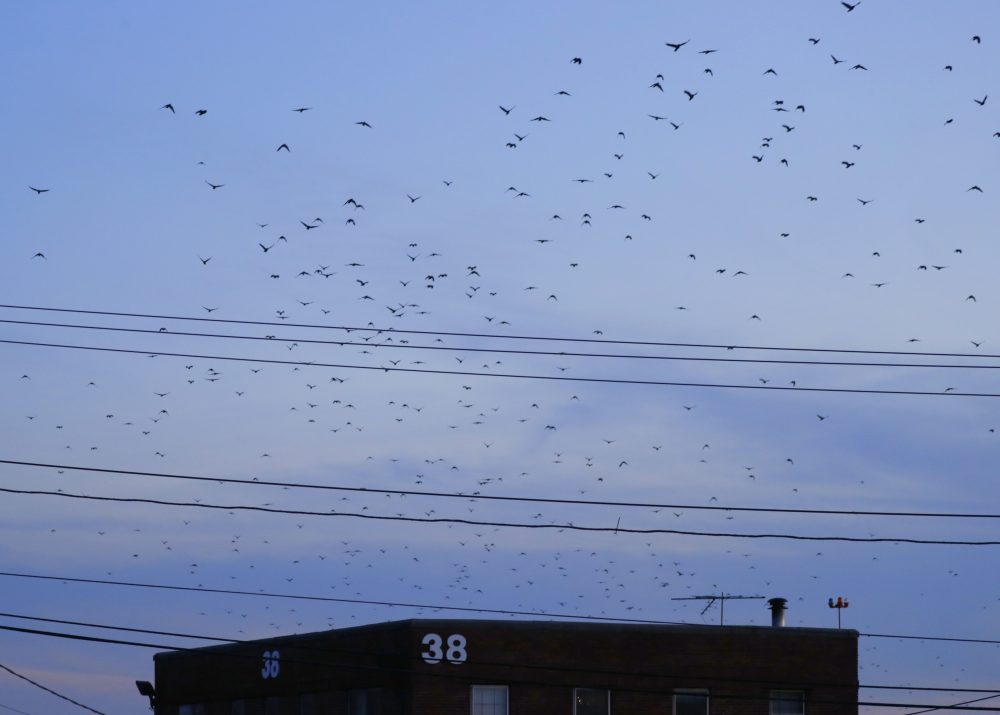 Many times tonight, we saw these dynamic flight bursts, with the Crows surging out from the trees, circling up and around the extended hospital campus area, and then returning to the roost trees on the east side of Prospect Street. There appears to be nothing that sparks these flights bursts, as in no visible predator threats. Might this be a way to alert distant incoming Crows about the location of the roost….fascinating question? This image below shows over 600 Crows in a flight burst about 14 minutes after sunset time. 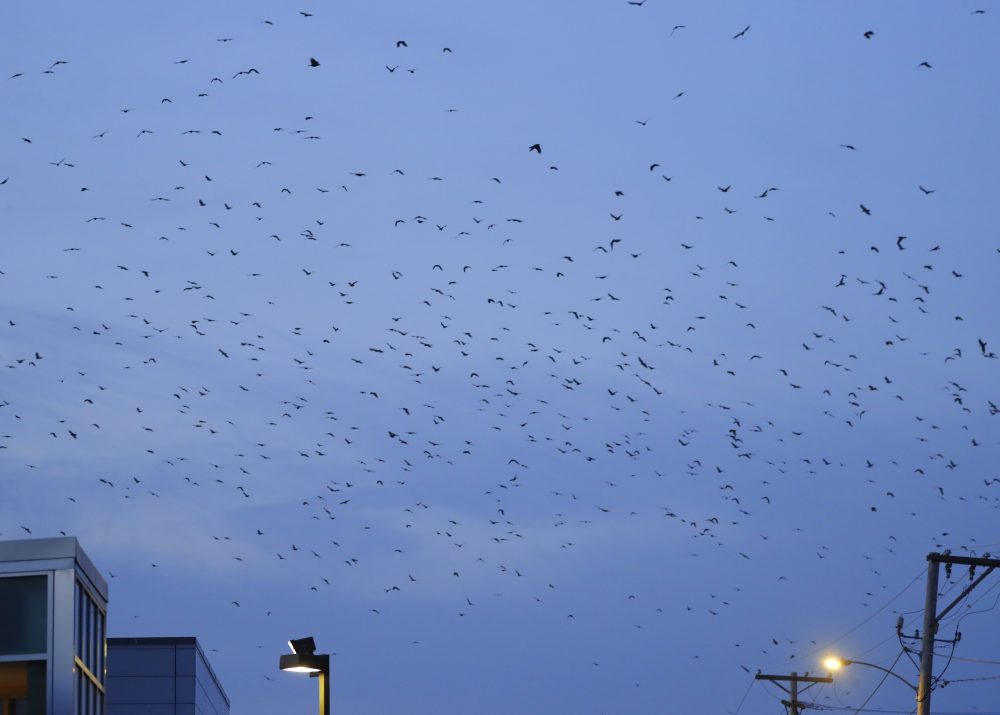 The Crows were actively vocalizing until they finally settled into the roost trees in tight concentrations, not only in the tree tops, but also at lower level elevations as well. This image below, captured almost 30 minutes after sunset time, shows over 800 Crows perched in one small section of the overall roost in very close proximity to one another. Again, the somewhat equidistant spacing between Crows is remarkable. Another amazing night on Crow Patrol! 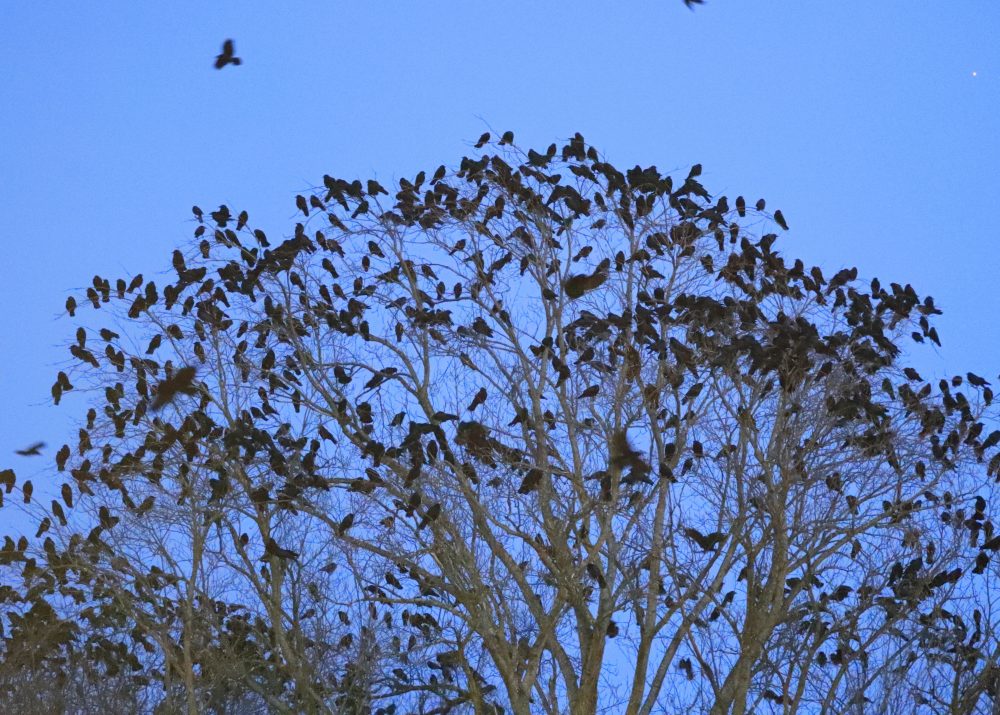