In an effort to broaden the gear and equipment used to monitor the Winter Crow Roost, we now have access to a wildlife research camera, a Reconyx Professional Series Camera. This Reconyx Professional Series camera is equipped with programming options to meet even the most demanding research projects. The HP2X we are using has a fast trigger speed of 0.25 seconds and a flash range of up to 150ft using the new NoGlow™ GEN3 High Output Infrared night vision. The night time images are fairly crisp and clear! This camera will assist us as we perform an initial round of time and motion studies to better understand flight patterns and convergence into the overnight roost. Here is a series of images captured tonight looking east from the Rt. 495 Bridge, with thanks to friends at MassDOT Highway Division for providing access. This first image below, captured about 15 minutes after sunset time, shows the Crows making the initial landing onto tree tops at the far end of the extended roost area about 300 yards to the east of the bridge. 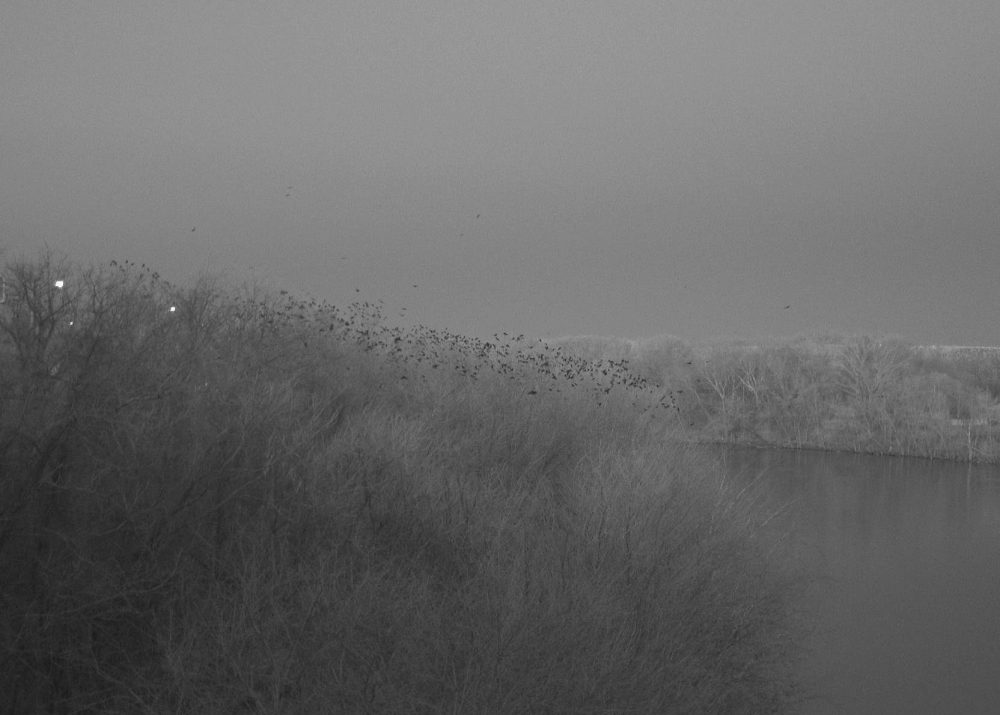 This next image below was captured around 17 minutes after sunset time. It shows more Crows converging into the roost, and an orderly pattern of filling in closer to the bridge, and landing on tree tops at both lower and higher elevations. The Crows are utilizing the full tree canopy and spacing themselves in a measured way. 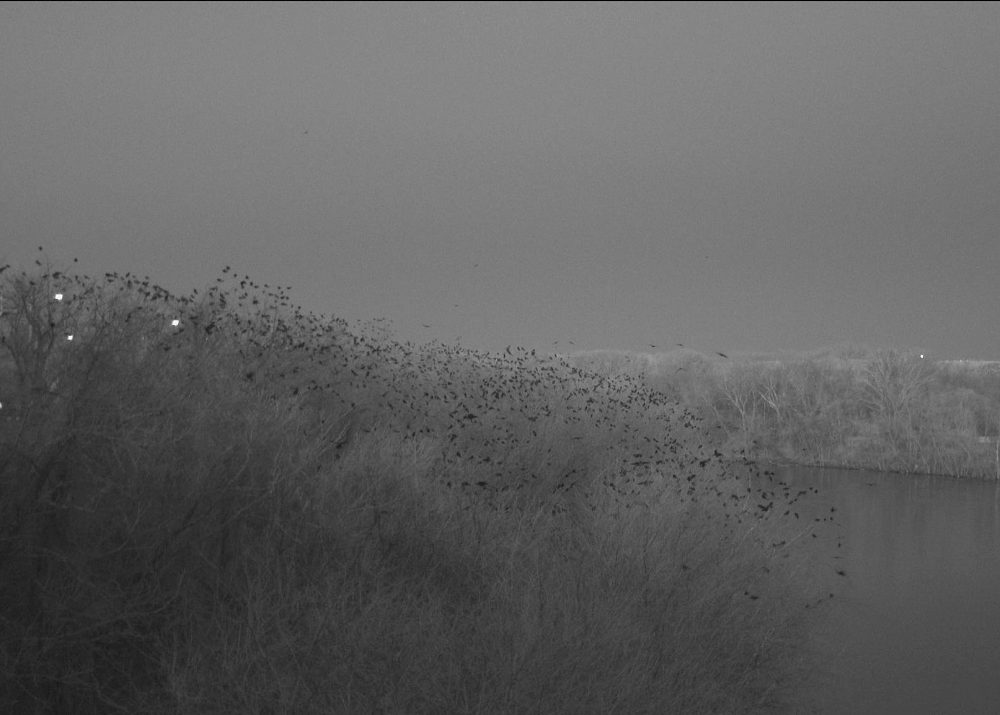 The next image was captured about 19 minutes after sunset time. The progression continues in a very orderly way, filling in and moving closer to the bridge. The stream of incoming Crows continues and they seem to know how to proceed and do so without much interruption to Crows that have already settled in. 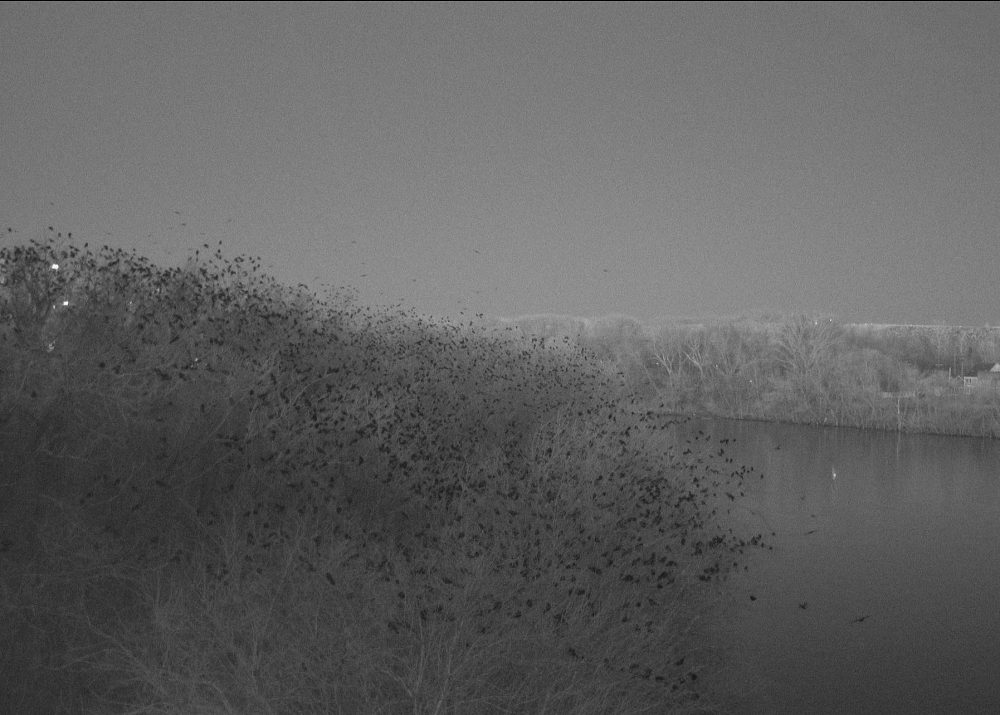 The fourth image below in the sequence, captured about 25 minutes after sunset time shows a much denser assemblage of Crows in the extended over night roost area. The Crows are filling in as more continue to converge into the roost! The sheer numbers entering the roost at this point, are starting to fall off, but fill in from top to bottom in the roost area.

The final image below, shows the overnight roost fairly well settled in as the light starts to fade. It appears that the Crows have to be in place by about the end of civil twilight. Each twilight phase is defined by the solar elevation angle, which is the position of the Sun in relation to the horizon. During civil twilight, the geometric center of the Sun’s disk is at most 6 degrees below the horizon. In the evening it begins at sunset. As the Earth’s atmosphere scatters and reflects much of the Sun’s rays, coloring the sky bright yellow and orange, artificial lighting is generally not required in clear weather conditions to carry out most outdoor activities. The duration of each twilight phase depends on the latitude and the time of the year. For tonight, sunset time was at 5:38PM and civil twilight lasted until 6:06PM. The Crows usually complete most of the roost convergence activity by the end of civil twilight! 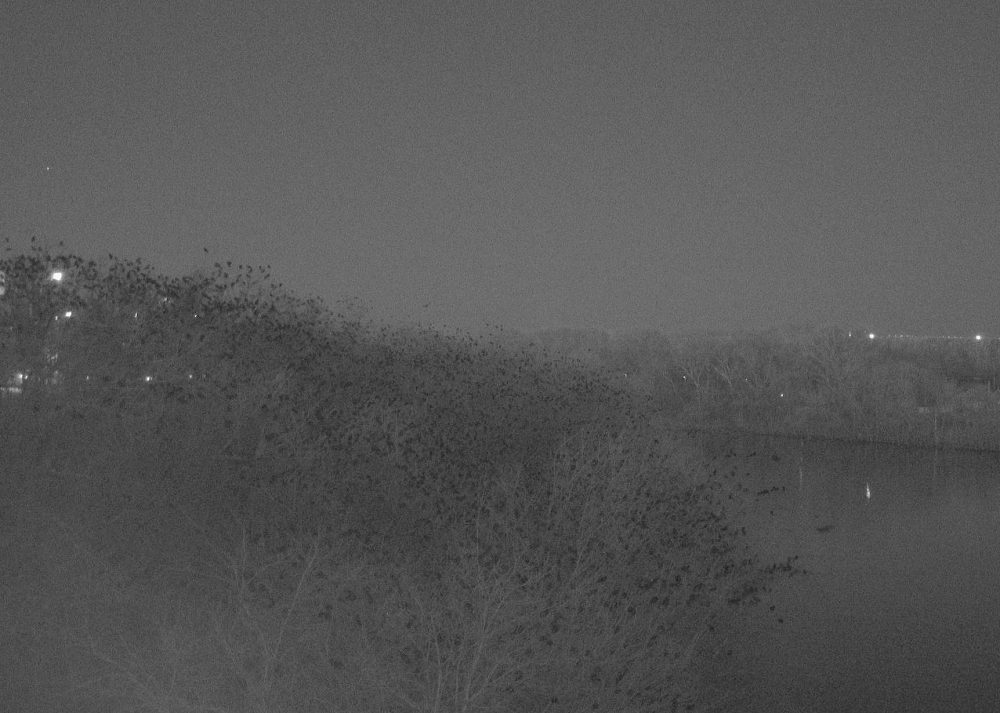 Hope you enjoyed this sequence of images and the start of our time and motion studies of the overnight crow roost. Feel free to fire away with questions or comments via email craig@wintercrowroost.com and I’ll get back to you right away!