Yesterday starting at 3:15 pm Bob and I enjoyed sharing the Lawrence MA crow patrol with Ann Banks from Gloucester, Jill Mathieu from Norton, Richard and Julia Osborne from Winchester and Mac McBurney from Arlington.

It was a rare, windless afternoon with temperatures in the 40’ s and a mostly gray sky making it much more enjoyable to be standing outside. We gathered at the top- middle of the New Balance Parking Lot off So. Union Street and looked eastward to see the directions the crows were flying. They control the show and you never know where they will be headed. Who determines this each night? How do they all know where to stage? 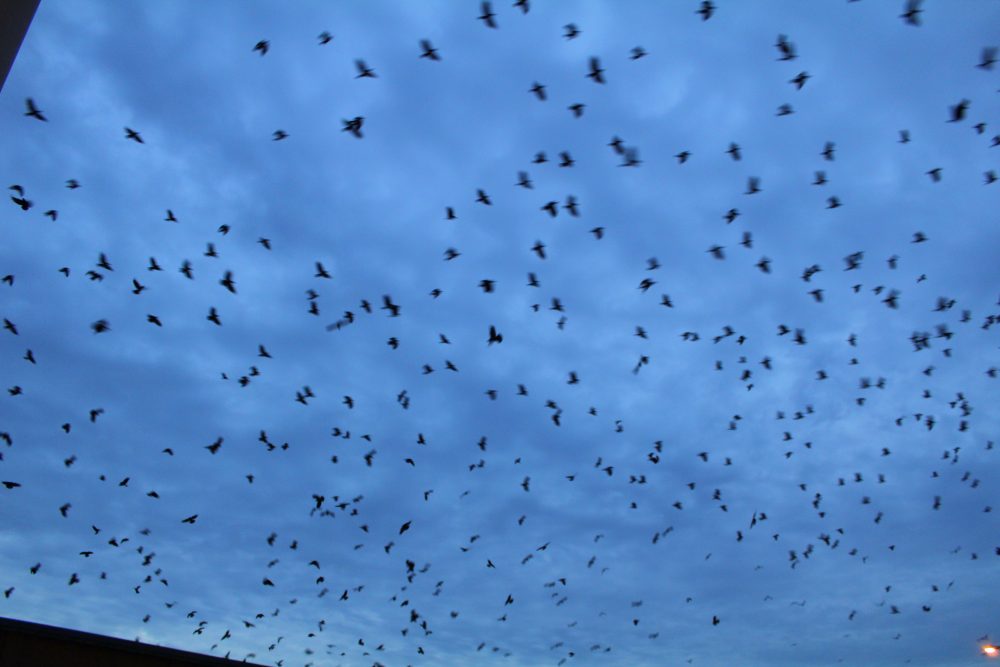 Well, yesterday when looking over the river to the far east we saw them flying south over the far-red brick mill buildings – NOT staging on the north side of the river as they had on Tuesday. Looking down So. Union St to the south we could see some coming in from the west and going behind the Riverview Mill building. So off we went to the Parking Garage. We entered the door on the corner of Merrimack and So. Union and found a non-functioning elevator and a staircase. So up we walked 5 stories to the open top. No cars there but a wonderful view to the east, south and west. The din of cawing crows could be heard to the south of us and crows were streaming in from the south, east and west. Thousands of crows were perched on the tops of the tall trees on the south side of the South Common Park (which until only a few days ago had been filled with trailers and tents for those whose homes were gasless).

We were all spell bound by the waves of thousands of crows – some streaming in from the southeast, then from the east over the mill building, then so many waves from the west and northwest. Some settled in the trees nearest the garage and one silhouetted against the lighter western sky kept making this impressive rattling call all the while pumping his body back and forth. As twilight settled in, they began to move to and settle on the roof of the B&D storage building to the west of the garage – oh, so many speckling the roof with black bubbles. A train came by and caused hundreds to rise. We heard a Fish Crow as it flew by. Amazingly, more birds kept flying in now most settling on the roof below. Bob counted the birds on the roof, tree tops and the last ones coming in and estimated 25,000 birds. It is a rare spectacle.

At one point, Craig Gibson was down on So. Canal St below us. He knew we were all there, assumed we were on top of the garage and even took a picture of what he thought was our many band. He saw many Fish Crows on the wires around the Truck Depot and the National Grid parking lot. 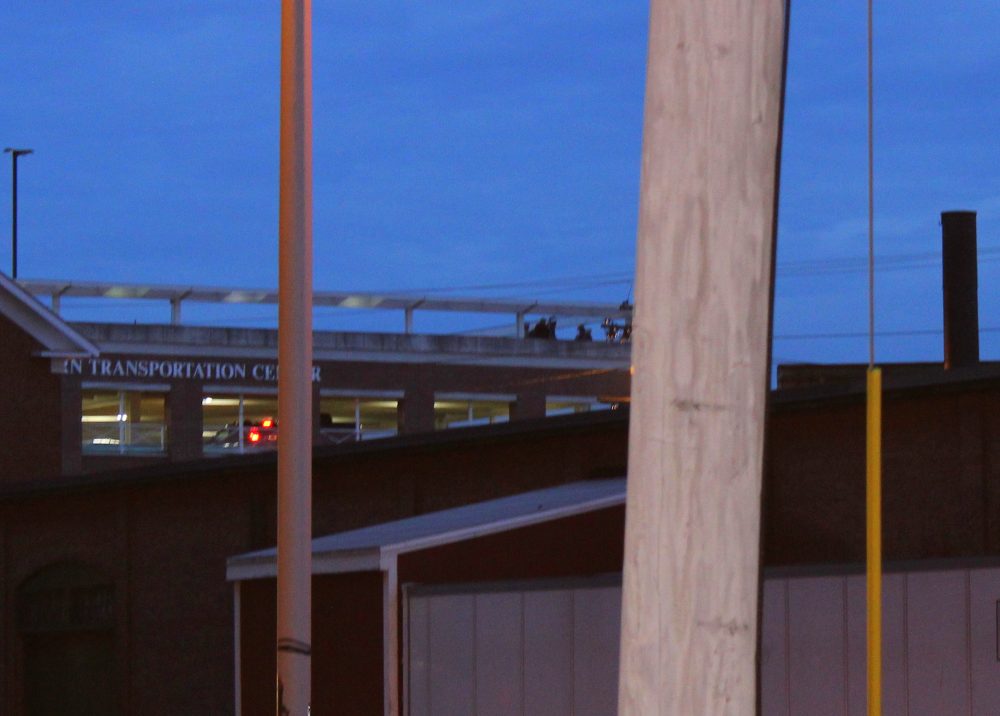 As it got dark, most of us found a functioning elevator on the south-central side of the garage including a heated glass walled area. Once down at the corner of Merrimack and South Union Streets, we could see birds flying across Merrimack St. headed towards the thin line of trees on the south side of the Merrimack River. We all walked up by the door into the New Balance Factory Store and out onto Duck Bridge. Looking into the lighter western sky you could see them coming around the building and settling into the tops of the thin line of trees – still some distance from the bridge. Some nights they are very close, and they may have eventually filled in last night. 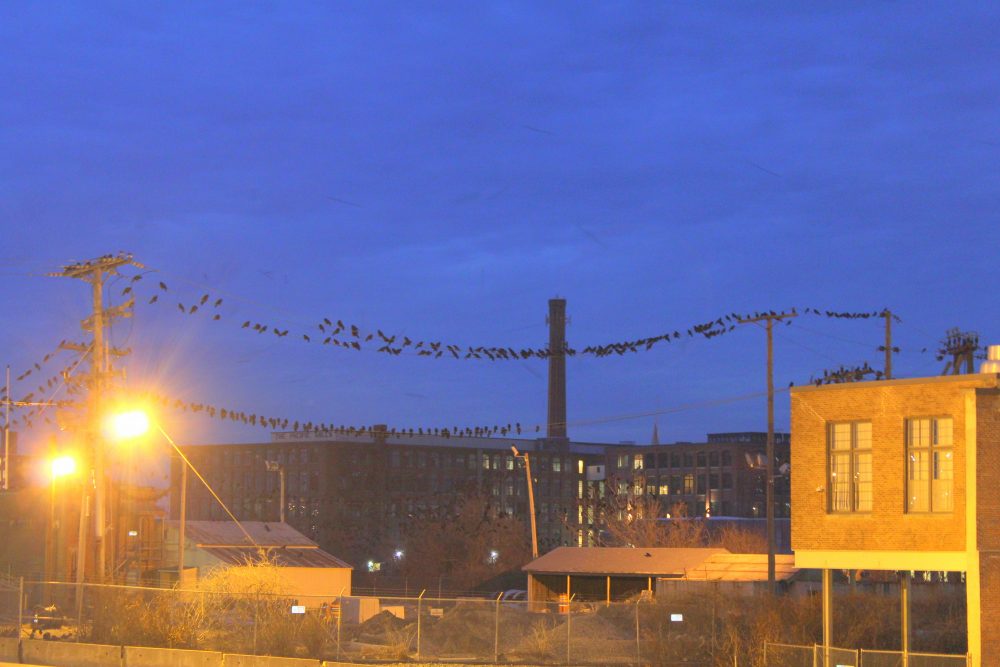 We all reflected on what we had seen – a true natural phenomena. They all were amused to see how excited I can still get watching this grand show. Hopefully, you too will soon come to see them. Periodically, we will invite folks to join us but if you start and watch the evening pathway from the New Balance Parking Lot and follow the show you can easily replicate our pattern. DO REMEMBER TO BRING BINOCULARS.

We travelled to Orlando FL last week-end to see our 10-year-old granddaughter star (and did she star) as Dorothy in the Wizard of Oz and still could not escape the crows. At one point, the Scarecrow is surrounded by a circle of crows all cawing away. I just chuckled – little did those around me know why!

Today, Craig is delivering to Tom French of the MA Fish and Wildlife over 150 pellets disgorged by the crows which he picked up in the truck depot parking lot over the past few weeks. Tom will dissect then and give us a report on what the crows have been eating. We look forward to comparing them to the ones we had dissected by Tom from early December last year. 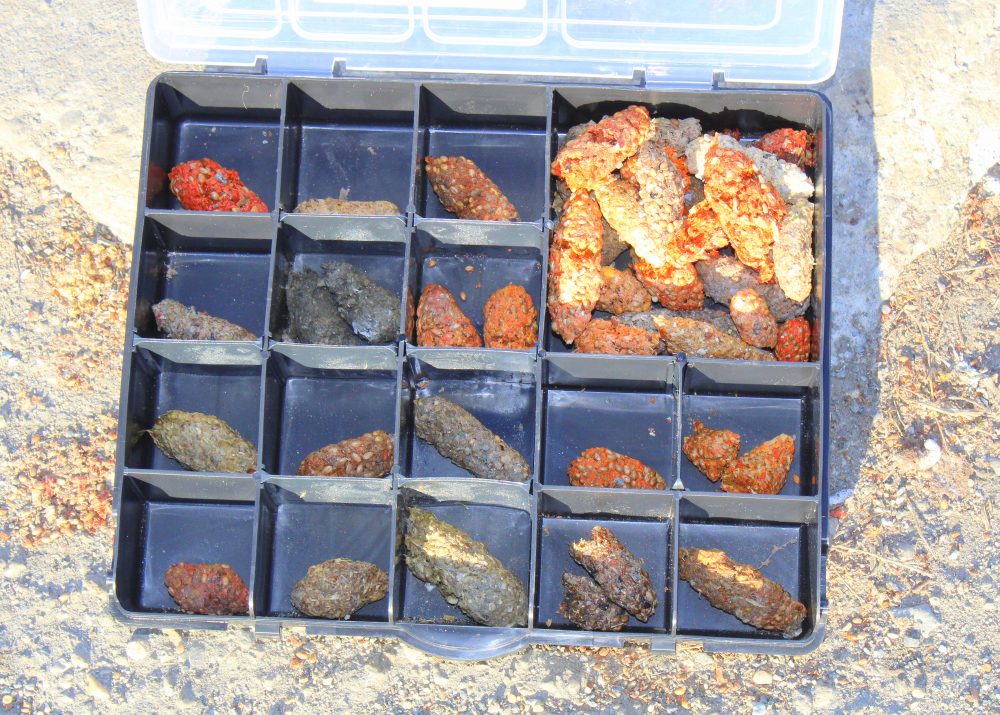 Do explore our blog: www.wintercrowroost.com

Have a joyous holiday season, enjoy the crows and do post what you see or send us the highlights of your visit.