Last night was a memorable and beautiful night on Crow Patrol in Lawrence MA. We met Cheryl Dean of Newburyport, Rinky Black and her sister from Erving, MA and Judy Rogers of North Andover at the New Balance Parking Lot an hour before sunset (3:17 yesterday). Richard Osborne and his wife Julia who had previously visited with us were there exploring on their own.

As stated previously, you begin by watching where the crows are flying to start each night. Last night they were flying to the south over the Riverview old mill building to our right. That meant they were going to the So. Common Park which is along Market St. – we had seen a few gathering there on our way cross country to the parking lot.

Again who determines each night where and why they settle on a specific place??

After describing where you look (though your binoculars), and seeing some of the first waves coming in from the east over the North Andover Lawrence Airport and their moving south – NOT up the river, and seeing a few come in from the north, we headed over to the parking garage on foot. It was a sunny late afternoon in the mid-30’s with very little wind. Some walked up as the near elevator is broken and some went up by the elevator near the train tracks.

Once up there we were regaled by thousands in the tall trees in the common, a few in some tall near trees. Then the spectacle began – waves from the west and northwest peppering the sky – so attractive in the colorful sky due to the setting sun and framed by the tall old mill chimneys and church steeples. Some began to gather on the roof of the B & D Warehouse to the west.

Waves came from the east, the south, on large wave wove itself around the attractive Bell tower which sits over the New Balance Building. A few Fish Crows called and sat briefly on the light poles nearby giving just enough time for us to describe how you tell the difference between them and the American Crow. The din of thousands of crows cawing, a few giving that strange rattle or burring call surrounded us. A train came by and set thousands into the air. More gathered on the roof below. A beautiful sunset peppered with crows graced us and as light began to fade, some began to head to the roost. Now after sunset, we returned to the parking lot and saw them adoring the small trees along the river along the edge of the New Balance Factory. Black bobbles against the western sky. Bob was counting away and got to 24,000 last night!!! 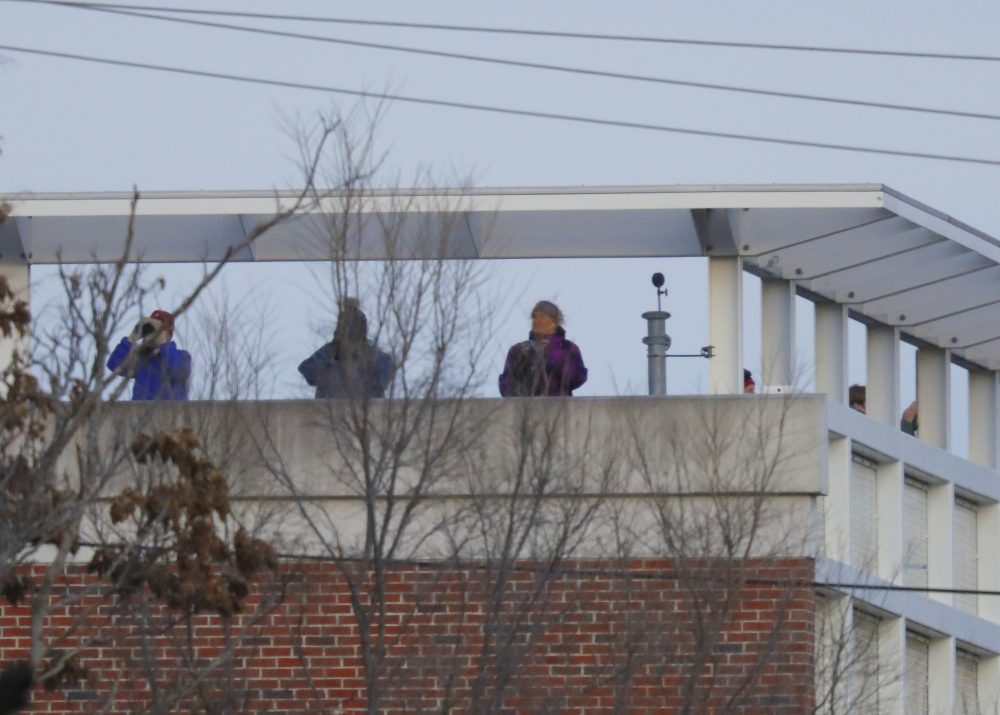 As Rinky Black emailed me, “Thanks so much for sharing the excitement of the crow roost with my sister and I yesterday. It was amazing! Even my non-birder sister was enjoying herself.”

Please read about other nights and some of our references on our blog: www.wintercrowroost.com

Plan to visit the New Balance Factory Store and local restaurants – they all need a lift after this fall’s tragic gas problems.

Well, stay tuned for our next entry. I will let you know when we are going out next if you want to join us or follow our route. Let us know what you see.