With darkening skies, storm warnings, distant lightning, and under very forboding overcast skies, wind from E at 3MPH, and temp at 56F, the Crow Patrol was out in full force last night. In an effort to search for staging locations to the east of the overnight communal roost, headed east, around 5:15PM, winding my way through parts of North Andover, and ending up at the Lawrence Municipal Airport (LMA overview at end of post). Discovered staging Crows along Charles St. near the treatment plant, and then all along the SW corner of the Airport as seen from side streets off of Sutton St. 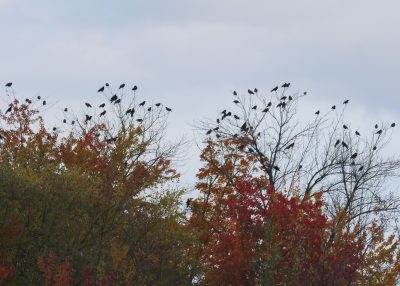 Then drove into main entry at Lawrence Municipal Airport, and spent time observing Crows from open area in parking lot with views mainly to the NW, N, and well to the W; it provides an elevated viewpoint with nice visibility.  Observed lots of Crows perched in trees along the W and SW perimeter of Airport; many other seen streaming in from the east, in groups of 100-250, or so; 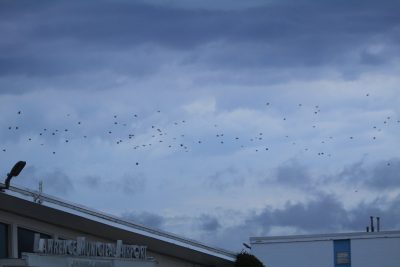 The skies were getting darker and flashes of lightning were seen well to the west, moving towards the Airport; swarms of Crows were passing by, and many were settling in to perch in trees along perimeter of Airport; then made way back to meet with Dana and Bob at the New Balance factory on South Union St. along the Merrimack River, just as dark settled in and the rains came!  Dana and Bob were parked in New Balance parking lot on east side of South Union St, at the top of the lot near the street.  This vantage provides great views to the east, looking over the Merrimack River and the Airport.  A number of Crows were perched in the trees along this lot, but a bit of a challenge to see with dark setting in: 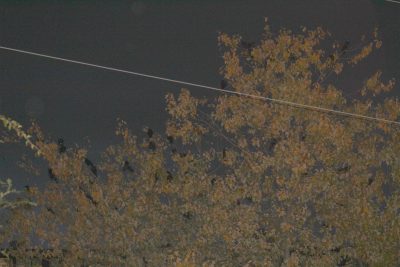 Before leaving close to 6:30 PM, walked onto the Duck Bridge, and observed the Crows in the Silver Maple and River Birch trees.  These Crows were settling into the final overnight roost.  At this point, they are still vocalizing quite a bit and more Crows were streaming in.  At times, a number of them will shake free, swirl up in the air and settle back in.  The lights from the New Balance factory provide sufficient ambient light on trees close to the building; it is a bigger challenge to view the Crows on the outside of the trees that overhang the river.  This final photo shows the both the perched and swirling Crows from out on the Duck Bridge, looking WSW, with the lights from the New Balance building in the upper left, distant smokestacks, and lights from the Casey Bridge in the far background: 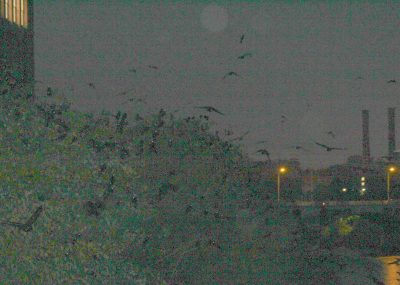 Note: Crow count was over 1500, which is conservative, but consistent with Ebird guidelines; actual count higher!

Lawrence Municipal Airport is a public airport located two miles east of downtown Lawrence, MA.  The airport is located in the town of North Andover, but is owned by the City Of Lawrence.  Lawrence is within Essex County, MA. The airport covers an area of 420 acres and has two lighted and paved runways.