First of all, the Crows coming into Lawrence MA FOR THE WINTER CROW ROOST HAVE CHANGED THEIR STAGING AND ROOSTING PATTERN. We suspected this would happen based on last year, but when and why? We are now more like the Keystone Cops and are in our “Where’s Waldo” mode!!! We welcome you to our adventurous winter ride!!!

As you remember we had record cold over the weekend, snow (about 6” here) and the mighty Merrimack River had frozen above the Great Stone Dam to the west of Rt. 28 Broadway St. We did not go out Saturday, Sunday or Monday. On Tuesday, the 22nd, the crows suddenly staged .8 miles north of their previous location (South Common off of So. Union St.) along the Spicket River. After much consternation on their part, well after their regular staging time (now in the full darkness), they moved south to their traditional roosting spot along the Merrimack River beside the New Balance Factory.

Wednesday the 23rd, there were none around South Common, but we followed them and found 10,000 on the ice just above the dam and in the trees above that area. Many of them made at least three furtive attempts (in the dark) to move eastward to the original roost. After two hours, they did not move into another roosting location and many were still on the ice when we left about 6:30pm. They were .8 miles from the original roost. (Interestingly, last year on January 9th, after a couple weeks of very cold temperatures and the Merrimack River freezing above the dam, they began three month epic journey around Lawrence staging and roosting in different locations). 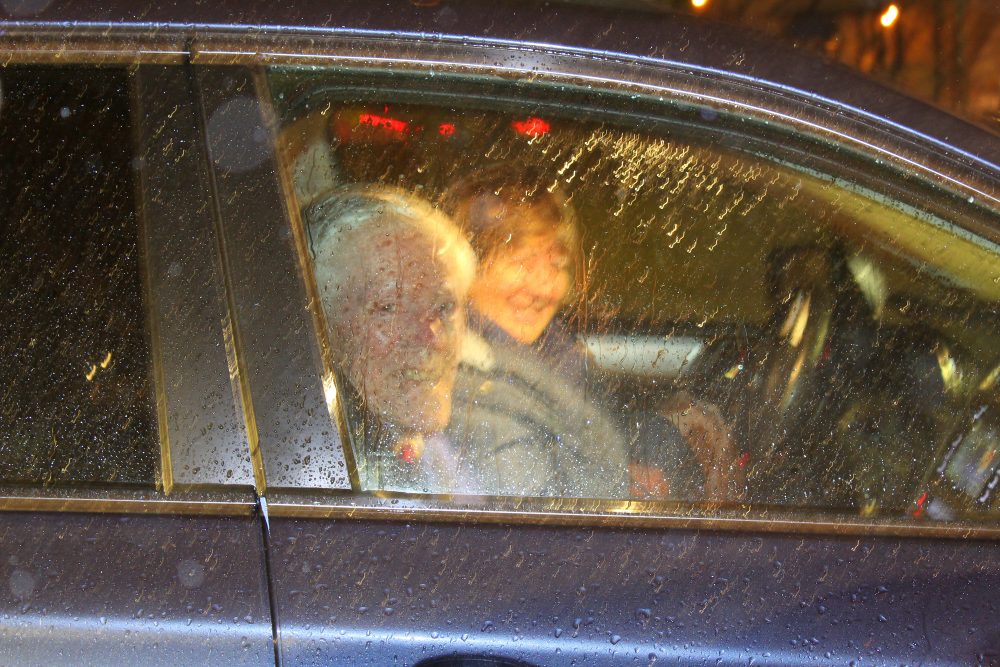 Reporting from crow patrol Thursday January 24th – In the pouring rain last night, Bob and I went in search of the crows. We went out just before an hour before (3:47 pm) sunset (4:47 pm). It was raining heavily as it had been for much of the day and very cloudy but it was about 40°. We saw our first crow at 3:53 pm. This one and soon others were moving westward along the Merrimack River and up over the Rt. 28 Bridge. We watched from our favorite spot on the NW side of the river – lots of puddles on the ice, no crows on the small patches of ice or in the trees above. But there was an adult Bald Eagle on the ice eating some dark bird and 1,000 gulls moved off up river – no chance to ID them. (This is a favorite gull gathering area in winter – we had numerous Iceland and a Glaucous Gull last winter). Crows were flying west above the trees over the south side of the river. All of this was observed in pouring rain which required us to frequently turn on the wipers to get a better view. 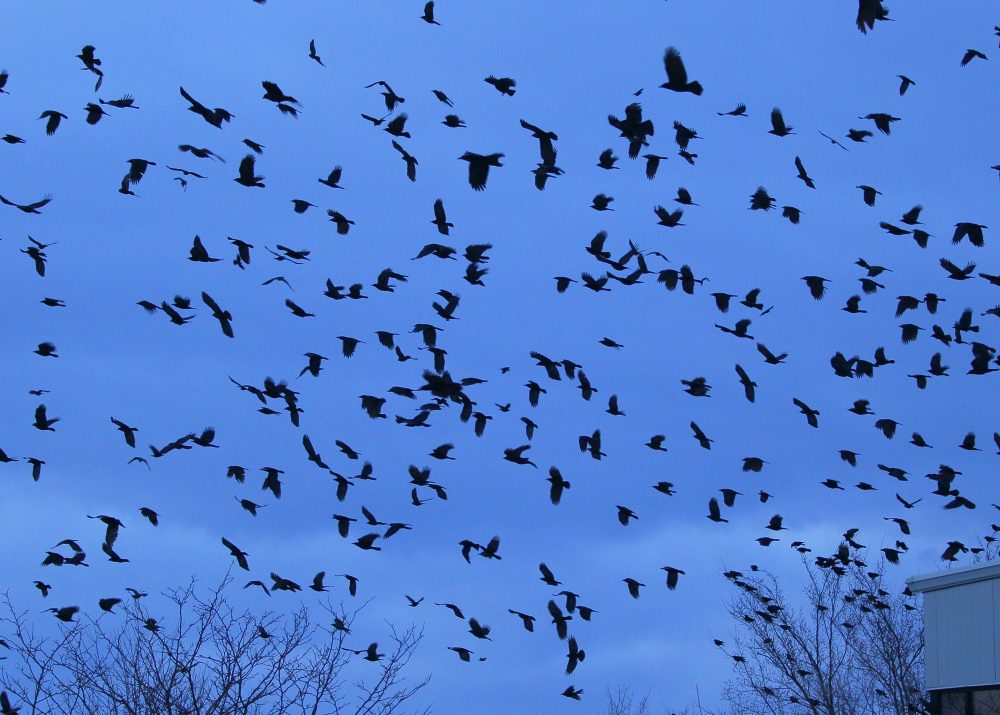 So off we went back over the bridge turning right at the second light onto Shattuck St. which becomes Rowe St, passing in front of the Lawrence Experiment Station (a state water quality lab) and over to the edge of the river on the little side road in the State River Park. Crows were streaming by from the east and there were many staging in the trees ahead along the river. As some crows seemed to be moving further along we drove out onto what is now Everett St. turning right and then headed up and down a few of the small streets that go nearer the river. Some crows were even gathered around houses. Fish Crows were eating red fruits in one yard. I could hear crows so we went back to Everett St and down Eaton St. to the Abe Bashara Boathouse. They have a big parking area with an open view of the river and trees to the east and the west. Crows were in the parking lot, and the trees to our left and right. Many crows were filling in the trees along the river beyond the boat house. Either a Red-tailed Hawk or a young eagle spooked quite a few. It kept getting increasingly difficult to see as the light was dropping and the windows were hard to see out of with the pouring rain. Yes, “Mad Dogs, and Englishmen” plus crazy crow watchers go out in the pouring rain. Bob noted two groups of a few thousand each out on icy patches on the river. Suddenly, masses of birds lifted off going right over and by us moving eastward along the river’s edge. Ok, now with it raining hard, getting quite dark, off they go. Of course, we followed but not as the crow flies – back out Eaton St. to Everett (turning left) and bending northward around that park and onto the little road. No crows going further east and we could just see birds densely packed into the trees along the river to the west of us. We watched for some time, and they never moved and amazingly more kept streaming in from the east and the west. Craig came to visit us at this time and he even got out in the rain to try and see them. This was home for the crows for the night we believe. Last night brought back many memories of following the crows last February and March in these same areas.

Do pull up Google earth to follow our escapades and see the lay of the land.

We will give guided tours now and then – tonight, January 30th, and February 2nd are already scheduled.
Just let me know you are coming and I will give you details.