Out on solo Crow patrol just before sunset time. First stop was along the south side of Merrimack River, along the shore line, on the east side of the Rt. 495 Bridge. Initially, Crows seen in small numbers going by in flight. At 4:18PM, observed massive numbers and waves of incoming Crows from downriver. One look in the distance, and it was like this magical swarm appeared out of nowhere and was moving upriver. They likely had been staging around the extended airport area, and then made the move towards the roost area.  It never fails to excite all the senses and convey an overwhelming feeling of total awe….every time! 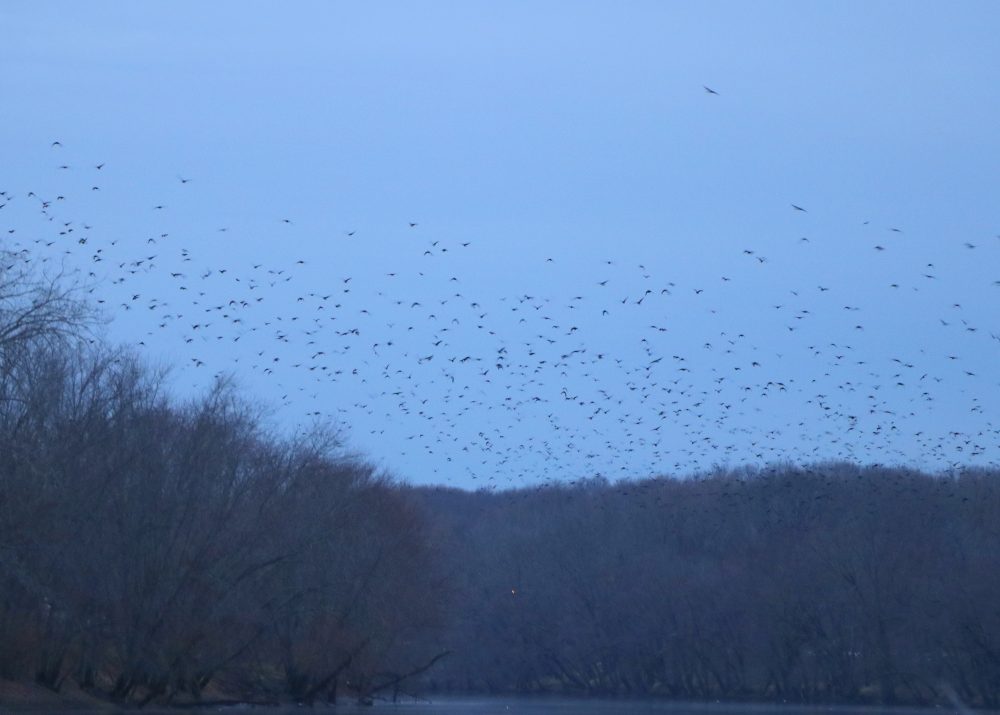 The waves continued for 20 minutes, with loud vocalizations, the numbers were huge, and then most of the Crows settled down at the roost. As they moved towards the roost, large groupings settled in trees on the north side of the river, from the baseball field up to the overnight roost area. Some stay and some move on. The vocalizations are loud and raucous, and there is lots of swirling, and at time playful flight acrobatics.  There are lots of similarities, but no two nights are ever the same. 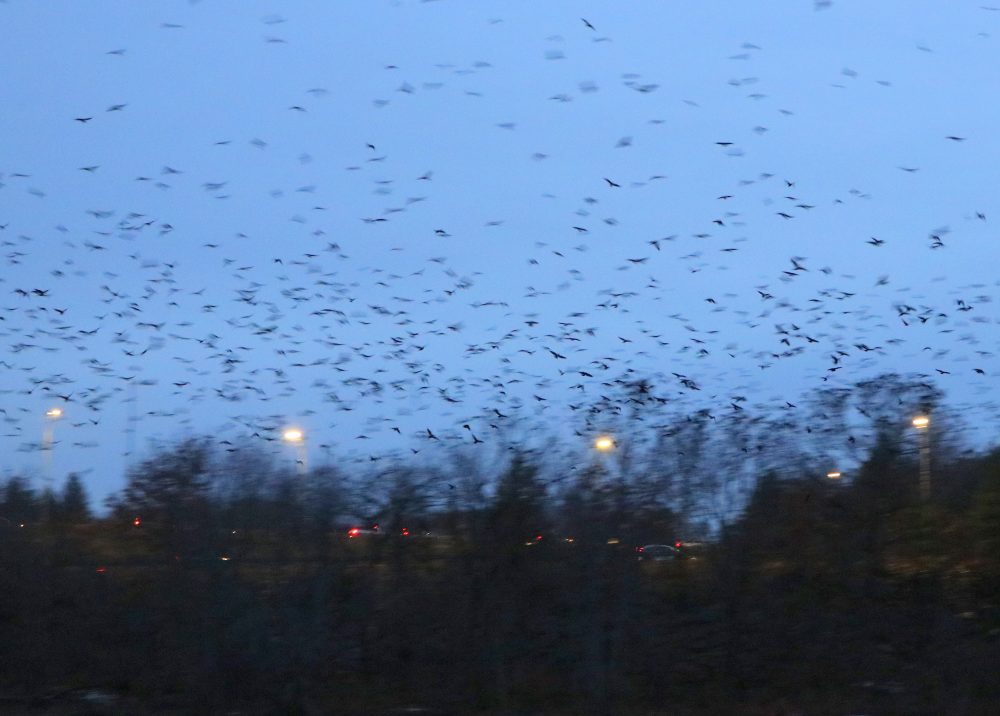 This photo above shows the Crows swarming in flight as they move upriver close to the roost. It shows as a bit of a blur which comes from dark moving birds, in flight, under diminishing light, with trees in background and moving vehicles seen through the trees. They tend to stay close together in flight as they approach landing into the roost. 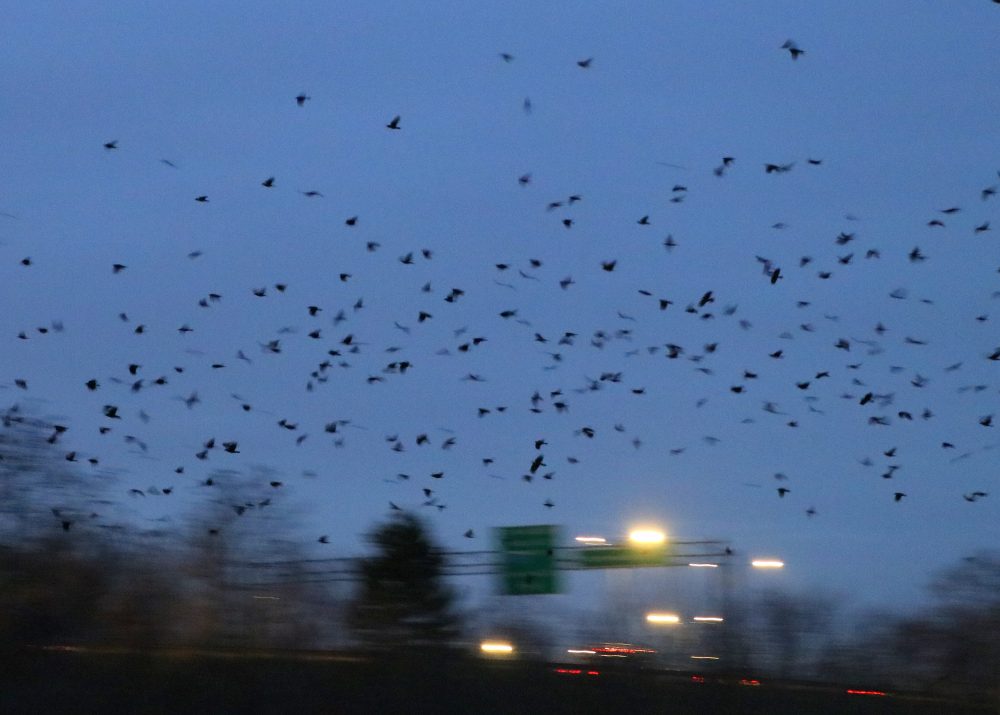 One more view of Crows going by and into the roost.  This image was taken at 4:30PM, about 20 minutes after time of sunset. The lights and signs are part of the Rt. 495 Marston St. off ramp.  The Crows initially gathered in trees on both sides of the off ramp. 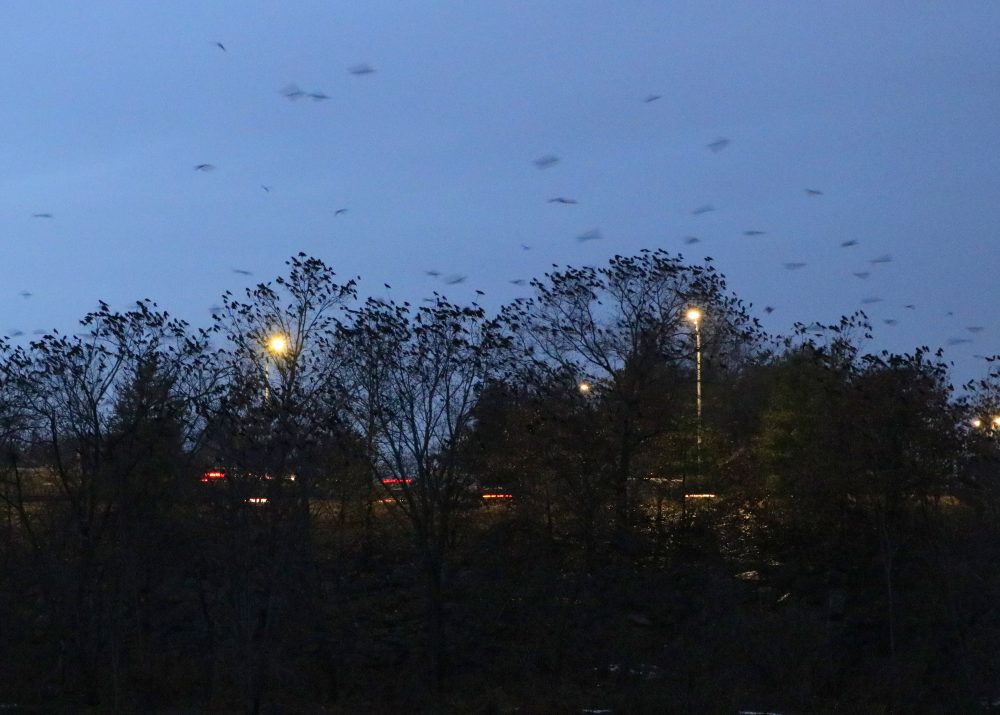 This image was taken at 4:32PM and shows the Crows largely settled into the trees along the north side of the Merrimack River. This will be the overnight roost location, and most likely, the Crows that are spread out a bit will move into a tighter formation shortly.  A bit later, drove around the north side, and observed the Crows in other trees around the Rt. 495 off ramp. It is a challenging location with fast moving traffic going by and nowhere to pull over!