Out on solo Crow Patrol tonight for short visit 15 minute visit before heading into Boston. The first stop was at Riverfront State Park; observed Crows in very early process of staging in trees along north side of Merrimack River, west of Boys and Girls Club; 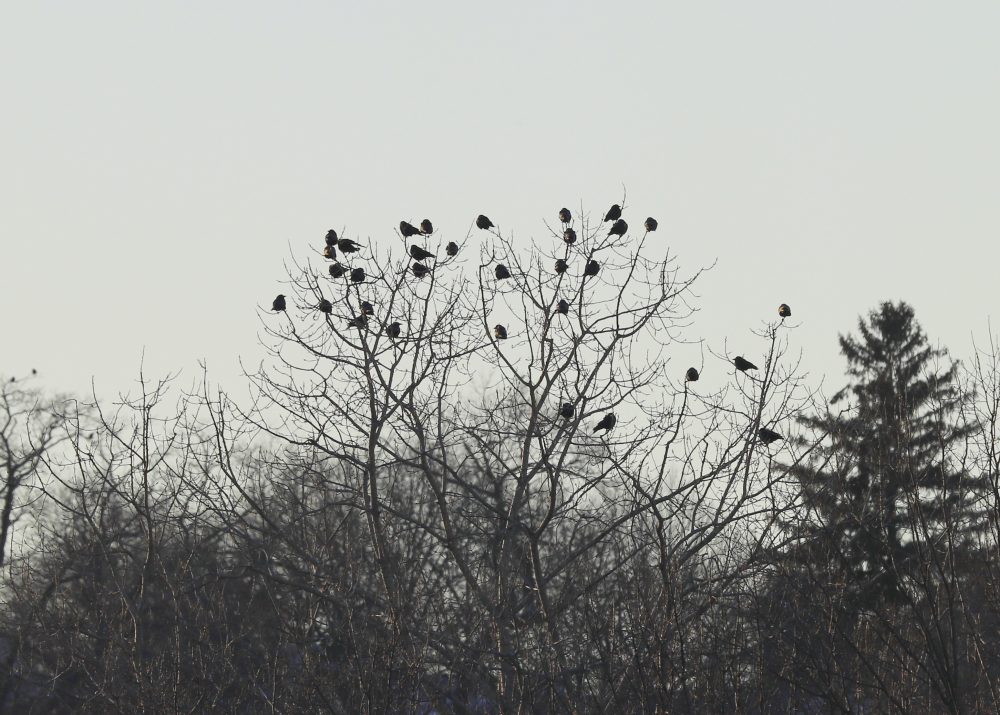 The next stop was at the Bashara Boathouse with light Crow activity. Next, headed to nearby Industrial/International Way/Bulfinch Drive area just to the west and located lots of Crows staging in trees, on the ground, and on rooftops around Simpsons and Affinity Group buildings. 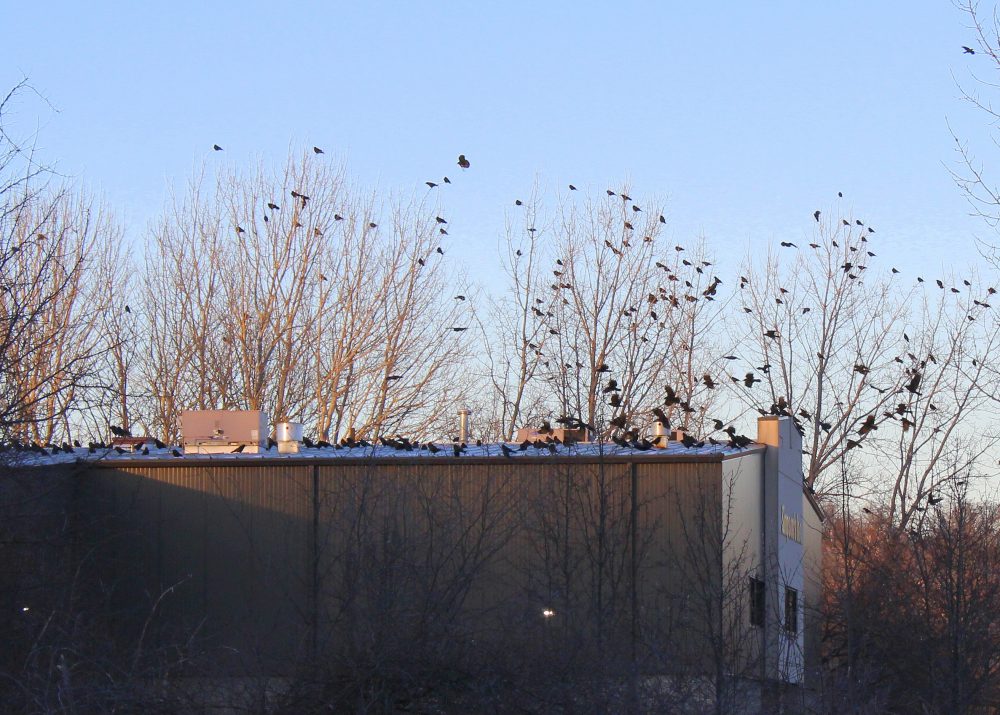 With crows all around, there were lots of crazy and varied vocalizations, along with sudden burst movements of flight and a rapid return to perch activities as numbers started to build.  Moved position to get a better look at the Crows along the west side of the Affinity rooftop. 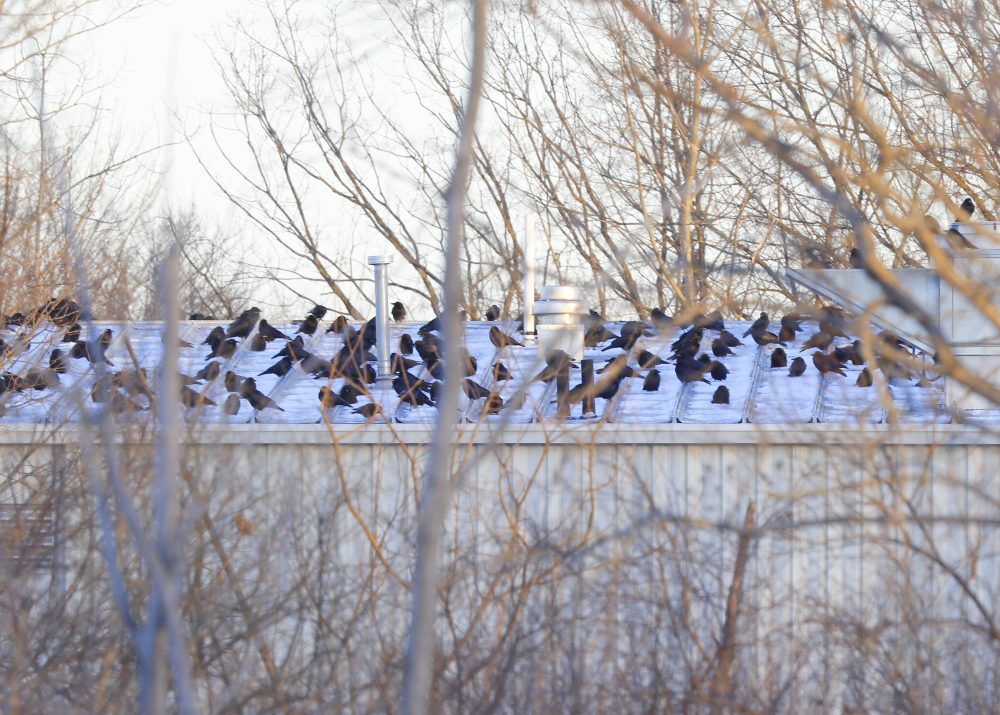 Finally, moved in close to the front of the Affinity building and observed a number of the Crows rise up and take flight.  Some circled back and landed on the roof, others on nearby trees, and others onto the ground in the parking lot.  So how do these staging or pre-roosting area work?  According to Wayne Petersen, in the Mass Audubon “Distraction Displays” blog, “the behavior of crows near these evening roosts is particularly curious, if not mercurial. For instance, from night to night crows approaching a roost will regularly make several pre-roosting stops (called staging areas), sometimes more than a mile from the final roost site. These short stops are generally accompanied by much raucous vocalizing, before the birds present often suddenly depart and head off to another staging site where this behavior is then repeated. This may occur several times before dark within a several mile diameter area of the final roost, and the staging areas may change location from day to day.” 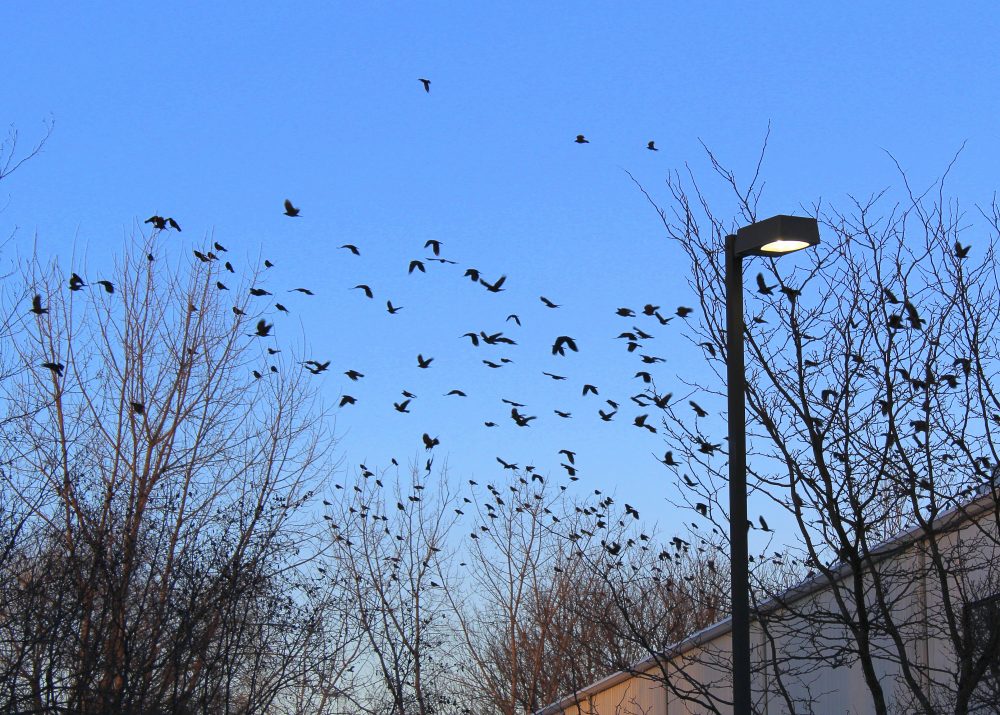 According to research (Moore & Switzer, 1998), these pre-roosting aggregations (PRA), begin forming on the ground in the early afternoon.These congregations were clumped both among available fields and within fields. Among fields, the same fields weregenerally used day after day, with nearby, similar fields (e.g., bare tomato fields, open grassland) rarely being used. While most PRA sites were used during the entire roosting season (e.g., Sutter Davis East), some were used for only part of the roosting season, and a few were used sporadically throughout the season. Crows begin aggregating in the early afternoon, forming larger groups as they move toward the city, and their roosting areas; the last major PRAs are in locations adjacent to the city. Around sunset, crows begin leaving the PRAs, heading for the roosting site in groups.