Sunset time at 5:05PM under dark overcast skies, with mist and light rain; winds from NE at 8MPH, temp at 38F.

Headed out on Crow Patrol just a few minutes after sunset; after connecting with Dana and Bob and their full update from Riverfront Park on south side of Merrimack River. Made my way over to the back of the Boys and Girls Club on Jordan St. on the north side of the river, across from Riverfront Park; this vantage point, on north side of the river, provided almost 180 degree view up and down river and to opposite shore and trees; initial observations showed large numbers of Crows entering roost trees between Wall Experiment Station and Riverfront Park, on south side of river; this area is about 230 yards long, or not quite the length of 2.5 football fields; cover photo above, shows the wide angle view. In addition, a large grouping of Crows was seen, about 250 yards away to SSW, on the ice much closer to south shoreline; 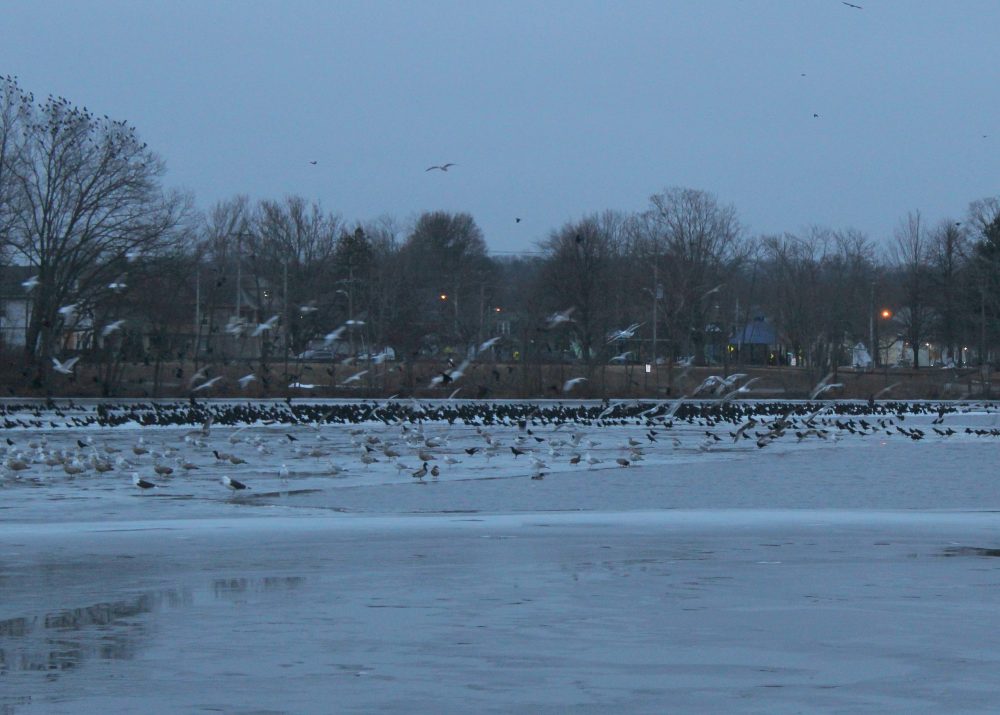 Here is a close up view of the dense pack of Crows on the ice about 10 minutes after sunset time; they often take their sweet slow time to lift off and proceed to the final roost!  Riverfront Park is in the background; Dana and Bob were viewing from this location, having started out much earlier. 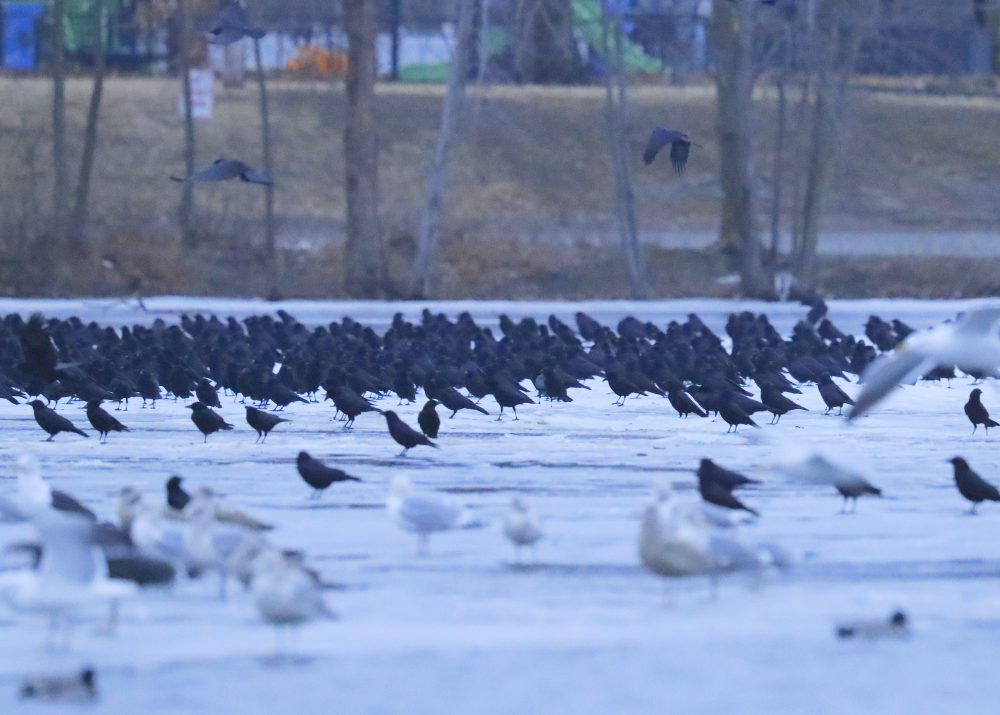 Another large grouping to SW, upriver on ice about 725 yards distance, closer to Bashara Boathuse, seen through the thick tree branches, and third small grouping to ENE, about 250 yards away closer to the Dam; 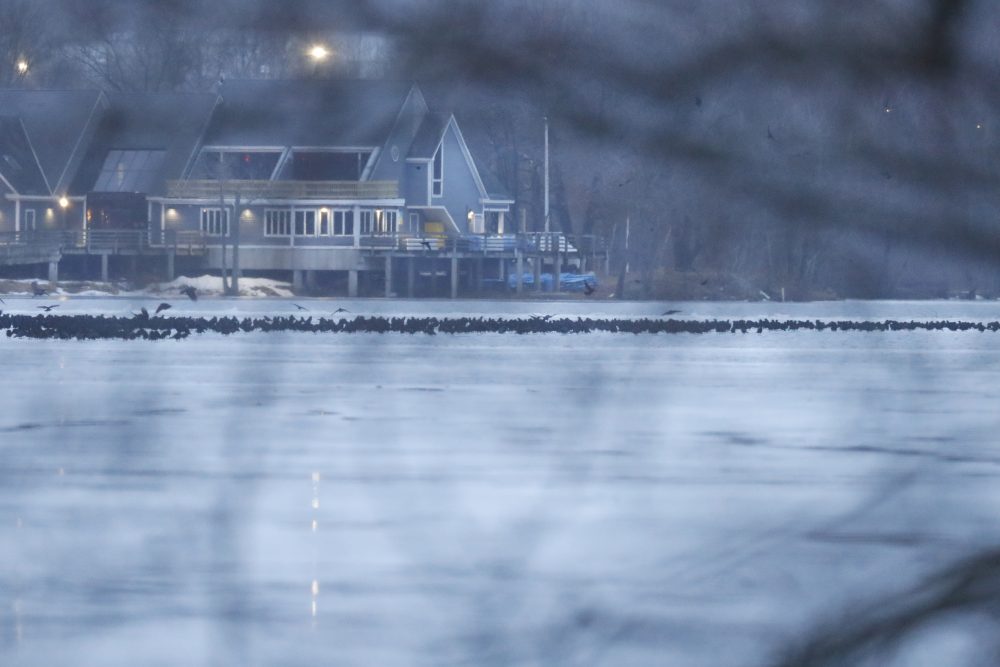 There were also a large number of Crows staging in trees all along north shoreline from Jordan St. up to Doyle St. with total distance of these staging Crows extending over 4/10 of mile to the west; made a careful check with no staging Crows observed farther upriver, to the west, than Doyle St.; the Crows have been seen in large numbers in the trees on the north side of the river on Jan. 26, 28, 29 and Feb. 5 as well. The Crows were vocalizing loudly with all kinds of wild calls; the trees along the south side became very densely packed with Crows entering final roost; 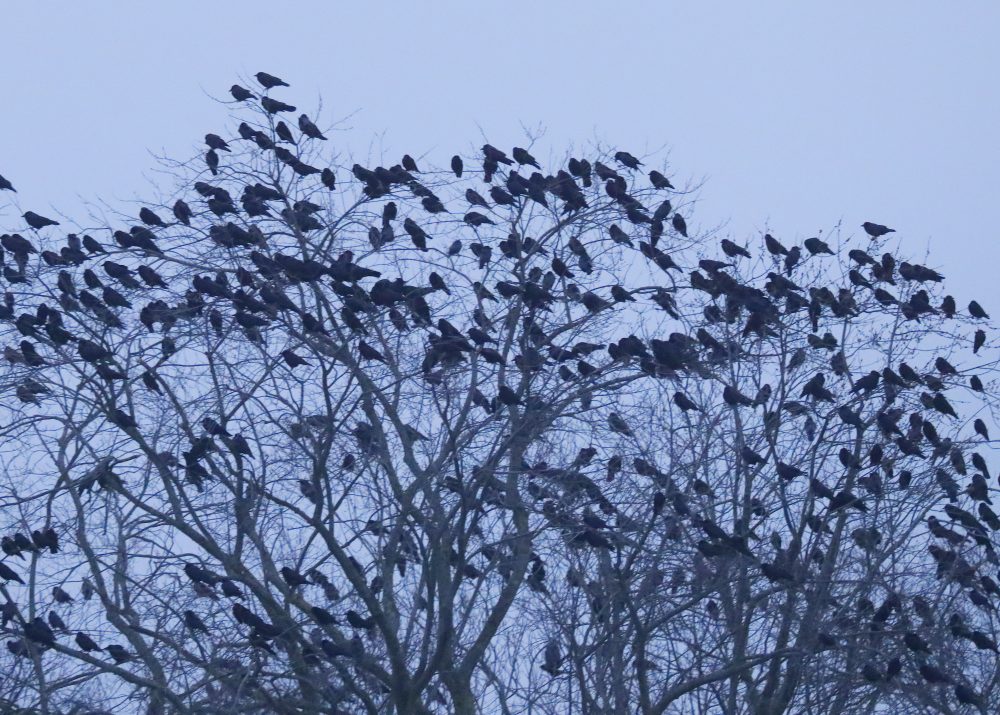 At 5:25, about 20 minutes after sunset time, more Crows were seen flying in from the west, and approaching the roost trees;  the light was diminishing quite a bit, making it quite a challenge to capture good images; but there were many Crows still arriving!  The lights had come on in Riverfront Park, in the background, and many Crows remained on the ice along, in a dense pack, with large numbers of Gulls. 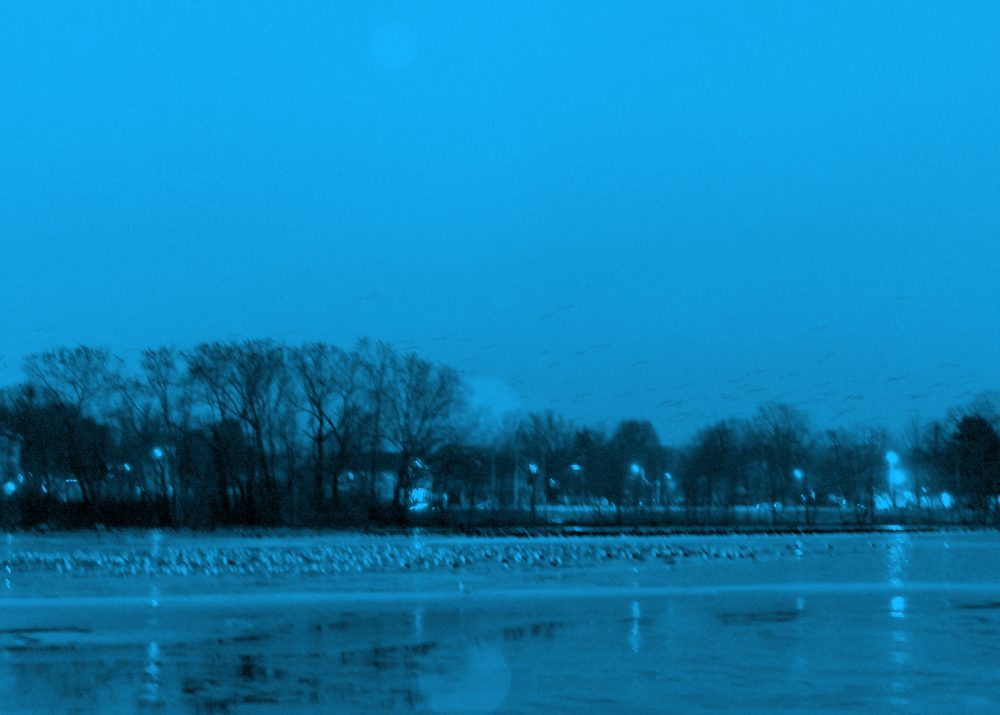 Then after driving around to Riverfront Park, observed a small number of Crows still on the ice, about 150 yards to NE with city lights in background; this was just before 6PM, about 50 minutes after sunset time, with more Crows still entering the roost, but the noise level had dropped off quite a bit!  Also walked from the very east end of Riverfront Park towards the Wall Experiment Station and back and observed endless numbers of Crows in trees on both sides of Rowe Street. This image shows the low light view out over the ice, just before 6PM, and almost an hour after sunset time. 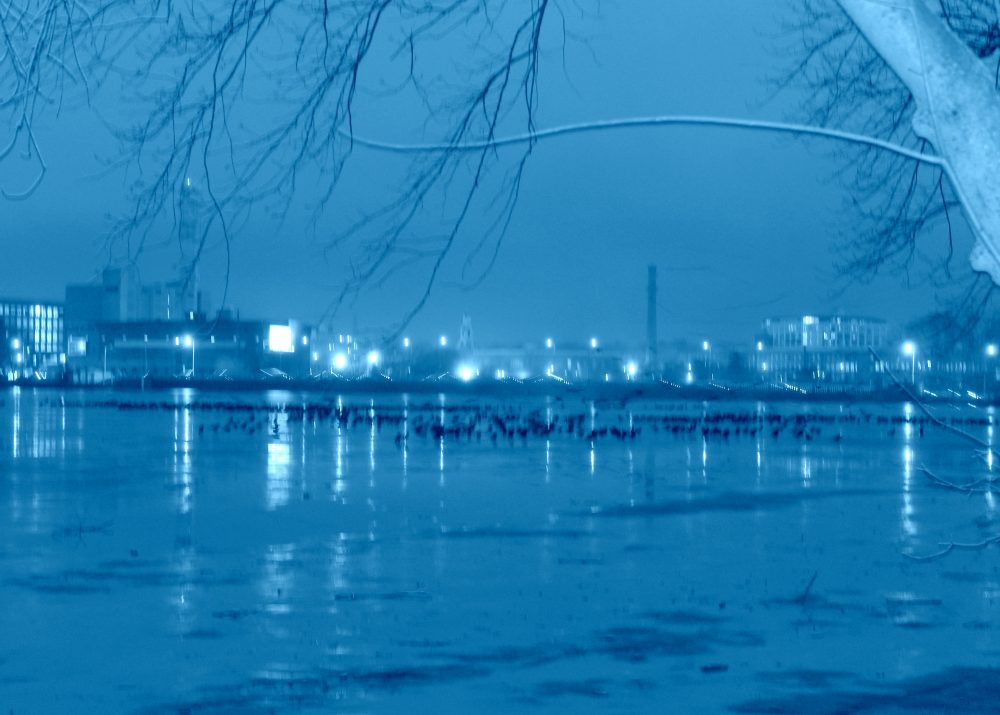 This final image, thanks to Google maps, provides an overview of mentioned locations, with primary viewing area, staging locations on the ice, and final roost location; hope it might be helpful! 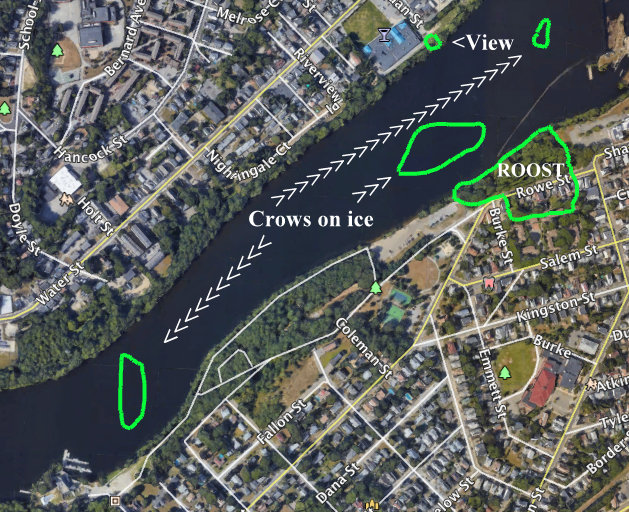