I tried to gather the whole sequence of events during the staging and roosting of the crow last night as we hope to contribute to the gathering of citizen science information about this phenomenon.

Last night there was a definite pattern to the staging.

We gathered at the Bashara Boathouse at 1 Easton St.at 4 PM and were joined by a great group pf 8 folks from Framingham and Ashburnham. 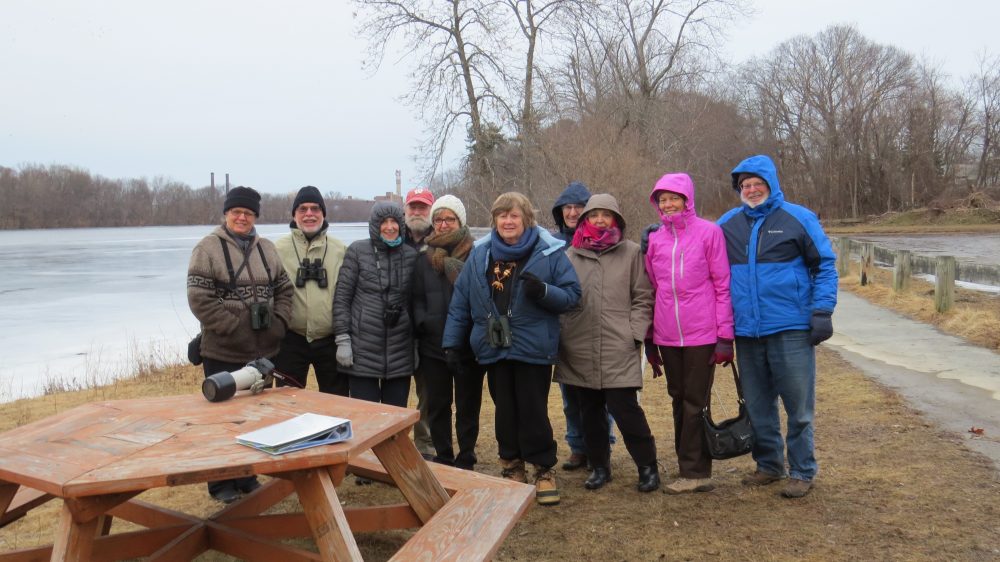 At the Bashara Boathouse, we first noted two Bald Eagles on the ice – a juvenile and an adult. It was amusing to watch as a few crows would drop down beside them (oh, the looked so small), cawing and jumping around. The eagles paid no attention. Also, there were four common Mergansers across from us in the open water on the far side. 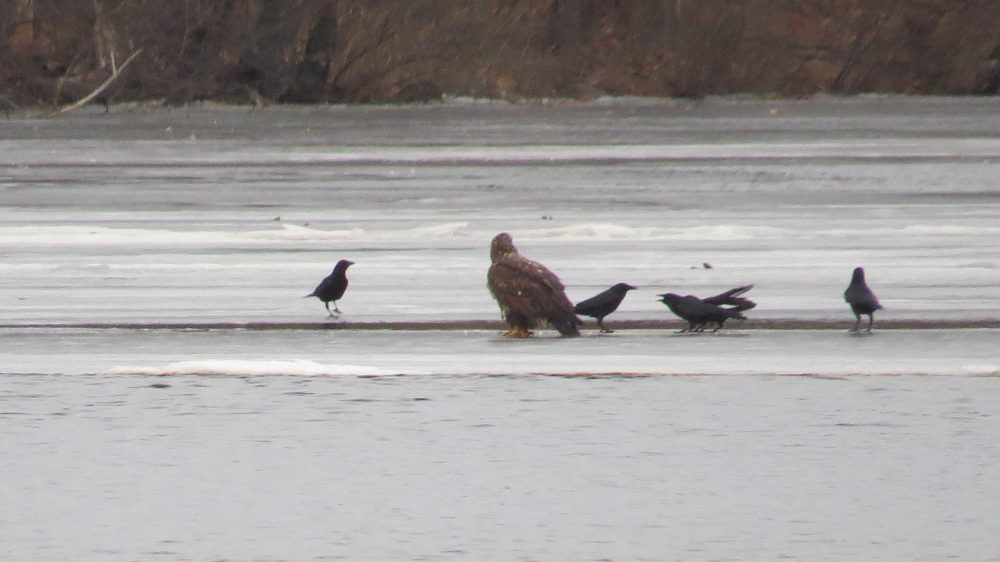 As for the crows, we could see a large group far off to the left (west) ON THE ICE stretching across the river. At about 4:30 a large group came in from the north just to the west of the dam and went east to join that group. As it got closer to sunset, thousands of crows lifted out of the trees not visible to us to the north of the ones on the ice and started streaming over the north side of the river towards the dam on the south side of the river. 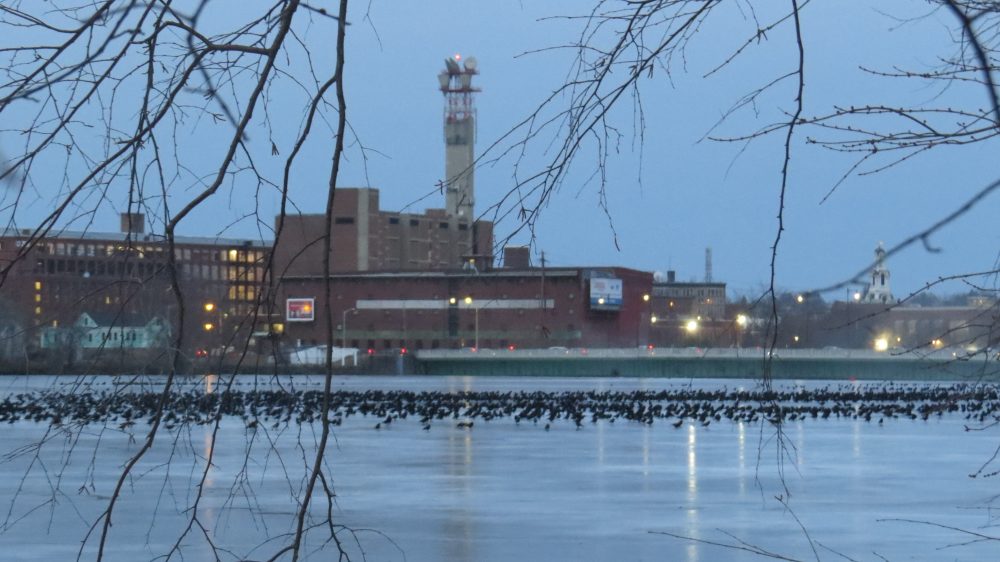 Then another large swirling mass lifted from the trees on the south side of the river to the south of the crows on the ice and made their way down river like the ones from the north side. Only a small number of these birds were visible from the boathouse.

Now the third group – those on the ice – lingered the longest but finally some started to move east.

SO THERE WERE FOUR PODS OF CROWS ALL ACTING INDEPENDENTLY during the staging phase. This was the first time we have noted so many distinct groupings of the crows staging slightly differently. Who knows but it may reflect where they came in from that night?

At this point, as darkness set in, we all moved east to Riverside State Park off Everett St. to see where the crows were all going to roost. Thousands were to the east of us densely packed into the trees to the west of the Lawrence Experiment Station – a state water quality lab. Even some in the tall trees amongst the multistory housing units to the south of Shattuck St. Thousands were on the ice between us and the dam. At this point, Craig Gibson began to watch the crows from the north side of the dam and then out on the working area of the dam capturing pictures in the low light. Craig later joined us at the park for a short discussion of the night’s events. Craig created and maintains this blog with many helping hands. He posts his observations and photos to this blog and reports to Ebird, Essex County as well.

Based upon our return visit at 8 PM the previous night, we suspect those on the ice did move up eventually into the trees. 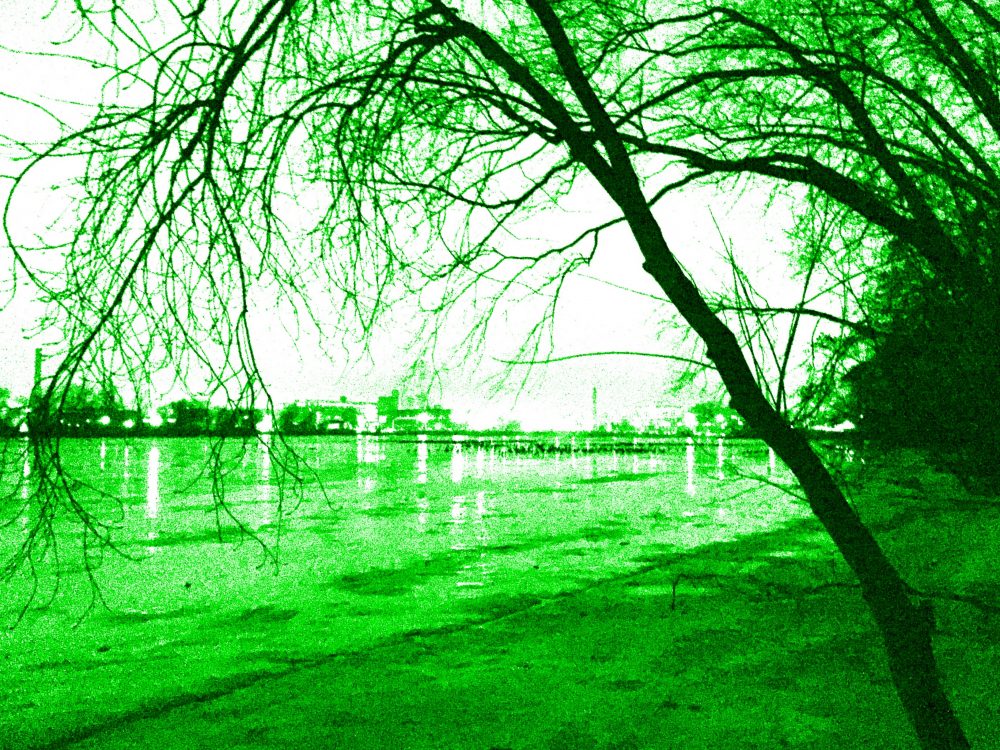 Another night of wonder and mystery.