Out on Crow Patrol with first stop at the baseball field located on Incinerator Road in Lawrence, by the Essex County Pre-Release Center. Over 500 Crows were seen assembling in the trees to the NE, on the east side of the Merrimack River, and then within a 3/4 mile radius more Crows were observed spreading out to other staging areas to the west, but from a distance. 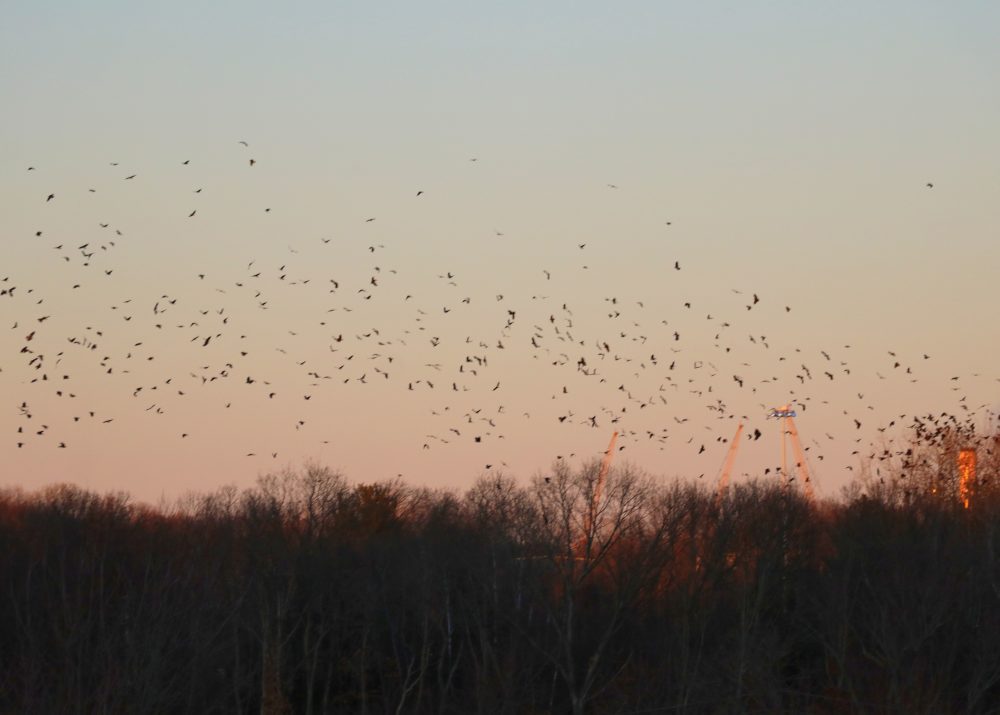 A few minutes after sunset, with flight action seen to the NNE, was able to search, and find, large numbers of Crows staging around the Parthum School area. As usual, the Crows, were milling around on the ground in the parking lot as well as spread out all over the baseball field with over 150 Crows in sight on the grounds. The school is located about 3/4 of a mile north of the Rt. 495 bridge roost area, and may signal a change in general staging patterns. 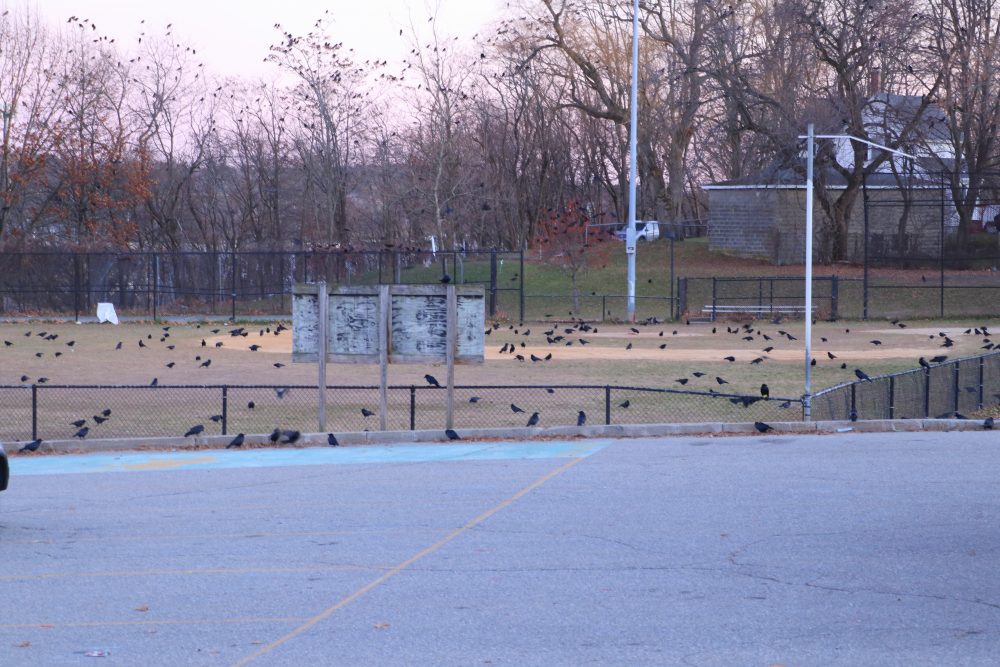 Right after that, moved to the south side of the river, and right on cue, the Crows came streaming in to the roost trees about 20 minutes after sunset time. This image shows the buzz of activity in the tree tops around the roost, the swirl of incoming arrivals, and the beautiful sunset sky colors in the background. The image below with well over 300 Crows in flight was captured about 27 minutes after sunset time 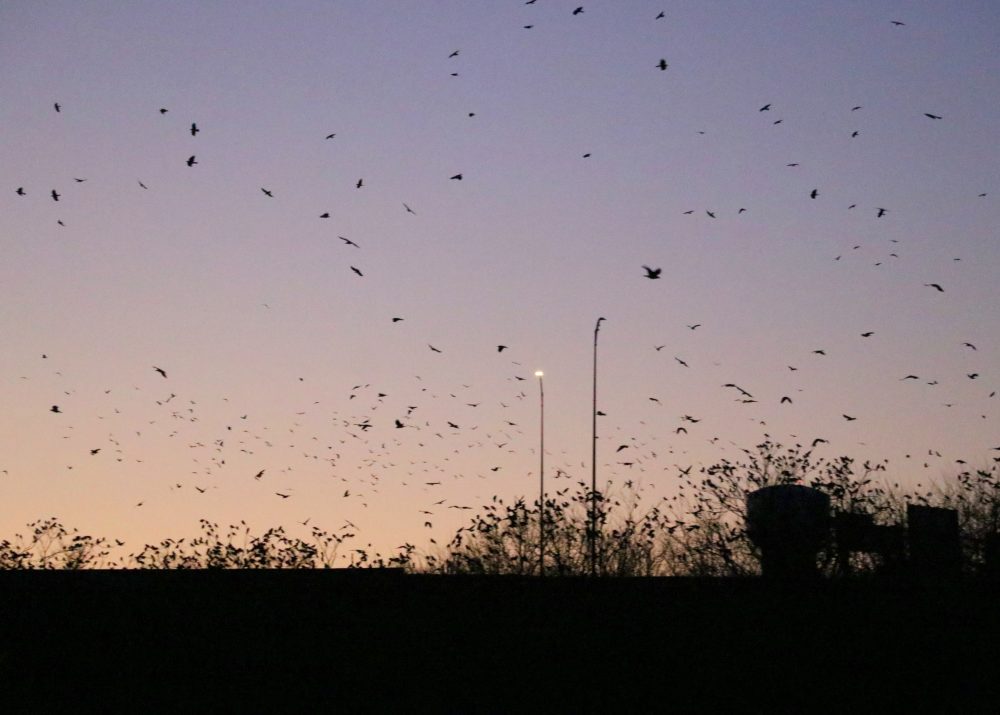 The flight streams were much lighter then usual from downriver, much heavier from the north, and at overall higher elevations. During the build-up around the roost, some of the incoming Crows detoured to an area with dense trees at the south end of the Rt. 495 bridge, and on the east side of the bridge. On many nights, this area is a favorite final staging area, and the numbers of Crows often builds up for a while. A bit later they make a group move, all at once, in coordinated flight, over the river, close to the bridge, and into the overnight roost. When the Crows lift up and off in flight, it seems like someone blew the start whistle, and the Crows all responded at once. It prompts the question, how do they know to launch, all together, in close flight formation, same speed, and to the roost? This image below captures one of these special moments, with almost 500 Crows in flight, and again, with stunning background sky colors, about 31 minutes after sunset time. 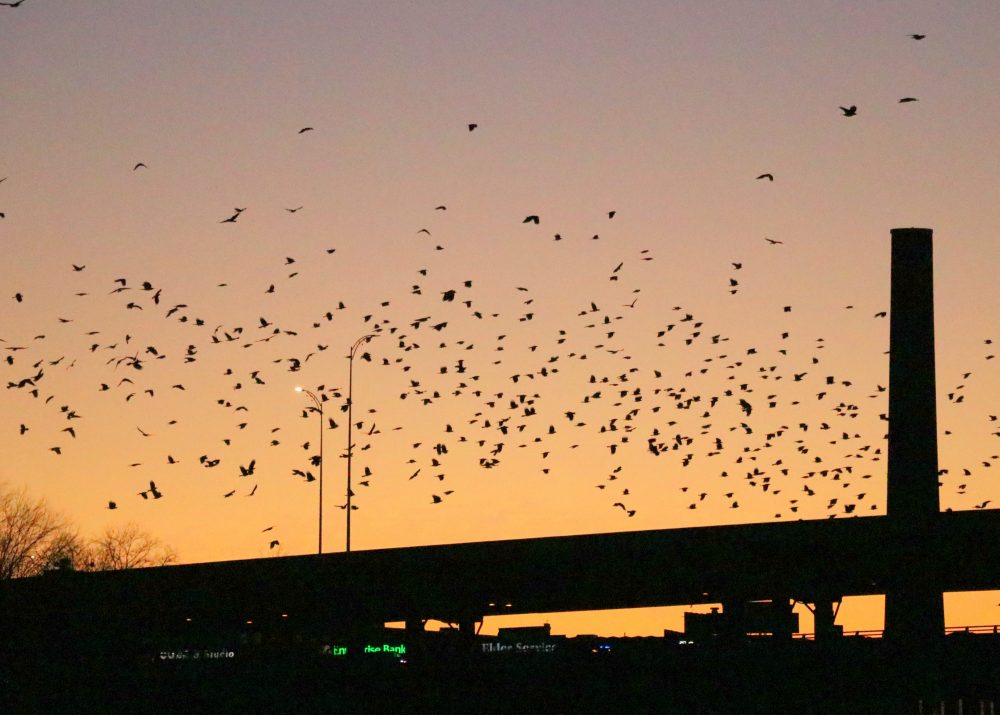 While departing the from Crow Patrol for the night, had an unexpected chance while in the passenger seat of the car, to see over a thousand Crows assembling in trees on the west edge of the southbound highway on-ramp. These Crows would have likely moved, as darkness settled in, from the west side of the Rt. 495 bridge to the general roost area on the east side of the bridge. Another dazzling night out with the Crows….smart, social, and family centered!