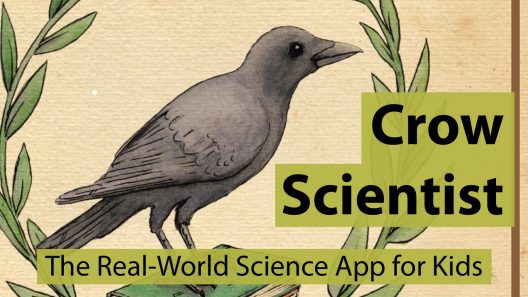 A new app developed by School of Environmental and Forest Sciences professor John Marzluff and his wife Colleen will allow kids to become corvid researchers.The free app, called Crow Scientist, coaches kids to pay attention to what the crows in their neighborhood are doing. They will witness how crows work together and learn the varying calls of the birds. As users reach new observations, they can earn certificates for their achievements.The app began as a Kickstarter campaign and was recently fully funded. The Marzluffs were interviewed about the app on KUOW. You can listen to the interview here.
Had a nice conversation with John on Monday night and he shared his excitement for this new app.  Here are some of the highlights:

Congratulations to John and Colleen for this amazing new app that will transform the way that a growing group of young people observe, document, and collect on birds out in the world, and use that data in school projects and on display for school science fairs!

For those with an interest, the photo below with John was taken while attending his workshop in 2018 at the North Cascades Institute in Washington State. The weekend was hosted by John. with great help from Kaeli Swift, to share their knowledge and work on Corvids, arguably the smartest of the bird families. Marzluff, who has been teaching for the Institute for almost ten years, has continually filled courses to the brim, and in 2018, his “In the Company of Corvids” adult weekend seminar attracted twenty participants, all excited to spend time in the field searching for ravens, crows, jays, magpies, and nutcrackers!