On Tuesday night, Jan. 11, 2022, the Merrimack River Watershed Council (MRWC) hosted an informative webinar, “The Crow Show 2022.”  The Merrimack River, at 117 miles in length, drains a watershed of 5,000 square miles that sustains a population of over 2.5 million people! The MRWC aims to improve and conserve the Merrimack River watershed for people and wildlife through advocacy, education, recreation, and science. MRWC was founded in 1976 with major water pollution issues, and today, many threats remain to the long-term future of this extraordinary water source and natural resource. 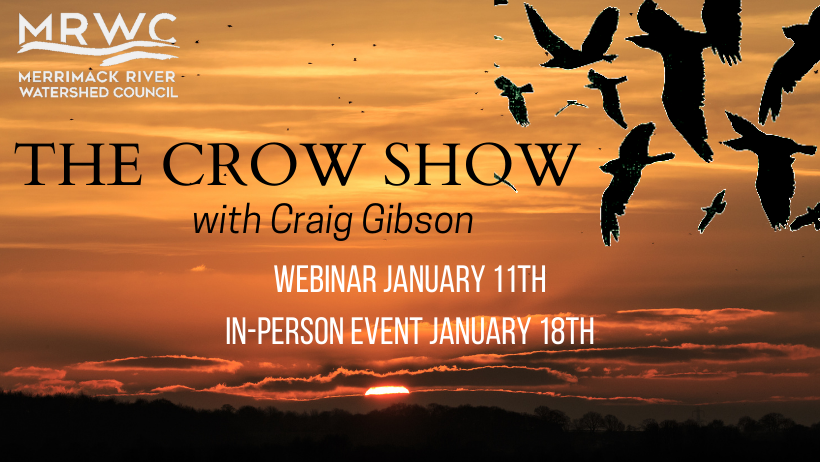 The MRWC has a great team in place with Julia Halm, coordinating all of the details prior to the webinar on Tuesday night. Julia is a new member of the staff and serves as the Community Engagement Coordinator. Julia comes to the MRWC after working as a nature educator at the Boston Nature Center. John Macone, the Policy and Education Specialist, has also been helping behind the scenes for these types of events as well. Matt Thorne serves as the Executive Director of the MRWC.  He joined the Council in early 2020, and he brings a wealth of experience in nonprofit management, environmental stewardship and environmental advocacy – the right fit for the present and future direction of the council.

The Crow Patrol has worked very well together over the past three years, with the MRWC hosting supporting and hosting a series of walks and talks about the Winter Crow Roost in Lawrence, MA. Once again, it was an honor to be invited to share a presentation on the fascinating Crows and the dynamics around the entire roosting phenomenon. In the Q&A session, a question popped up about the mating habits of Crows, and how long do adult pairs stay together? It is a fascinating question, and it prompted a bit of research after the talk. Here’s what those with expertise on Crow breeding patterns have to say:

Kevin McGowan: Crows mate for life….more of less! In general, it appears that they do. Unless a mate is killed or severely incapacitated, crows appear to stay with the same mate year after year

Kaeli Swift:  I’ll  describe them as “monogamish.”  More scientifically, we describe them as being socially monogamous but genetically “promiscuous”.  This means they generally stay with one partner for life, but behavioral observations and a genetic analyses in New York populations indicated that attempted extra-pair copulations are not uncommon, occurring in 36% of pairs, and resulting in 19% of hatchlings. Other populations are not reported to show much promiscuity, however.

Thomas Nuttall: They retire into forests in the breeding season, from March to May; the conjugal union, once formed, continues for life.

E.E. Good: Crows exhibit little of the conspicuous courtship activity so characteristic of many other birds; the paucity of courtship display among Crows has led to the speculation that perhaps Crows mate for life, as is believed to be the case with the Raven

Treehugger.com: Crows are not only social birds, but also more family-oriented than many people realize. They mate for life, meaning a mated pair will typically stay together for the rest of their lives, but their family lives may also be a little more complicated than that suggests. Crows are “monogamish.” This means they generally stay with one partner for life, but genetic analyses show that male crows only father about 80% of their family’s offspring.

Animalhype.com: As far as the studies conducted on their species are concerned, crows do mate for life. These birds are intelligent and social and surprisingly family-oriented and like to care for their younger ones, at least before they reach their sexual maturity. This is why you can find many American crows living in small families of 6-9 crows, including the parents, for years. Once the crows have mated, they remain loyal to their partners year after year until one of them either has died or lost the ability to mate. While the older crow couples usually stick together for life, break-ups do happen among the young, immature crows when they are unable to reproduce together. Unlike most of the other male birds that abandon the females right after mating, the male crows stick to the females and help them throughout the incubation (in building the nest and keeping it warm), and raise their babies together when they hatch from the eggs.

Current Biology: Like most birds, corvids are monogamous, mated pair, pair bond for life, pair remains together throughout the year.

OpticsMag.com: Along with being friendly with their flock, crows are primarily monogamous and mate for life.Unlike other bird species, after courting and successfully mating, crows will build a nest together, incubate the eggs, and take care of their young as a team. The following year, they’ll repeat the process all over again until one of the pair dies or is no longer able to breed. It’s not just the mated pair that take care of each other, though; offspring from the previous year’s mating season will also take care of their parents. They’ll feed the female crow as she incubates her eggs and will also help protect their newly hatched siblings.

MentalFloss.com: American Crows spend most of the year living in pairs (they usually mate for life) or small family groups.

HumaneSociety.org: Crows tend to mate for life. Offspring may spend up to six years with their parents, helping to care for subsequent nestlings.