Thursday night was the most spectacular night of all watching the Lawrence MA Winter Crow roost hands up. We went out there an hour before sunset 3:11 pm with Nancy Soulette and Gwyn Loud of Lincoln and were joined there by David Lipsky of Concord, NH. Bob was prepared to count them and I was going to lead our guests to the best viewing spot – the top of the parking garage so I thought. Sunday, Monday and Tuesday nights that had been the spot of choice to see the show. 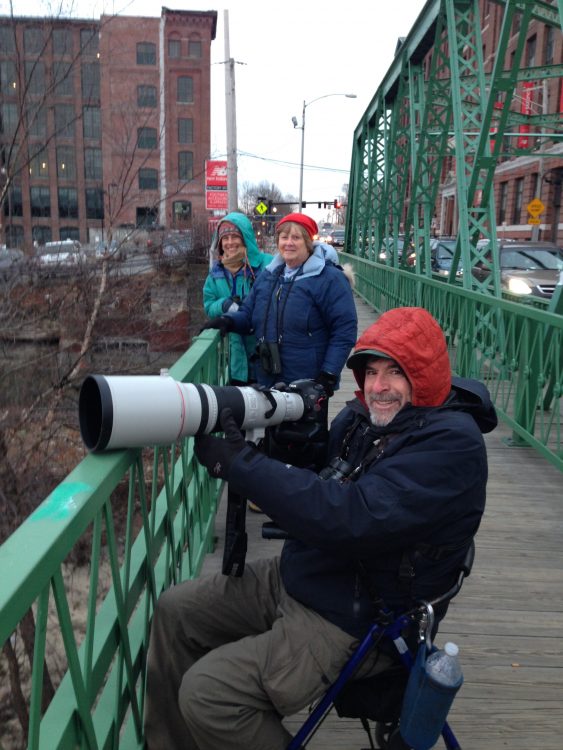 But Thursday night and last night the show venue had moved. As we stood at the beginning of the lot, (the top of the lot since it drops down as soon as you enter the parking lot) and looked down the river, crows were starting to arrive from the west along the river, from the southwest over New Balance and some from the southeast. They mainly began to congregate along the river in the tall trees in front of the Ferrous Hill – downstream beyond the first large mill building to the east of the Duck Bridge. A new staging area. Bob stayed in the parking lot counting and we all went out onto the bridge looking east. As it got closer to sunset, the river of birds began to stream in from the east, wave upon wave of hundreds of birds. Then waves of birds from the west. The trees were filled with black bobbles. They were so noisy. 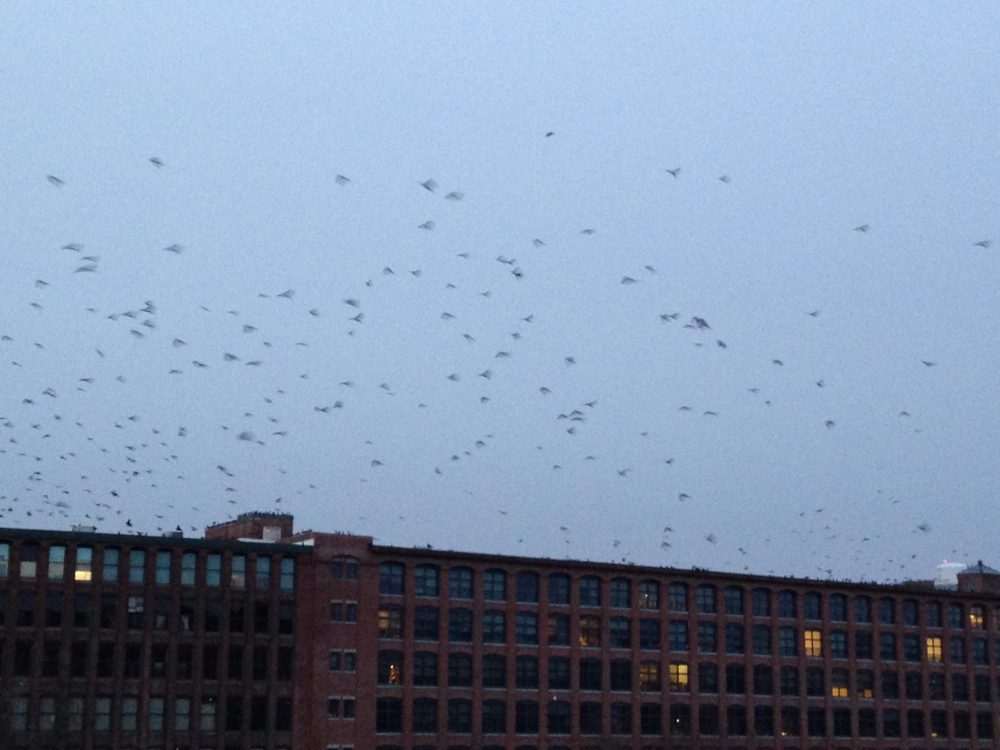 What a wonderful viewing spot that night. You need binoculars and you need to keep scanning the sky to the east over the airport. The light began to fade. Suddenly, a helicopter (that had just left the hospital on the hill above the crows noisily flew out towards the tree tops where the crows were. Thousands of crows rose up peppering the sky- their caws were so loud. Some circled and flew to the roost on the western side of the bridge – right up over us. Some settled back into the trees. From that point we kept turning and watching them settle into the thin line of leafless trees along the river to the west and then looking back at what became an endless stream of birds flying towards us and then over us and the bridge into the roost. I have never seen so many birds. We were breathless with excitement and awe.

We all they went over to the other side of the bridge and watched the crows in the roost from there. They were partially lit by the lights of the New Balance factory and looked like a leafless Christmas tree adorned with thousands of black bobbles.

As they say, “you should have been there with us”. None of us will ever forget the spectacle I believe. By the way, when Bob got home, he added up his numbers and thought there were 25,00+ birds – yes, 25,000! We all felt there were more.

Last night Bob, Craig Gibson and I were fortunate to be taken to the fourth floor of the New Balance Building to watch the show by a specially arranged security person. We found there was no viewing spot to the west, a good viewing spot to the south of the roofs of the buildings across Merrimack St. and if you looked down from the windows on the north side, you could just see the crows settling into the roost. Again, last night the crows had staged where they had the night before and we were able to watch them well first coming by us from the west over the river going towards the staging area and then all of them in the darkened sky coming towards us and going into the roost below.

These birds continue to carry on their nightly ritual. They will never it seems fail to excite me. The spectacle is there for you to watch too.