Arrived at Duck Bridge about half hour before sunrise to observe overnight roost breaking up after first light and dispersal for day ahead.  The photo above is from the Duck Bridge looking east over the Merrimack River with spectacular morning colors! Intense vocalizing by Crows as they departed in all directions. Sunrise was at 6:27AM under clear skies, wind at SW 6MPH, and temp at 42F.  The photo below shows what the east end of the roost looks like nearest the Duck Bridge, with crows taking off in all directions! 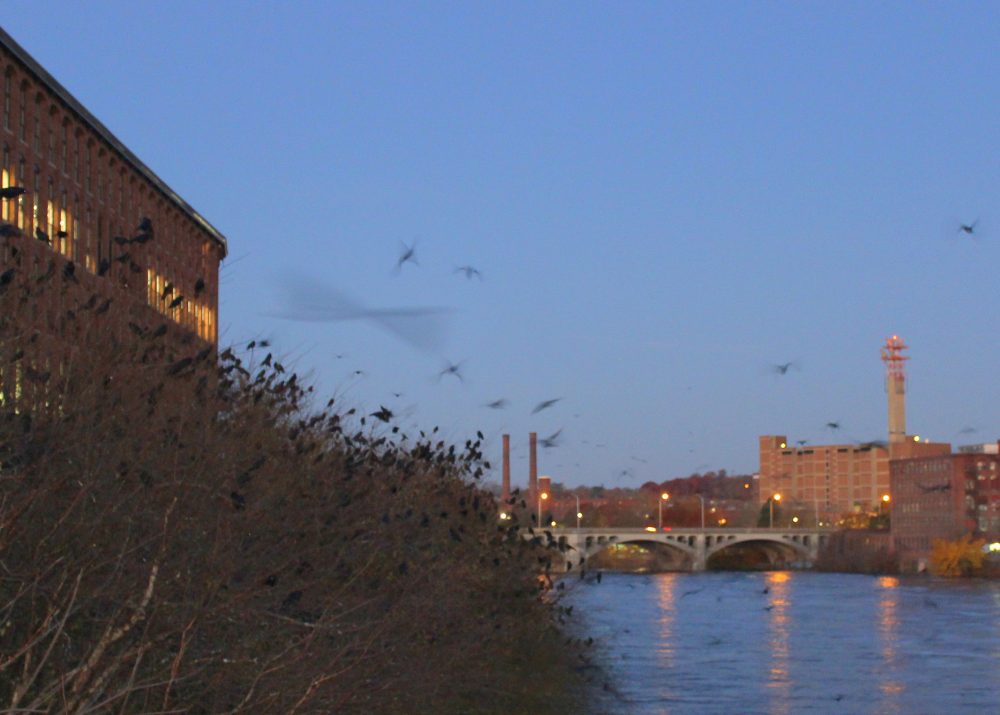 Here is an excerpt from a timeless article on winter crow roosts written in 1888 by C. L. Edwards. It is a fascinating account over two winter of a communal winter roost seven miles outside of Baltimore, MD.  Edwards describes the life of the roost during a typical 24 hour period.  See the link on our research page!

But just an hour before sunrise, when the east was becoming faintly lighted, the crows suddenly commmenced awakening, and at the same time cawing. The few who led the measure were within one or two minutes joined by the full chorus of 300,000 or more voices, each apparently striving to be heard by all the rest. Never before had I realized the almost infinite possibility of the crow’s variable caw in the production of discords. This great noise, which poetic soul of Audubon conceived to be “thanksgiving ” and ” consultation,” was kept up for twenty minutes before any movement was discernible. Then about a dozen crows started off for the day’s work, followed by more and more, until they were going from the roost much as they return to it in the evening, in the three or more large streams. The crows, however, were much more scattered in the order of flying than in the evening streams. After they had been leaving thus for about twenty minutes, the streams constantly growing larger, a common impulse seemed to move a large number of crows, and they did not wait to “fall in” as individuals, but suddenly joined the stream as a large flock. The streams were thus swollen in bulk quite regularly about every five minutes until the colony had dispersed. In an hour’s time, or just at sunrise, the whole body, with the exception of twenty or thirty, evidently too weak to go far off, had left the roost. 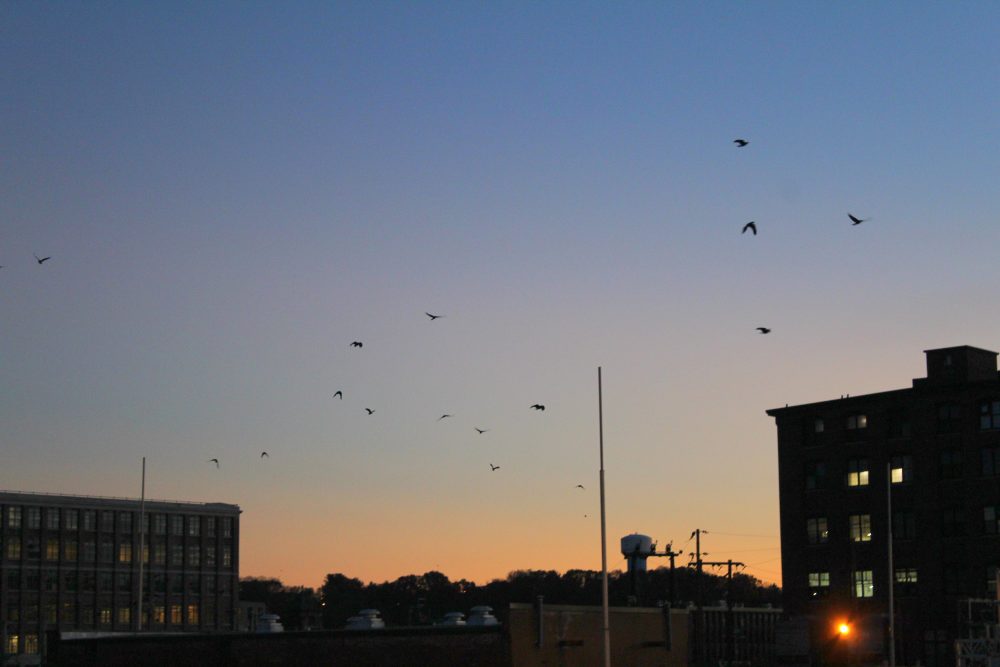 Consistent with these observations made and documented by Edwards, the Crows start the waking up process about an hour prior to sunrise.  Then around first light, as the skies lighten, the Crows make all kinds of noise and begin to lift off.  All but a few crows are left in the roost by actual sunlight.  The photo above is looking NE from South Canal Street with outbound Crows, and the City of Lawrence water tower, to the right of the tall pole, in the distant background, about 3/4 miles away.