This video was taken 30 minutes after sunset time as the beautiful dusk colors were diminishing before the darkness of night time. As the Crows surge towards the roost, it is always exciting to watch and hear the action!

Out on solo Crow Patrol with first stop at Lawrence Municipal Airport with thousands of Crows all over and further in the distance to the NW. This has been a very regular staging area for the Crows, and no surprise to find them here tonight. The airport covers 420 acres and has two paved runways. 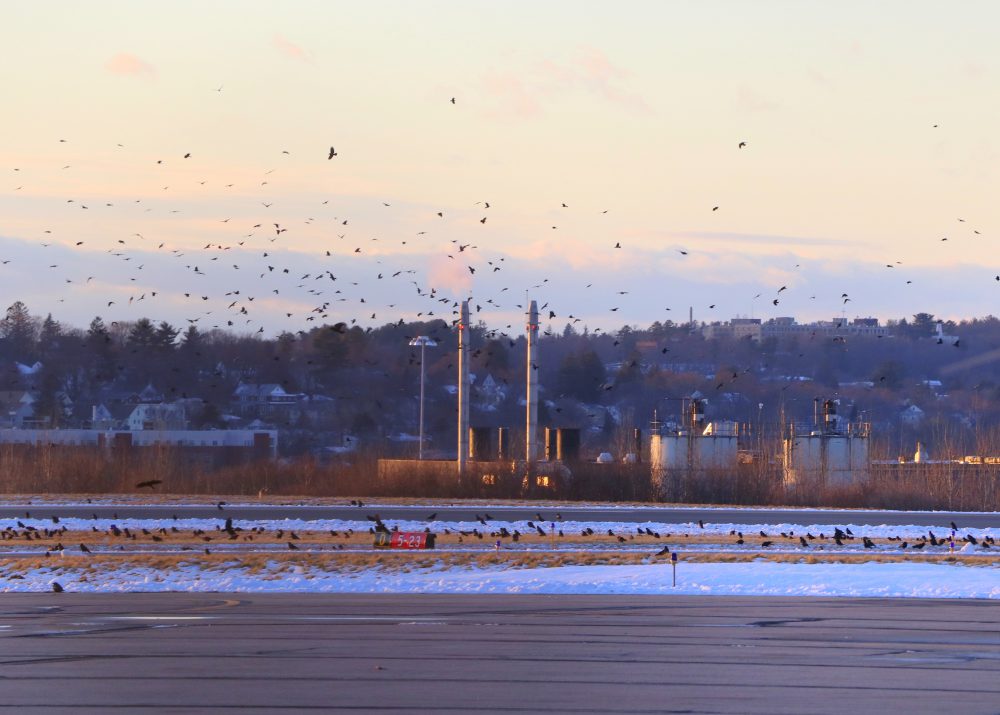 Next stop along Charles St., just below the airport, and in a direct line for the Crows on their way to the roost. The Crows dropped into this area, from the extended area around the airport, in huge numbers, and perched in the surrounding tree tops minutes before sunset time. The vocalizations were intense and the Crows were clearly on the move towards the overnight roost. 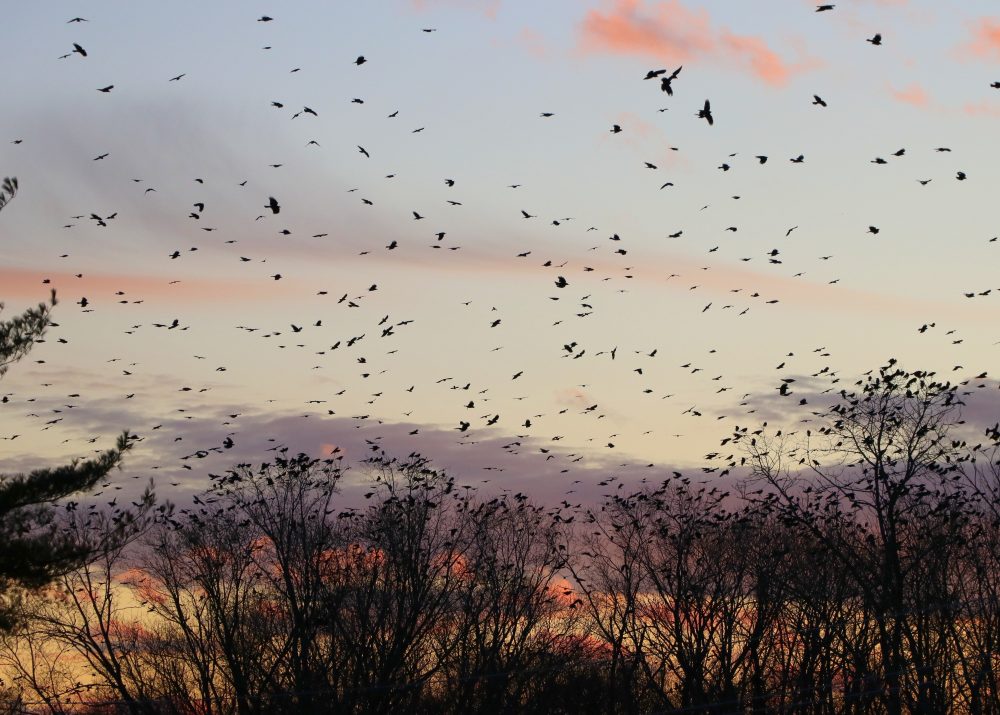 The final staging areas were largely in the trees on the south side of the Merrimack River from the pump house, to at least 3/10 of a mile downriver.  The Crows tend to assemble in growing numbers on the south side of the river. Then a number of smaller groups, in the thousands, break away and fly across the river, and into the trees by the ball field on Incinerator Road.  This is of a leap frog process as they make their way into the final roost location. The image below shows the Crows breaking from the south side and moving out in flight over the Merrimack River about 22 minutes after sunset time. 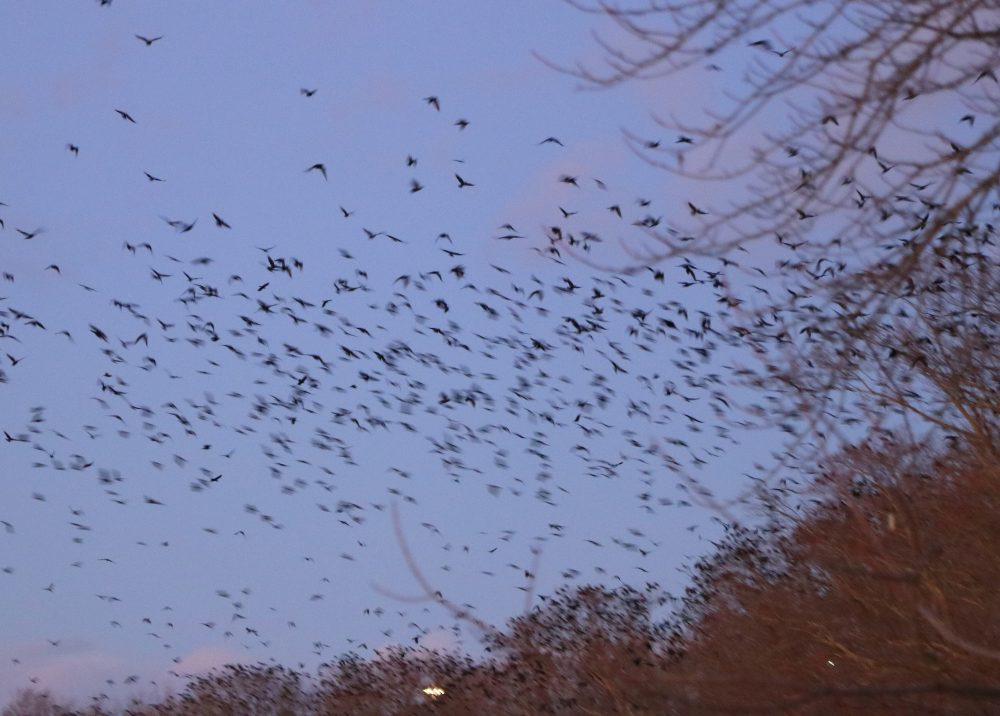 These waves of crows launching and moving in flight continues for well over the next 30 minutes.  Some move in a direct line of flight for the roost, some move over the river to the next interim perch stop, and others move to the north side of the river and follow along the trees, and then into the roost. This image below shows the Crows in flight at varying elevations at 30 minutes after sunset time.  The CITY OF LAWRENCE water tower is just visible through the leafless trees and in the diminishing light. 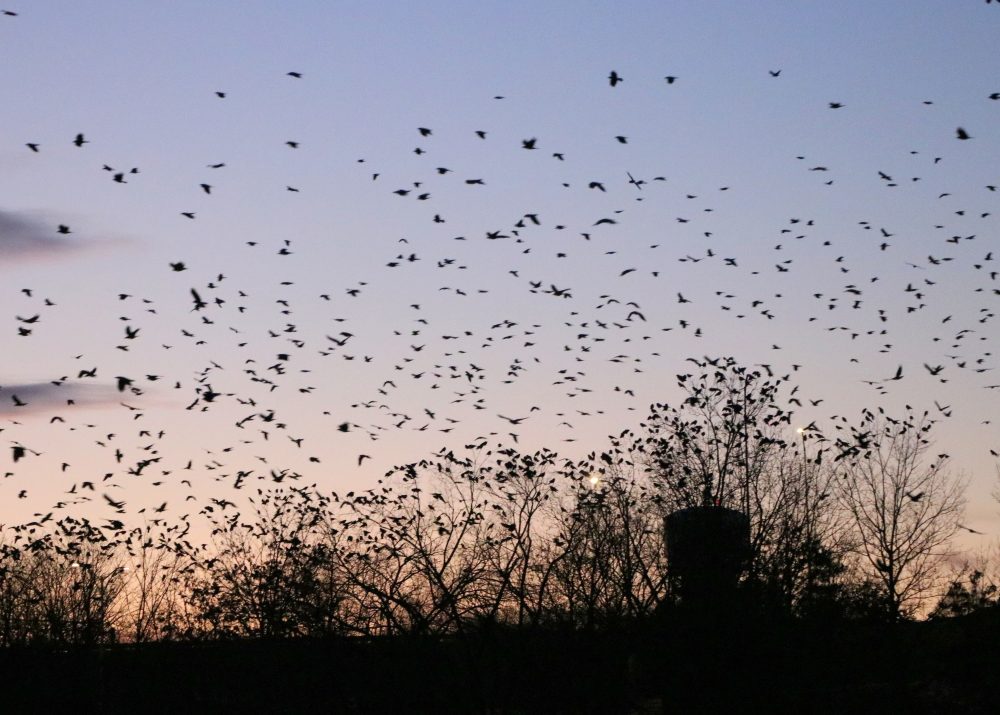 As the Crows converge into the overnight communal roost, they often surge up in chaotic flight up and away from the roost. They may circle a few times, in fairly close proximity, and then return back to perch locations, in the trees along Rt. 495, in the final roost area. This flight movement is often right above the upper deck of Rt. 495, and must be quite a show for passing motorists! the orange sunset sky provides a dramatic backdrop at almost 35 minutes after sunset time. 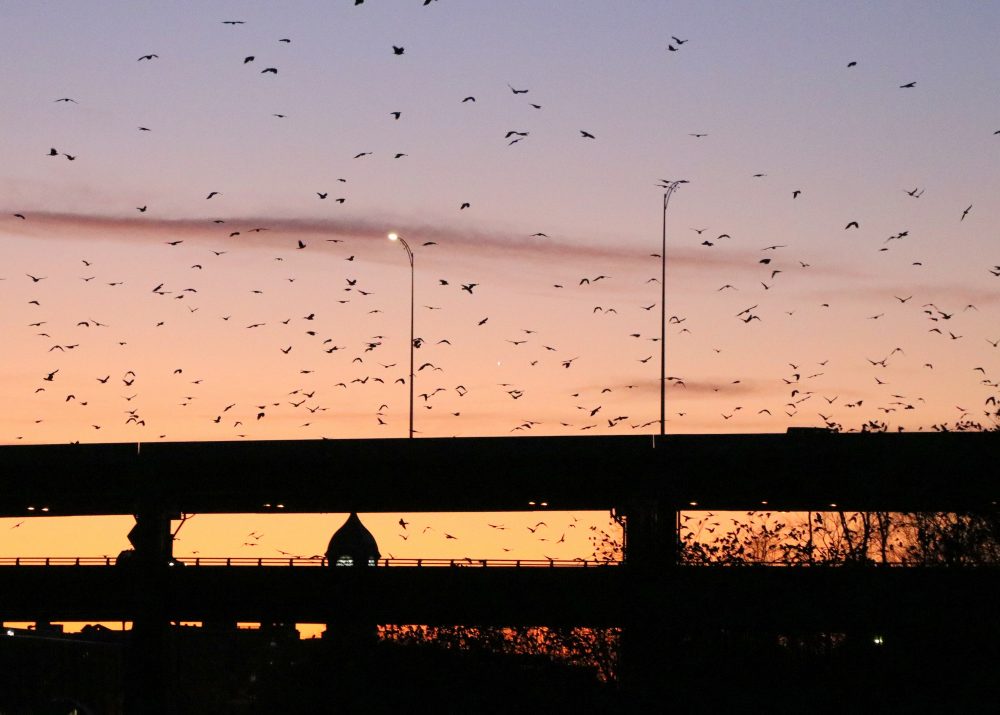 Just a few minutes later, the Crows seem to settle in and remain perched in the overnight roost area. The itchy flight action seems to subside and they pack in tightly for the night in the tree tops. 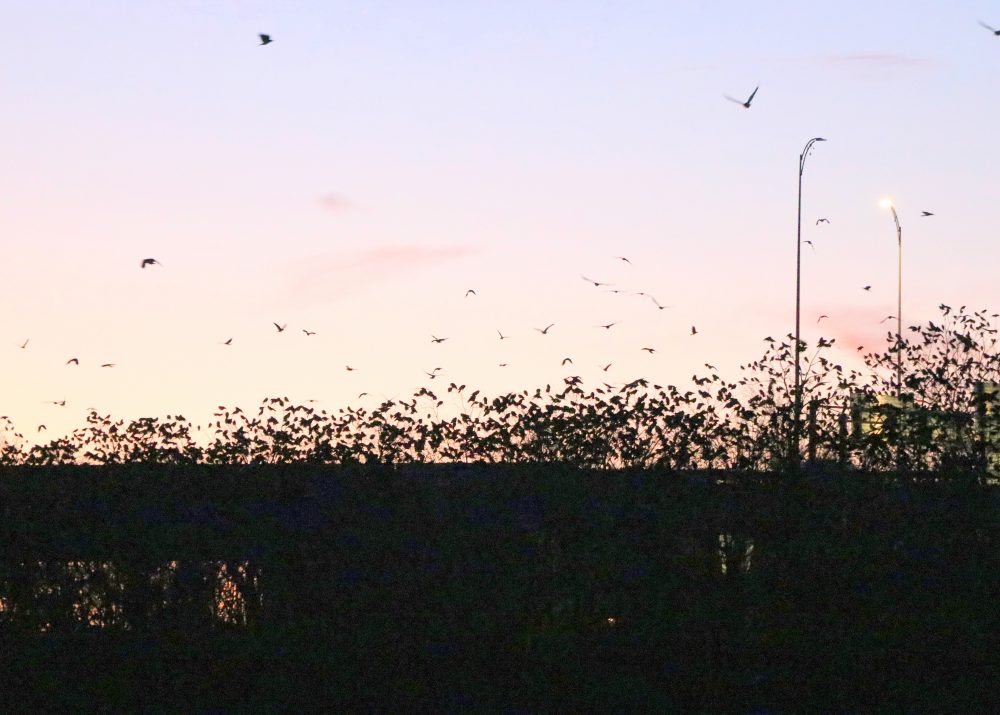 On my way home, had a brief moment to capture a quick image while driving northbound over the Rt. 495 Bridge. While driving in the far right lane, slowing down as much as possible, with very low light, looking east with the sunset behind me, was just barely able to fire off a few photos overlooking the extended roost area off to my right at the north end of the bridge. It was about 45 minutes after sunset, and even with the camera settings pushed to the maximum, it was tough to capture any sharp details of the crows in the roost, but it provides a sense of the trees along the north shore of the river and the extended area of the overnight roost. 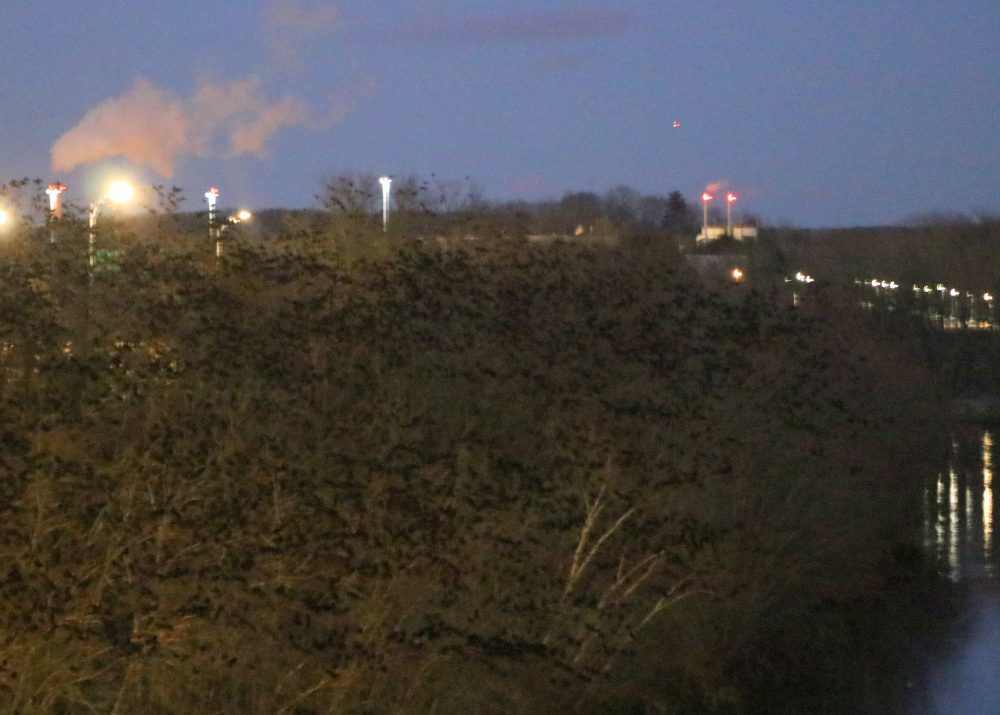 Finally, minutes later, while driving at the very north end of the bridge, and noticing the large numbers of Crows perched in the nearby trees, slowed down, pulled off to the side of the Marston street off ramp, and snapped a few images looking back in SW direction towards the remaining golden/orange sky before final darkness set in for the night. The nearby highway street lights provided some ambient lighting, and the clear sky background above the trees created a dynamic silhouette effect to complete the last moment for tonight’s first of the New Year Crow Patrol. The image below captures that moment with a car whizzing by in the lower left of the frame! 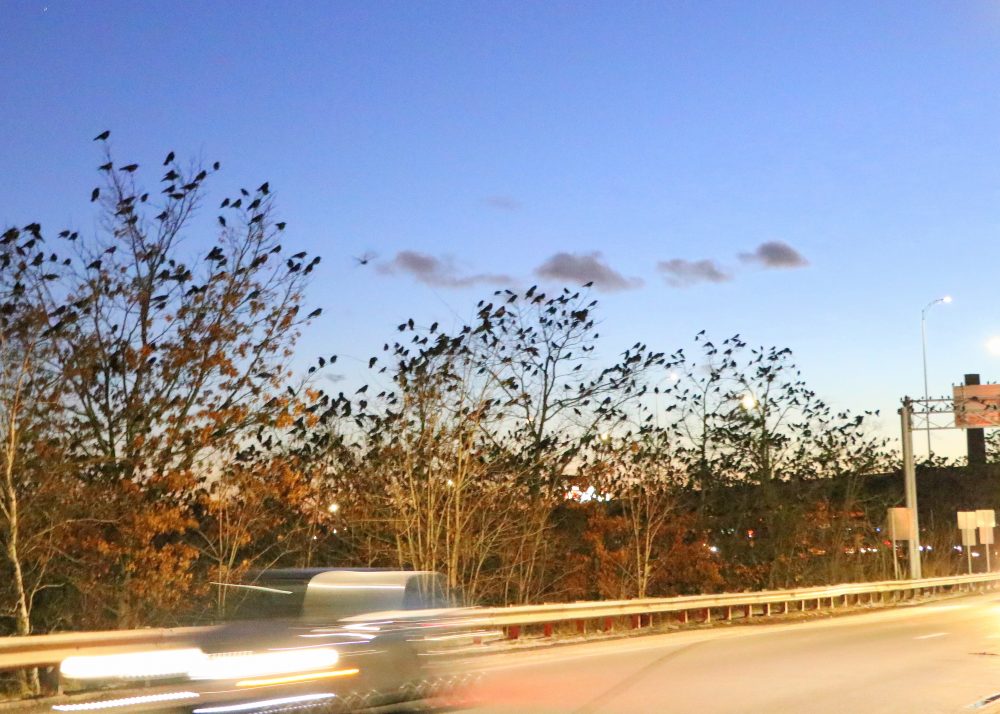 Below is a bonus image of the stunning colors in the sunset sky looking to the west from the south side of the Merrimack River about 6 minutes after sunset time. It is an exciting image with magnificent sky/cloud colors, colorful reflections off of the river, and silhouettes of the bridge and the smokestacks in the background. a beautiful city, in rebound mode, with so much to offer to so many! 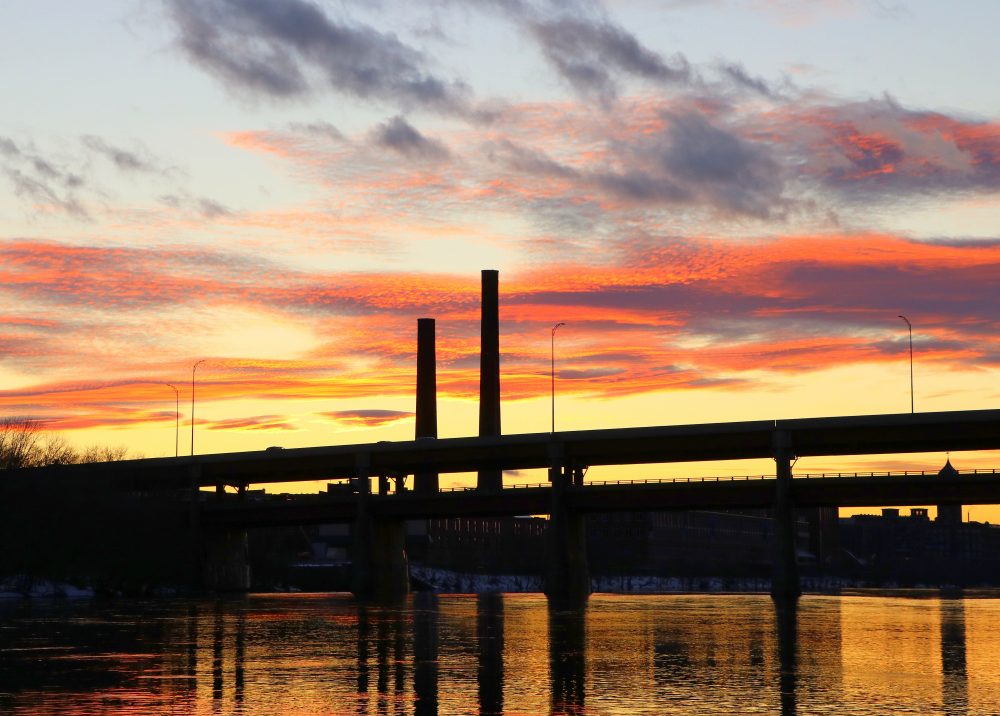 It was one of the most exhilarating evenings in a while! The conditions were ideal, the vantage points, and timing for each of the visits all worked out so well. The Crows put on another amazing display of aerial acrobatics and large scale coordinated movements that left me in total awe at the astounding mystery of how they make this all work in such a synchronized and harmonious way each night. Crows: very social, smart, and family-centered….WOW!