Out on Crow Patrol getting underway just after sunset time along Marston Street with Crow staging in trees near the medical building. Then headed up to open air roof area of McGovern parking garage. After scanning from east to west, discovered thousands of Crows covering both extended roof top areas of the B&D Advanced Warehousing complex. This image below, looking WSW, was captured about 22 minutes after sunset.

While the southbound train pulling out of the Lawrence station blew its horn, many Crows lifted off in flight in a northbound heading and towards the overnight roost. This image captured about 23 minutes after sunset time with diminishing light. 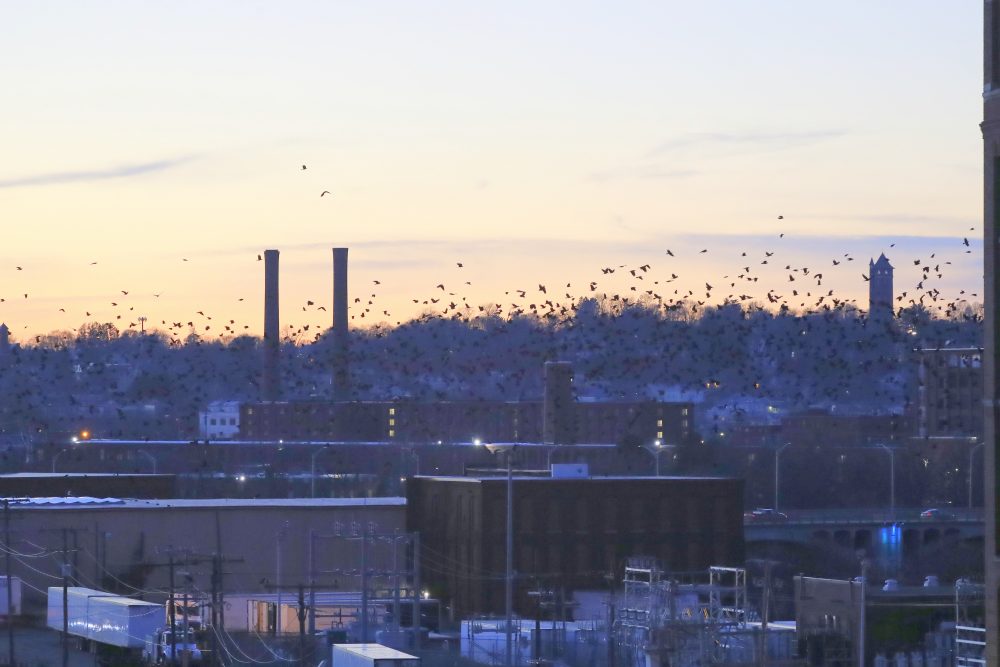 From just after 4:30 until just past 5:00PM, the crows made a very steady series of flight movements from these roof areas and over into the National Grid facility and beyond to the roost. The Crows were seen on rooftop edges and nearby utility wires. This image was captured about 27 minutes after sunset time. It is fascinating to watch how they hangout and then make the move to the roost!

The vocalizations were constant and loud the whole time. After moving around to take in the action from the Duck Bridge, it was awesome to observe the Crows lining up on many of the nearby rooftop edges before converging into the roost. Often times, the rooftop edge on the north side of the New Balance building is one of many favorite perch locations just prior to the final movement, directly below, into the overnight roost trees. This image below was about 33 minutes after sunset time. 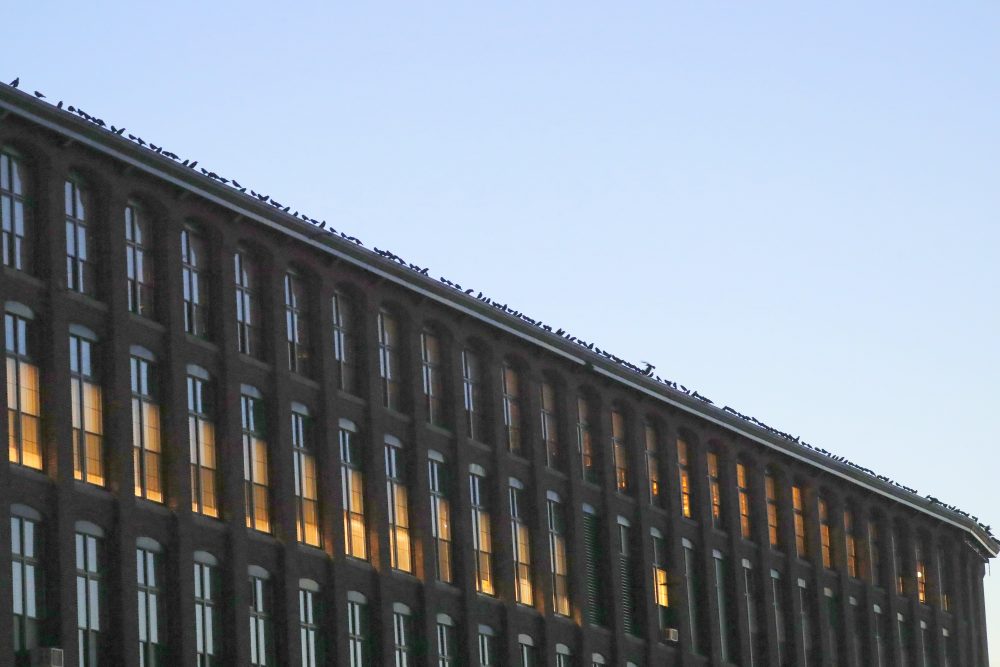 As the Crows settled into the roost the vocalizations diminished and they all settled in for the night with only very minor continuing movements within the roost! Last week, with heavy NW winds, it seemed like the roost may have been shifting to the west, but tonight it is again back closer to the New Balance building. These two images below provide a look from the Duck Bridge out over the extended roost area to the west of the bridge. The first image was captured about 95 minutes after sunset time. 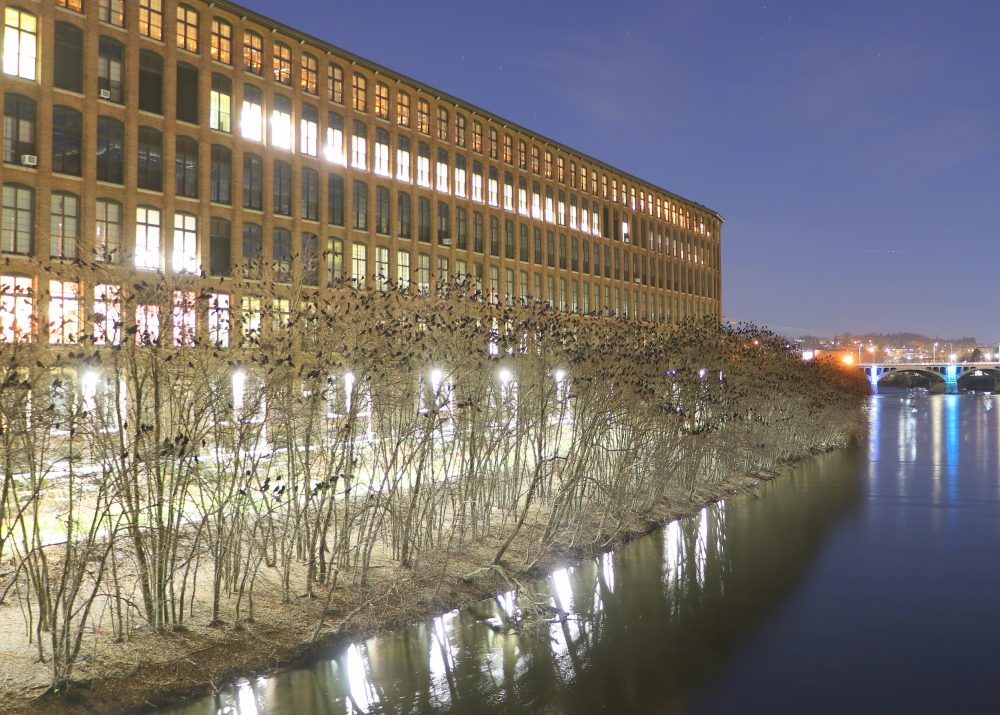 While remaining out on the Duck Bridge, stayed to capture one last image! These images after dark are possible by using a specialized and methodical approach with manual exposure and manual focus settings on the camera. It requires an effort to carefully adjust and balance ISO, shutter speed, and aperture settings.  Many test shots are needed to get things right! This image below was captured about 13 minutes later, just under two hours after sunset time. It provides a fairly crisp view down the line of the trees, and more importantly, the Crows in the roost!

At the end of tonight’s outing, it was an unexpected treat to be joined by friend with background in using drones for conservation biology studies. This is one of many dramatic aerial photos of the extended roost captured about 2.5 hours after sunset time. This overhead view, facing SE, primarily shows the back 2/3’s of the National Grid facility with Crows on the ground, on utility wires, and some rooftops at very rear. It provides a strong sense of equidistant spacing. More study is needed on how long they remain on the ground and under the lights, before flying off and entering the roost. 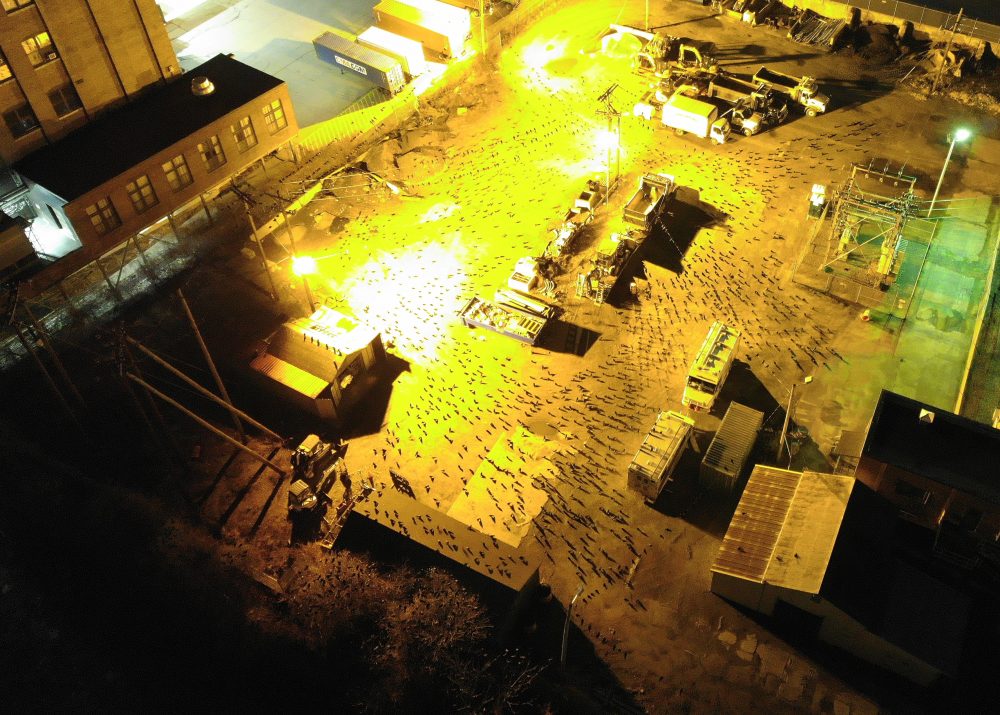 The counts, (now over 10,000 Crows) on each outing are always very conservative per stated eBird guidelines.