Out on Crow Patrol starting close to 4:30PM with initial stops along Marston St., Incinerator Road area, Pre-release Center, and then North Main Street. Crows started streaming in from every direction just after 4:35PM. Large concentrations farther downriver and out of sight. Many seen behind Pre-release Center. Consistent with last few weeks, once they started to converge towards the roost, lots of leap frog movements on the way in, and lots of flight bursts by groups, with a prompt return to the general roost area. The image below shows the initial surge of Crows in flight as they depart one of the final staging areas downriver about 15 minutes after sunset. 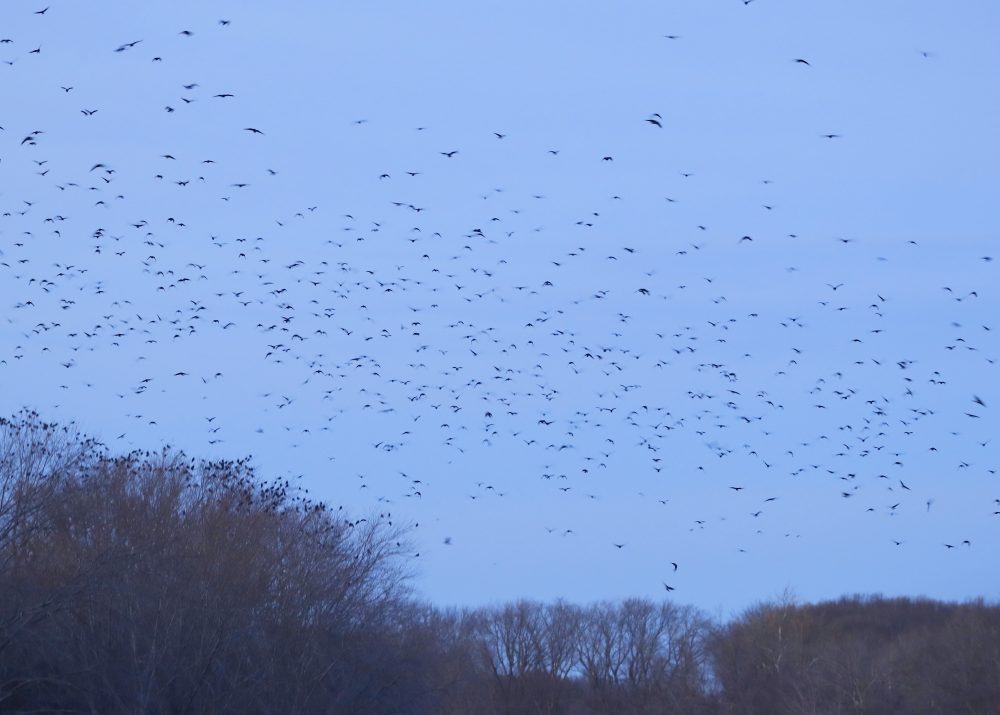 This streaming flight action continued for some time and it is a magnificent mystery to watch and behold along the gently flowing Merrimack River.  The flight action became more intense with thousands of crows filling the sky in both an orderly fashion and yet with lots of erratic twisting and turning flight patterns as well. The image below, taken a few minutes later, and towards the pastel colored sky, shows an amazing multitude of Crows swirling in flight over the Rt. 495 Bridge with passing commuter traffic below! 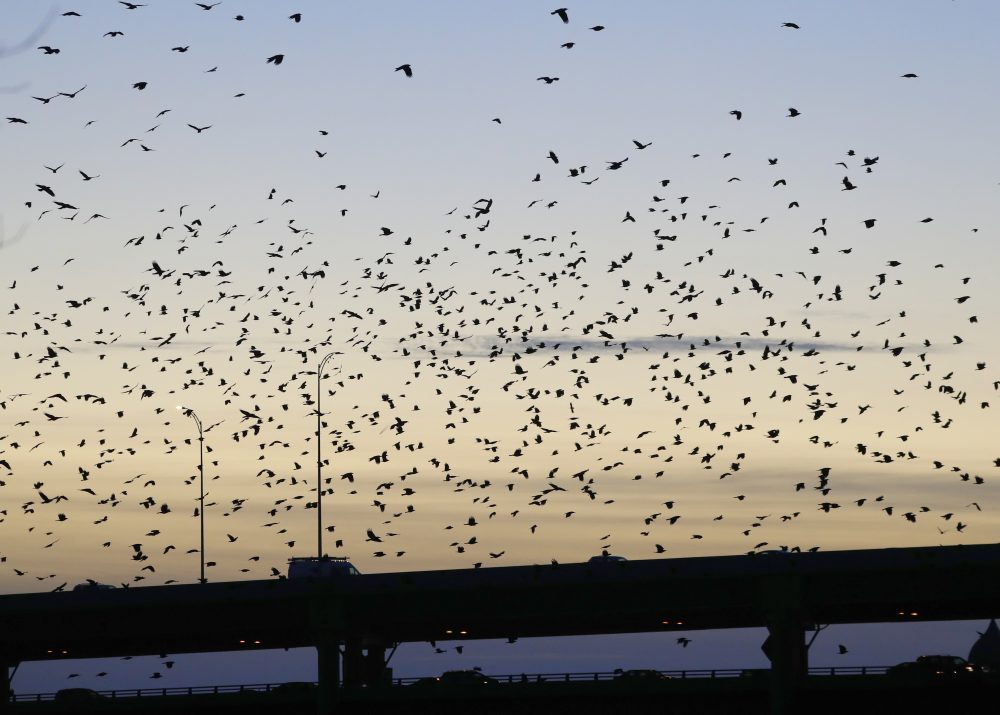 By 5:00PM, about 30 minutes after sunset, the Crows had started to settle into the overnight communal roost. The action around this time in the nightly sequence is always fascinating to watch.  The Crows start to settle in, more Crows converge in flight, some land and perch while others will pass by and continue to circle around.  At times, some, most, or all of the perched Crows will liftoff in a burst of flight and then return slowly back to the roosting area. It is often a whirlwind of noisy loud chaotic activity that takes your mind off of anything else! 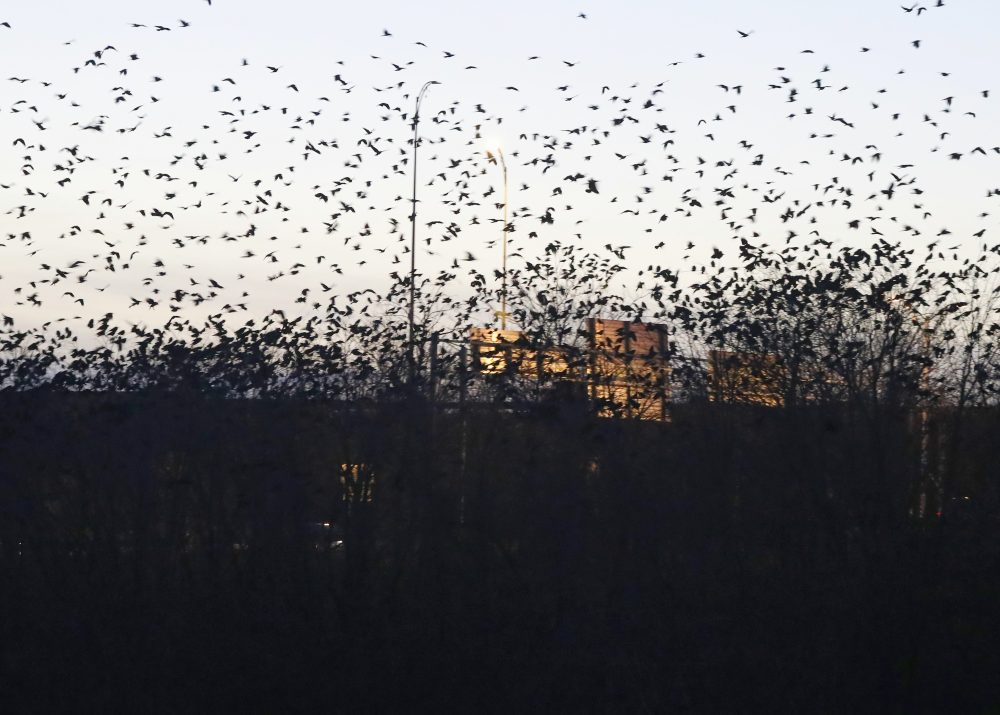 As often as possible, and especially on nights with clear skies and colorful sunset skies, I’ll make an effort to capture a few long exposure images. Long exposure photography is the art of using a slow shutter speed (long exposure) to capture the cumulative effects of time passing – in one image. This technique offers rewarding results – images that are unique and artistic. While perfecting the art of long exposure takes a bit of practice – and a lot of trial and error, the results are worth it! This image below had a 30 second exposure and was taken almost 45 minutes after sunset time. It presents a calm serene feeling in stark contrast to the prior noise and chaos from a short time before. 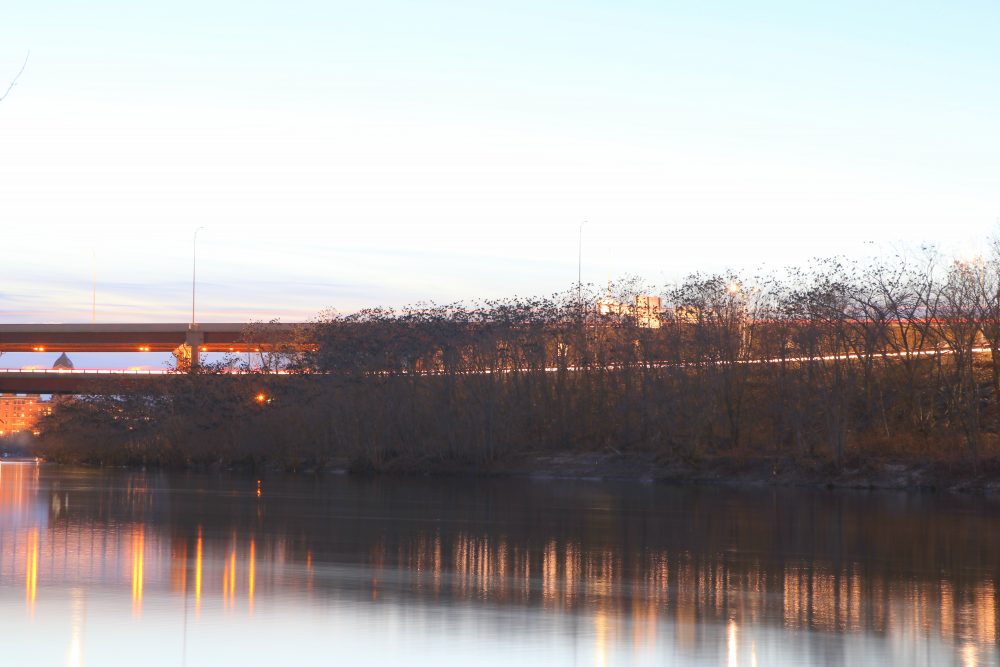 By 5:19PM, about 50 minutes after sunset, most of the Crows were settled in the roost and vocalizations were diminishing.  This final image, taken with night vision optics, show how the Crows become very tightly packed in to the overnight roost. The view is looking NW with the city of Lawrence Water Tower in the distant and blurry night time background. 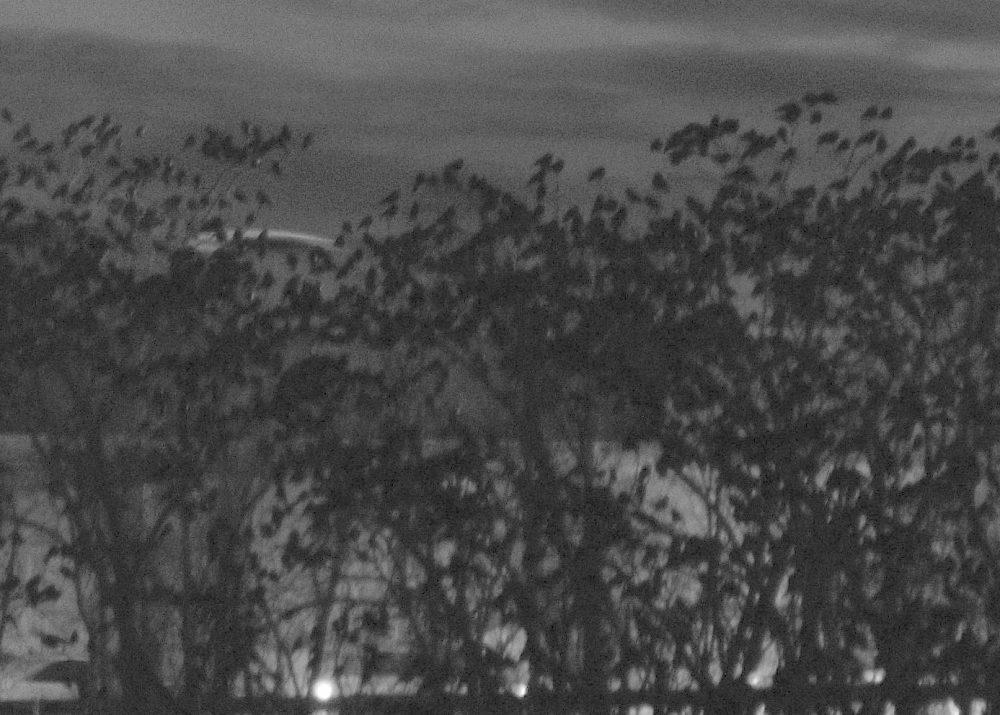