After dark and before dawn!

After arriving a bit early, scouting out the local area, and observing initial incoming flight streams in small numbers, met up with Allen Woodliffe, the local CBC compiler for the St. Clair NWR circle. Before retiring Allen was an ecologist who spent 36 years with the Ontario Ministry of Natural Resources. Allen has served as the count circle complier for many years and has a special interest and shared fascination with the overnight communal Crow roost. On Jan. 1st, 2023, with a team of 17 members, Allen just completed the 43rd CBC for the St. Clair NWR circle. He has served as the compiler since 1988! This Crow roost count for this circle has consistently been one of the largest in North America. Allen provide a rich history on the winter crow roost and a magnificent review of the local CBC over the years!

The initial buildup of the roost was observed with Allen from the middle of the Parry Bridge on Keil Drive over the Thames River. The bridge is a Scherzer type rolling lift bascule bridge, and provides wide open views out to the horizon on the west side with tall deciduous trees lining the banks on both sides. We watched the endless incoming flight streams, and the build up of Crows landing and perching in the area trees on both sides of the bridge. The muted orange and yellow sunset sky colors were dazzling. This image at 27 minutes after sunset time. 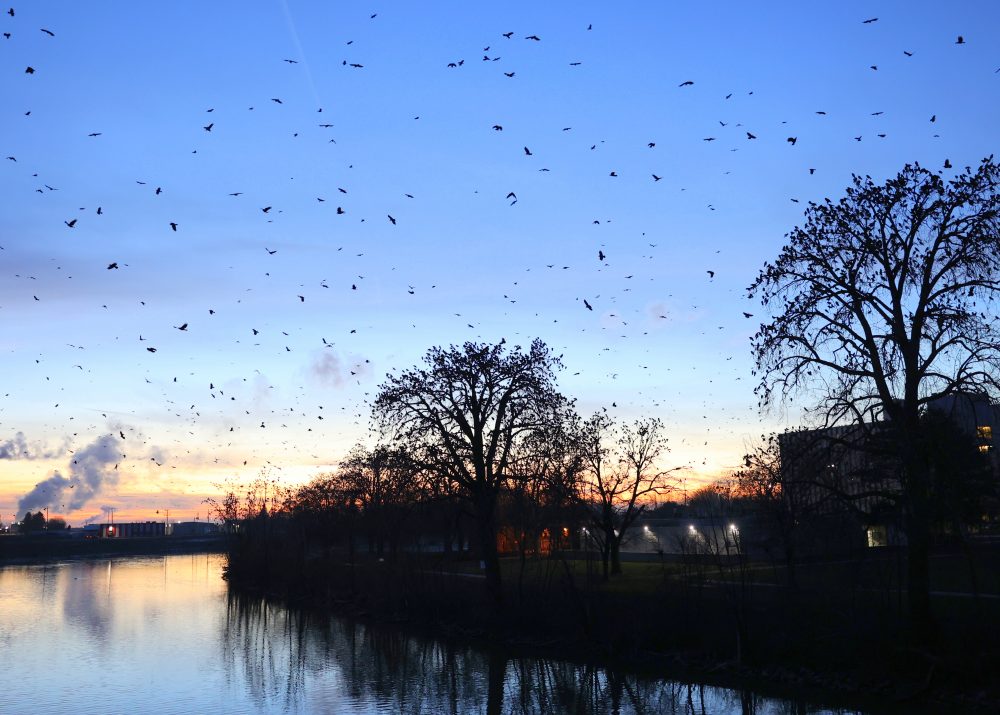 As Allen had indicated in advance, the biggest buildup of roosting Crows was on the west side of the bridge, on both sides of the Thames River, in the trees, on nearby rooftops, and large numbers were seen mulling around on the ground in the parking lot behind the Enbridge Gas building, and by the nearby lighted tennis courts. Enbridge is Canada’s largest natural gas storage, transmission and distribution company. This image at 54 minutes post sunset. 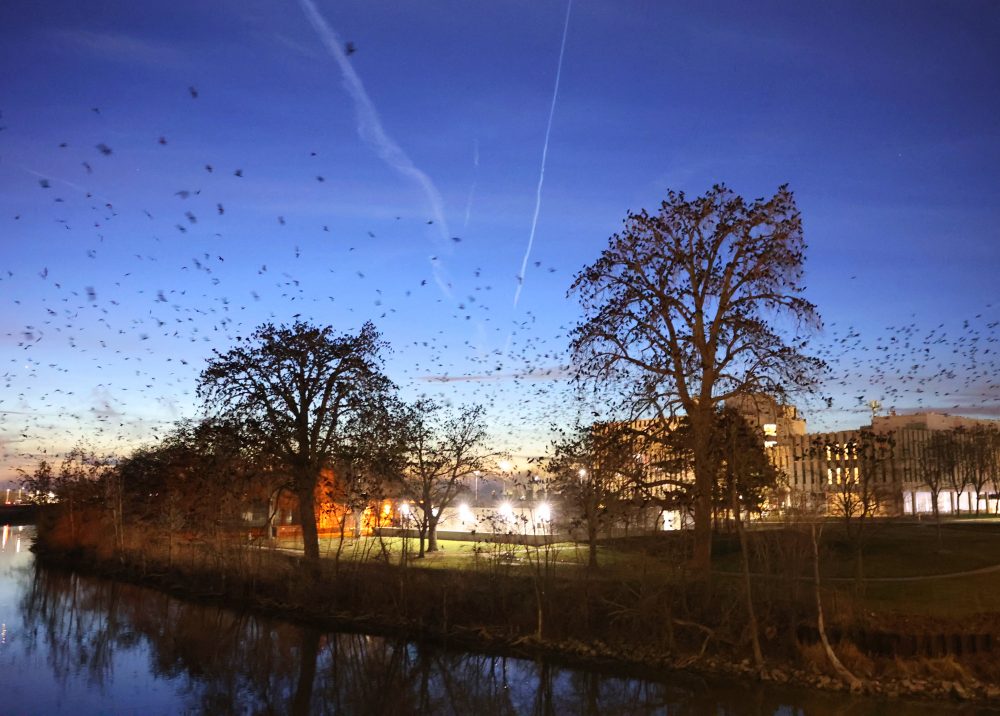 As often happens, the Crows made a number of flight burst loops from the north side trees out over the river and back again. This image about 33 minutes before sunrise time with loud and growing vocalizations. 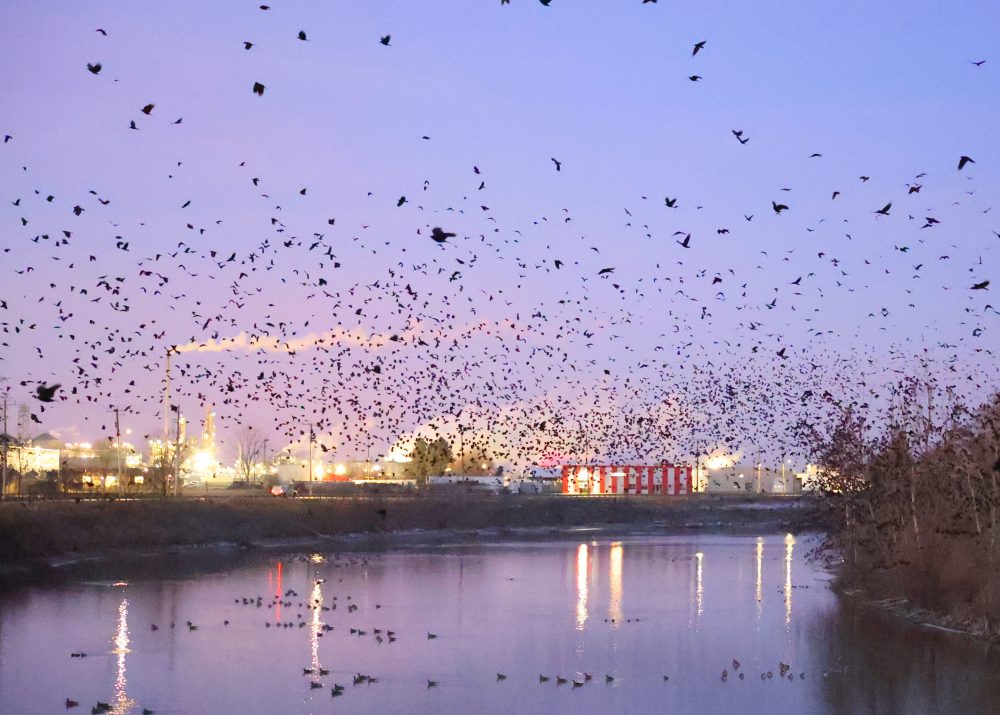 While standing on the Parry Bridge and mostly facing to the west, there were an endless number of departing flight streams at full throttle and heading off to day time foraging grounds. This image at 20 minutes before sunrise time. 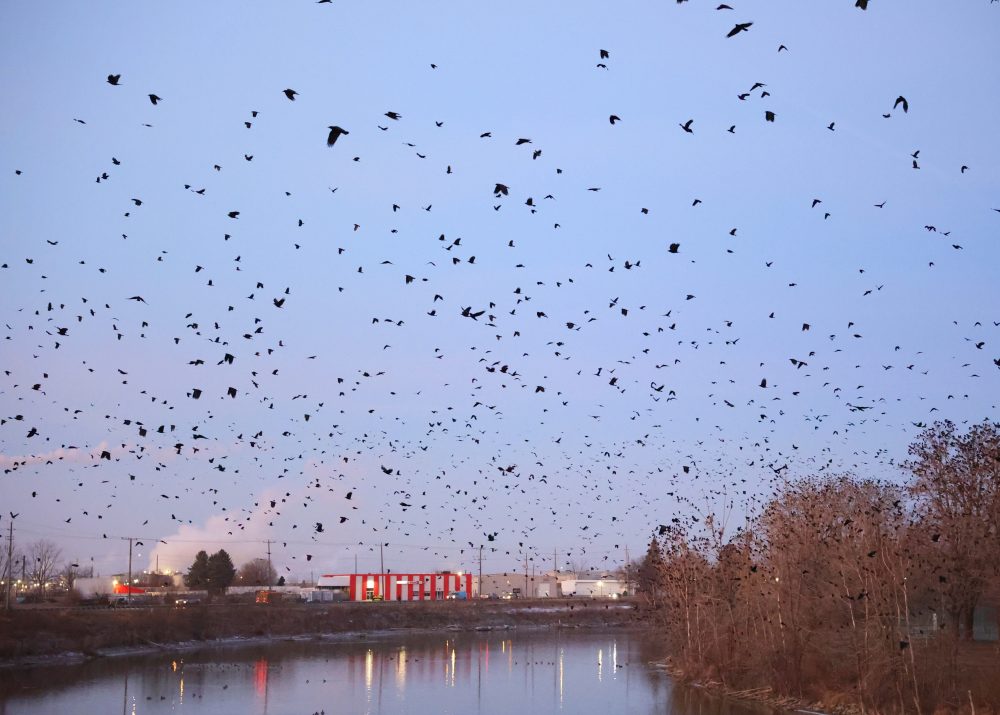 Note on counts/estimates: we are now using improved methods for counting the large number of Crows while streaming, staging, and in the roost. For all images, we use both a modified open source counting software program, as well as a hand count approach, while outside next to the roost, to carefully document our observations and to significantly increase reliability and accuracy of the presented numbers. Please refer to our new roost counting guide on main page.

Photo gear used for most outings: