Out on Crow Patrol with scouting visits to endless number of locations around prior roost area on Brook Street. Then we scoured a search area working with a two mile radius out from Brook Street area; to the E/N/W and with little incoming flight or small group perching action found anywhere. While double checking around the extended campus of Lawrence General Hospital, on a hunch the Crows might have doubled back, about 20 minutes after sunset time, we were so happy to discover the Crows. While driving south on Prospect Street, just before the emergency center, the Crows burst out in flight. This image below, looking south from 38 Marston Street, at the Crows moving in the distance, from SW to NE, was captured about 21 minutes after sunset time. 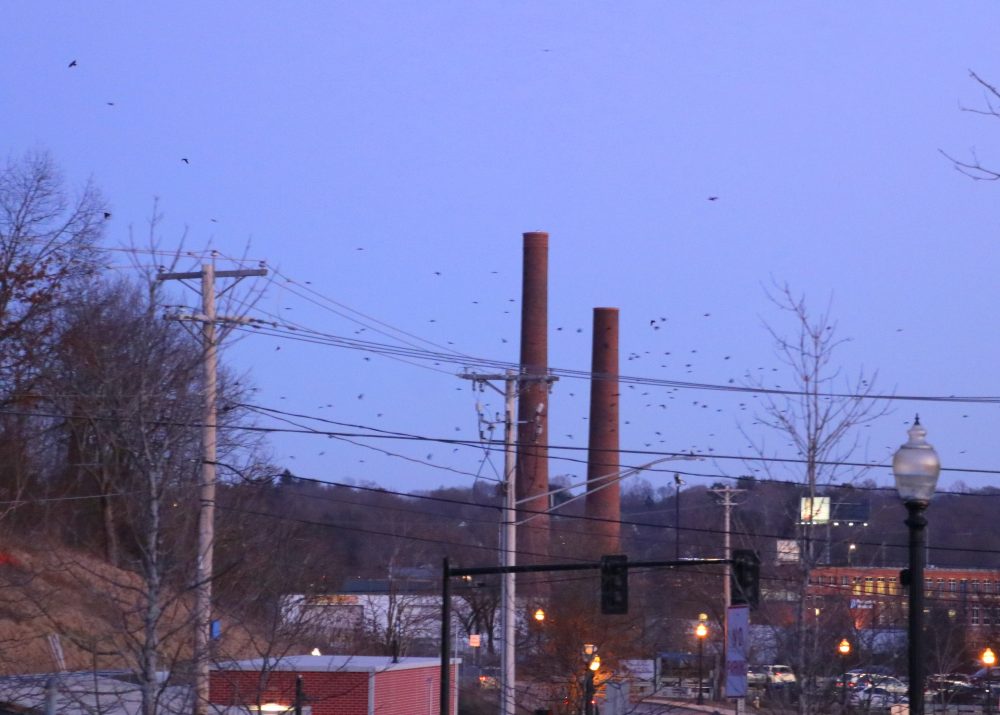 We quickly moved down to Marston Street, just to the east of the Marston Medical building. From the south side of the street we observed multiple flight bursts from Crows lining the trees on the north side of Marston Street from Storrow Street to Prospect Street. The vocalizations were a bit muted, likely due to constant passing traffic noises. this flight burst image below was captured about 30 minutes after sunset time. 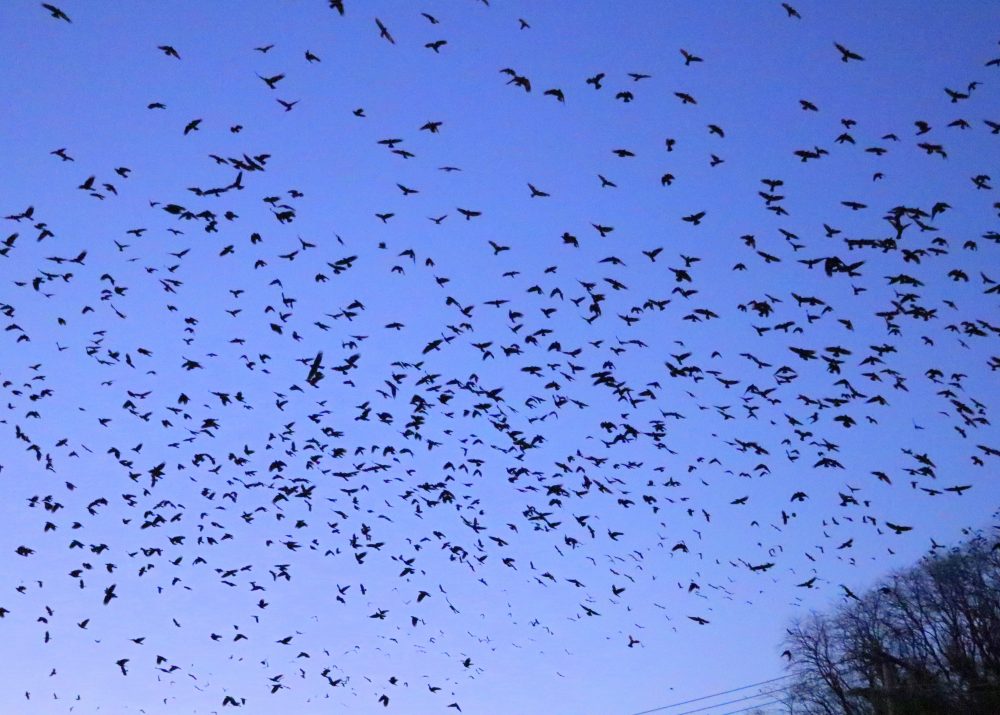 These flight bursts are exhilarating to take in! Somehow, the Crows have a synchronized ability to lift off, almost all at once, and with no apparent trigger that sets them off. On some nights they will circle out over the roost area, and return as before; at other times, they will leapfrog slightly in a new, or continued direction, until the roost is ready to settle done for the night. The image below, was captured minutes later, and after they had resettled from prior burst. 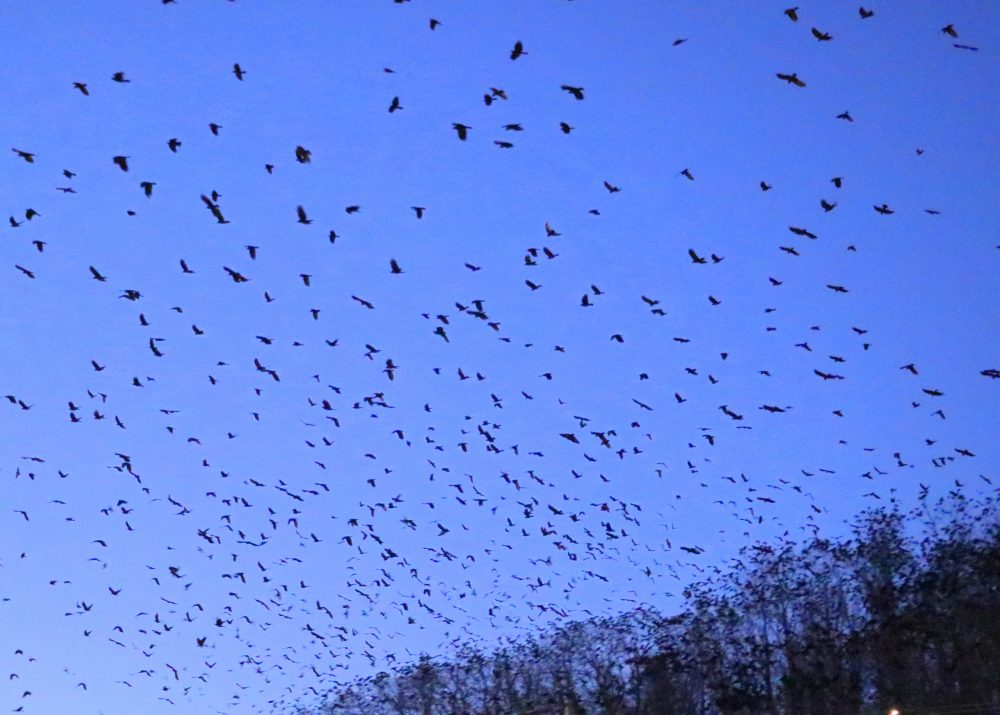 By about 35 minutes after sunset time, the Crows were settling in for the night in the trees along the north side of Marston Street. This patch of trees runs up a hillside and is bordered above by the very south end of High Street, Stevens Court, and Storrow Terrace. The image below shows the Crows getting well settled in for the night. This is a very unusual return to this area after they had made their way north from the Prospect Street area by the hospital.

After the roost seemed settled in, made a quick tour of the area up on Prospect Hill at the south end of High Street and around the Geisler Memorial Pool complex. The Crows were seen perched in the trees surrounding the very well lit pool complex. The image below captured about 45 minutes after sunset time. Those crafty Crows, once again, keeping us on our toes. Another terrific night out on Patrol! 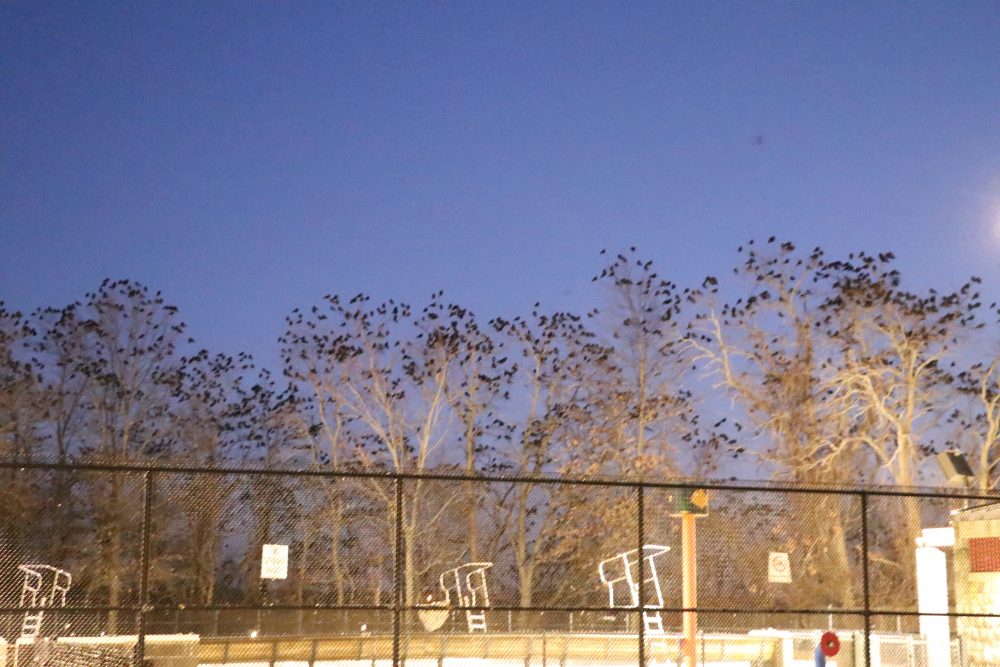